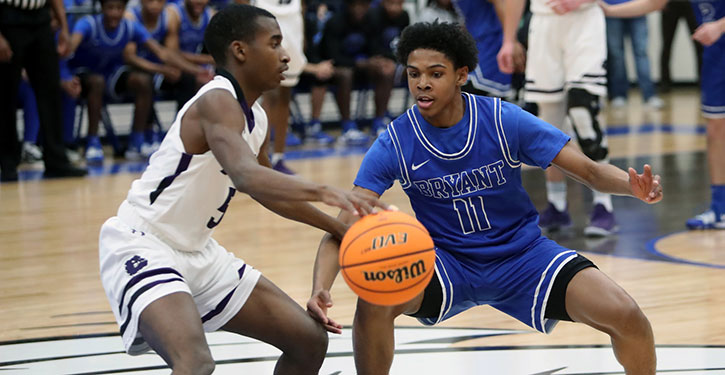 In their season of calamity and adversity, the Bryant Hornets often found themselves over-matched by their opponents, particularly those with height and size and athleticism. But as often as not, through hustle and skill and perseverance, with some hot shooting and some gutsy defense, maybe a trap or a press, they somehow found a way to win.

On Friday in the quarterfinals of the 6A State Tournament at their own Hornet Arena, the Hornets were in that position again. As had been the case in their first-round victory over the Van Buren Pointers, they used their depth and hard work to overcome big foul trouble to key players and wound up leading much of the game. It helped that Fayetteville was in foul trouble too.

But in a game of attrition, in which a whopping 58 fouls were called including 17 offensive fouls, 12 of which were charges, resulting in 75 free throws between the two teams, Fayetteville’s depth of talent and size proved too much for the Hornets to withstand.

It was the first of the tournament for a 6A-West boys team. The other five entrants from that conference had been eliminated by then. The second-seeded Bulldogs, 20-8, advance to take on Conway, who had ousted 6A-Central Conference champion, North Little Rock, in the semifinals on Saturday.

The Hornets’ star-crossed season concludes with a 17-12 record and all sorts of ifs and buts to think about if they choose.

“I’m very proud of them,” said Hornets head coach Mike Abrahamson. “O.J. and Kayleb West are just such high-character kids. They come to practice every day. I’m so proud of them for sticking it out. Then Treylon comes to us from Episcopal and spends two years with us and is just incredible for us. And A.J. (Jenkins) is one of my favorites all time. He didn’t hardly see the floor as a sophomore and improved so much. He became such a great player for us. He meant so much to us and carried such a burden. He’s an incredible, incredible competitor. I just love him to death.”

Jenkins finished with a team-high 18 points before fouling out. Payne had 16 but hardly played in the first half due to foul trouble. Sophomore Khasen Robinson scored 12 and junior Camren Hunter, hobbled by an ankle injury, gamely produced 7 points and a team high six rebounds off the bench.

“Injuries are a part of the game,” Abrahamson acknowledged. “He couldn’t go yesterday, and he tried to go today. He did the best he could and everybody else did the best they could around him.”

Hunter, at 6’3”, along with sophomore Will Diggins, at 6’2” are the tallest Hornets

Tamaury Releford, a 6’6” junior led the Bulldogs with 18 points and nine rebounds. He spent much of the night in foul trouble, but he had 6’6” back-ups in Hank Gibbs and Arthur Cox to sub in.

Gibbs, the Bulldogs’ quarterback last fall, spent much of his time on the gridiron on his backside against the Bryant defense. Friday, he, again, spent a lot of time picking himself up but, this time, mostly it was after taking some of that rash of charges.

Somehow, the Bulldogs were cited for technical fouls three times, yet survived.

Sophomore Landon Glasper came off the bench for the Dogs to score 15 points. Connor Barnett had 10. Isaiah Releford and C.J. Williams added 9 each.

“We’re not going to complain about the officiating or make an excuse about it,” said Abrahamson. “It was what it was, but it was that way for both teams. Their size, their depth, that’s what it was. They were just able to withstand it more down the stretch.

“And they’re big, Releford, is just so difficult to deal with,” he added. “There were so many calls, they were able to get him in on offense and get him out on defense. Their depth won out.

“Releford was the guy. We couldn’t match up with him. He’d catch it so deep, we couldn’t double team and, when we fronted him, they do such a great job with the lob over the top. We tried a couple of different approaches but, really, he’s just that good and they’re that good at getting it to him.”

Part of Releford’s foul trouble came on the offensive end. After Diggins got into early foul trouble, Austin Schroeder, a 5’11” guard who stepped in at center to frustrate Van Buren’ big man Brayden Gilmore on Thursday, drew the assignment and a couple of those fouls.

But the Bulldogs played intelligently, looking for their big man in the post and getting it to him close to the bucket. And, despite their obvious disgust for the officiating — the three technical and several of the offensive fouls — they went to school on the way the game was being called and made hay attacking the basket down the stretch. With no one of size inside, those drives produced.

The Hornets did a lot of that too but with Fayetteville’s size, it was a more difficult thing to do. They launched 29 shots from 3-point range but only made six of them, a far cry from the shooting they had done in past games at Hornet Arena.

The game went in surges. Fayetteville jumped out 10-4 but Bryant responded and tied the game in the final two minutes of the opening quarter.

With Payne already on the sideline with two fouls and Hunter yet to enter, the run began with an offensive-rebound basket by Jenkins, who, next time down the floor, drove inside and dumped off to Diggins for a basket. A free throw by the point guard trimmed the margin to 10-9.

Diggins picked up his second foul and was brought to the sideline. Gibbs converted at the line to make it 12-9 but Jenkins fed Robinson for a triple that tied the game.

A free throw by freshman Cory Nichols tied it then, off a turnover, Nichols drove and kicked out to Schroeder who hit a 3 to give Bryant an 18-15 advantage.

With Jenkins scoring half of his 18 points in the quarter, the Hornets kept hanging around. In fact, they took a lead that was as much as 6 before the half was over. Fayetteville cut it to 26-23 on a trey by Barnett but Jenkins fired in a bomb to make it 29-26.

With 1:18 left in the half, Williams popped a 3 but Jenkins beat the buzzer with a drive to the rack to make it 31-26 at the half.

The Hornets would eventually build the lead up to 10 with Payne hitting a 3 and Hunter scoring as he was fouled.

The Bulldogs went right to work finding Releford, who scored their next 9 points. Only a 3 by Payne interrupted. Still, the Hornets maintained the upper hand. A 3 by Robinson at the end of the period increased the Bryant lead to 52-47.

Despite the fouls piling up, the Hornets held onto the advantage until Releford’s offensive-rebound basket gave his team the lead with 4:31 to go.