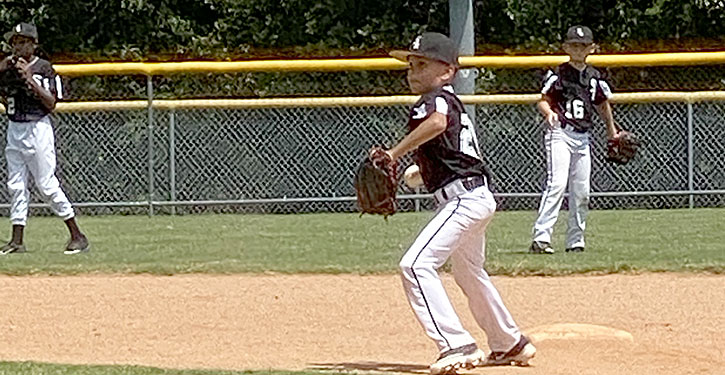 SHERWOOD —With a win on Friday night and another on Saturday morning, the Bryant Black Sox 8-year-old All-Stars got off to a strong start at the Cal Ripken State tournament for their age group. In a third pool play game, however, they stumbled.

On Friday, the Bryant Stars defeated Sylvan Hills 14-8. Saturday’s first game was an 11-1 win over the Paragould Patriots. They followed up with a 16-3 win over the rival Benton All-Stars. Their lone loss of pool play was to eventual number one seed, Paragould Lumberjacks..

Bracket play is set for Sunday. Bryant is the 2 seed and will take on Sylvan Hills, the 3 seed, at 4:30 p.m., for a chance to play in the championship game at 6.

Sylvan Hills scored four in the bottom of the first to make it a one-run lead for Bryant.

In the second, however, Hall, Gore and Trusty singled ahead of a double by Lewis. Olson traded places with Lewis as he doubled to left, making it 9-4. With two out, Schultz’ single got Olson home to make it a six-run lead.

Sylvan Hills managed just one baserunner in the bottom of the second and, in turn, Bryant continued its onslaught.

Hutchins started the third with an infield hit then Lowden singled to left. Hall had a knock to left as well. Trusty’s infield hit with one out and Olson’s two-out double to right-center made it 14-4.

Sylvan Hills rallied for four more in the bottom of the third but neither team scored in the fourth as the Sox closed out the victory by retiring the Bears 1-2-3 in the home half.

Gore and Trusty each had three hits in the game with Gore bashing a home run that capped off the Black Sox’ scoring in the bottom of the third. Travinski added two hits.

Bryant held the Patriots without a run until they scratched one out in the third.

The Sox took a 3-0 lead in the bottom of the first on base hits from Gore, Trusty, Olson, Travinski and Schultz.

Hutchins led off the second with an infield hit. With two down, Gore, Trusty and Lewis popped consecutive singles as the lead grew to 5-0.

After Paragould dented the plate in the top of the third, Bryant went back to work. Travinski led off with an infield hit then Baker singled. Schultz grounded into a force at second, but Mosley singled in Travinski. Doubles by Lowden and Hall drove in runs before Gore’s blast set the final score.

In the top of the fourth, the Patriots got their lead-off man on but the next batter popped to Olson at first, who made the catch and stepped on first for a doubleplay. A strikeout ended the game.