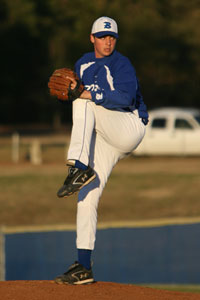 The main thing that Bryant High School baseball coach Kirk Bock wanted see from his team as they scrimmaged the Pine Bluff Zebras on Thursday night at BHS field was whether or not his players were getting it. Had they processed all the information and instruction they had received in preparation for the 2009 season.

The Hornets won the contest 7-3. Eight different batters had a hit and four pitchers allowed just three to the Zebras while issuing just two walks and striking out 10.

“The pitching did okay,” Bock stated. “And our defense played well. We threw a ball away and had an errant pick but I don’t think we actually booted a ball.”

Indeed all three Bryant miscues came on throws and none of them played into the Pine Bluff scoring.

“I was pleased,” Bock said. “We’re still light years away. We’ve just got to go back tomorrow, get to work and kind of cinch things up.”[more]

The Hornets struck for three runs in the first and two in the second to gain an early lead as Ben Wells shut out Pine Bluff without a hit in his two innings on the mound. 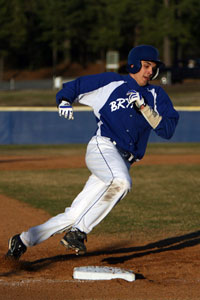 g. Brennan Bullock drew a lead-off walk, took second on a passed ball and eased into third when Garrett Bock got down a nice bunt in that direction. Bock then swiped second and both raced home when Tyler Sawyer smoked one to right for a triple. With one down, Brady Butler was hit by a pitch and, with two down, Caleb Milam came through with an RBI single to make it 3-0.

In the second, Justin Blankenship beat out an infield hit but was forced at second on a bouncer to short by Bullock. A relay throw to first went astray and Bullock wound up at second. He scored from their when Sawyer’s two-out pop up was dropped in shallow right by Pine Bluff second sacker Brandon Maddox. Another passed ball got Sawyer to third as Kaleb Jobe drew a walk. Butler then came through with the two-out RBI single.

Milam relieved Wells in the third and issued a lead-off walk to Torey Deshazier. A single by Jeffrey Garrsion and Anthony Graham’s groundout had runners at second and third when Maddox fouled off a pair of two strike pitches before lifting a sacrifice fly to right to get the Zebras on the board. A pitch later, Claude Johnson cracked an RBI double to right to make it 5-2.

But Milam struck out clean-up hitter Deion Smith to keep it there.

Jobe worked around an infield hit and an error in the fourth for the Hornets but was burned by a lead-off walk in the fifth. Garrison, who drew the pass, stole second, advanced to third on a balk (which Bock disputed) and scored on Graham’s bouncer to short.

But Jobe finished his stint on the mound with a pair of strikeouts.

The Hornets got the run back in the bottom of the fifth. Landon Pickett led off with a single to left, took second on a wild pitch and third on a passed ball. With one out, Evan Jobe drew a walk, Austin Queck was hit by a pitch and, with two down, Jordan Taylor drew a pass to force in the run, making it 6-3.

Sawyer took the mound in the sixth and closed out the game by retiring six of the seven batters he faced, three on strikes. The lone base runner came on a throwing error with two down in the seventh.

Bryant added an insurance run in the sixth when Hunter Mayall led off with a sharp single to center, took second on a sacrifice bunt by Jonathan Wade and advanced to third when Pickett walked and Lucas Castleberry was hit by a pitch. A wild pitch allowed Mayall to sprint home.

The Hornets had more opportunities to score, stranding 11 in the contest, and that was one thing that Bock mentioned would need some work.

“Two-strike hitting,” he stated. “It’s hard for you to gain consistency if there’s not consistency around you but, that’s what I was telling the kids, if it’s close enough to call, you’ve got to have a good approach up there. And that’s things that we work on. They’re just not fundamentally sound at it yet. But they will be. Until they can just relax, see it and hit it — those are successful hitters. When you’re having to still think about, you know, ‘what do I need to do?’ that slows you down and you have problems.”

The Hornets are scheduled to officially open the 2009 season against the Searcy Lions on Monday, Feb. 23, at 7 p.m., in the first round of the Benton Panthers Invitational Tournament.