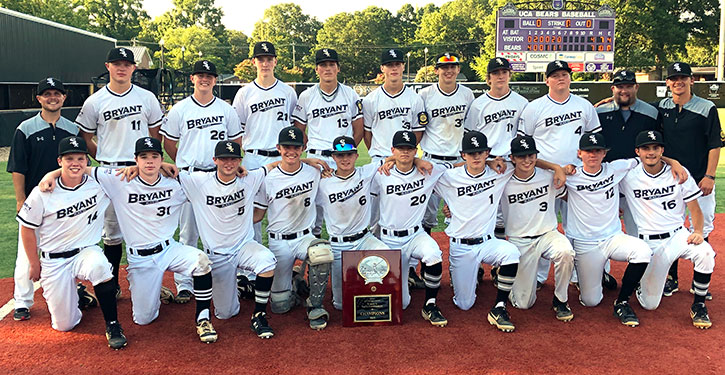 The Bryant Black Sox have played in seven tournaments this season and, in four of them, Sears started on the mound in the championship game. The Sox won all four including Tuesday’s 7-4 victory over the Benton Sportshop Dirtbags of Bauxite in the championship of the 2019 Junior American Legion State Tournament at UCA’s Bear Stadium.

Shortstop Noah Davis was named the tournament MVP for going 9 for 17 (.529) at the plate in Bryant’s five games and flashing the leather in sometimes eye-popping fashion, leading a sound defense that committed just two errors in the entire tourney.

The Black Sox finished the season with a record of 29-7.

“Great season,” said Hurt. “And I think they learned a lot. And we got better in a lot of spots. I think every one of them learned something along the way and that’s really all you can ask for.”

Add-on runs proved decisive for the Black Sox who scored four in the first and another in the fourth. The Dirtbags scored two in the second and two in the top of the fifth to get within 5-4. Bryant added a run in the bottom of the fifth and another in the bottom of the sixth as lefty Tyler Bates came on in relief and made like a closer, retiring six of the seven batters he faced, four on strikes, to earn the save.

The Sox had 11 hits in the game, including three for Speer and two each for Riggs and Hathcote. No Bryant batter struck out.

As for Sears, in the four championship games he pitched in, he worked 21 innings, allowing six runs on 22 hits. The four he gave up to the Dirtbags doubles what he’d given up in the previous three title game appearances.

“But then he comes back in a mid-week game that following week and just slams it against somebody,” the coach continued.

And, working in the semifinals of two other tournaments, he pitched a complete-game shutout over Texarkana then allowed three runs on seven hits in another route-going start.

“I think he was a reliever last year and I remember us having a conversation and deciding we were going to use him as a starter,” Hurt recalled. “The way it worked out in those tournaments, it seemed like every championship game, it was Sears. He was right there and ready to go and he did awesome. He was fantastic the entire season.

“Today he did good,” he asserted. “They were just blooping it around.”

Bates hadn’t pitched at State until he closed out the win over Texarkana on Monday with a 1-2-3 frame, then worked the last two innings of the title game.

Folks, who hadn’t seen the Sox this year, were asking, “Where has he been?”

But the championship game was the first that was close enough at the end for the Sox to need a closer.

“Bates was itching to pitch the whole tournament,” Hurt related. “He wanted in so bad. We were saying, ‘Just wait. You’ll get your opportunities.’”

The Sox came out aggressively in the bottom of the first inning. Aided by three Benton errors, they scored four runs.

In the top of the first, Sears struck out the side around a one-out bloop single to right by Junior Acosta.

Speer led off the bottom of the inning with a double and Riggs singled him home, taking second on the late throw to the plate. With one out, Parker slapped a single to right to drive in Riggs. An errant relay to the plate was wild so Parker went to second.

An errant pickoff throw, with no one covering, allowed Parker to advance to third. With two out, he scored Hathcote’s single to left.

A pitch later, Morgan hit a grounder to third that resulted in a wild throw to first. The ball went down the sidewall in right field and Hathcote scored all the way from first to make it 4-0.

Dakota Clay made a bid to drive in Morgan but his deep fly to left was tracked down by Cole Babcock.

“It was just one of those things where, you know, against Jacksonville (Sunday) they saw a hard-thrower,” Hurt noted. “Yesterday’s pitcher (for Texarkana) threw hard. But today, this kid was a little bit softer and I think our guys were just seeing it really well.”

In the top of the second, Jackson Regan was hit by a pitch and Austin Hillis pulled a single into left for the Dirtbags. Dawson Goines’ pop to right fell in for an RBI knock then Ethan Mathews got a fly to right to fall in at the foul line, loading the bases.

Babcock delivered a sacrifice fly to make it 4-2 then, with the top of the order coming around, Sears struck out Caleb Goins and Acosta to preserve the lead.

Benton starter Reece Rowland settled in for the second inning, pitching around a one-out walk to Speer and another single by Riggs. Davis hit a liner that was caught in center then Parker popped out.

Sears walked Easton Dinwiddie to start the third, but Sears set down the next three with Speer making a fine running catch in deep center on a drive by Reed Gautreaux.

A walk to Dillon and a single by Hathcote had the Sox in business in the bottom of the third. Morgan sacrificed them to second and third but on a hard shot right by the bag at third, Hillis, the third baseman, quickly tagged Dillon who was just a couple of steps off the base, then first to first for a doubleplay.

But the Bauxite team was set down in order in the top of the fourth and Bryant tacked on in the home half when Speer dumped a double down the right-field line that Gauxtreaux nearly hauled in. A wild pitch sent Speer to third and he scored on Riggs’ groundout.

Davis belted a double to the base of the fence in left for a two-batter. Parker followed with a lined shot to left that was caught.

In the fifth, Caleb Goines yanked a shot inside the third-base bag for a double. Acosta beat out a bunt single then stole second to put both in scoring position.

Searns struck out Dinwiddie then got Gautreaux to ground out to short as Goines scored. Regan followed with a single to make it 5-4. Hillis grounded to Clay at third to end the uprising.

In the bottom of the inning, Hathcote drew a one-out walk and Morgan singled to left. Clay blooped one to center that had Hathcote caught up between second and third when it dropped in. Dinwiddie, charging in from center, fired to third to get a force.

But Sears beat out an infield hit on a bouncer up the middle to load the bases for Speer, who singled to left to make it 6-4.

Bates struck out the side in the top of the sixth then the Sox added one more. Reliever Zach Gurreiri hit Davis but Acosta, the Benton catcher, threw him out trying to steal.

But then Parker was struck by a 2-2 pitch and Dillon was plunked on a 3-0 delivery.

Logan Bragg relieved and recorded the second out of the inning before walking Morgan and Clay to force in a run.

Jonathan Brock became Benton’s fourth pitcher and he needed just one pitch to get the third out.

Bates did the rest, Goines grounded out to second, Acosta struck out and, after Dinwiddie walked, Gautreaux bounced out to Parker at second to end the game. 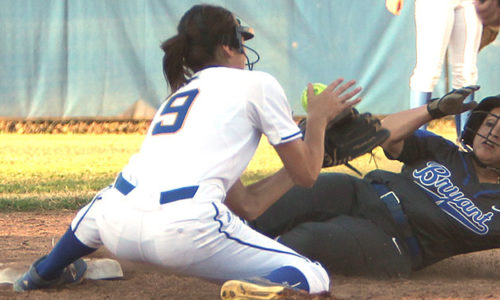 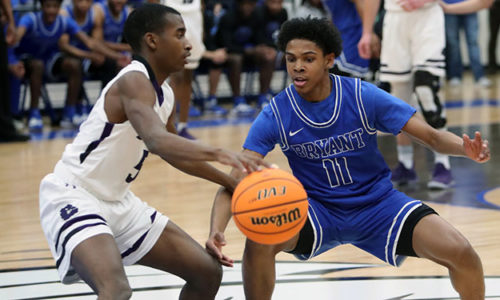