LITTLE ROCK — Sophomore Dezerea Duckworth broke out of a recent scoring slump to fire in[more] 24 points including 18 in the first half for the Bryant Lady Hornets Friday night. But it may have been her defense that proved to be most important in her team’s 52-39 win over the Mount St. Mary Academy Belles at the McCauley Center. 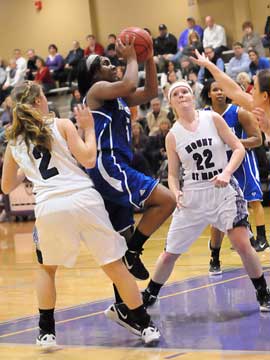 Utilizing a box-and-one defense to try to slow down Mount’s Summer Khairi, Duckworth was assigned the man-to-man defense on the Belles’ senior who scored 24 at Bryant on Jan. 6, in a game that the Lady Hornets eked out in overtime, 56-54. This time, she got just 12.

“Dezerea did a great job, just played a fabulous game, and I thought the rest of our kids did a good job rebounding,” said Lady Hornets coach Brad Matthews. “We were able to get out in transition.”

The Lady Hornets built a 13-6 lead in the first quarter but the margin was just 26-25 at the half. Top scorer Kiara Moore suffered from early foul trouble for Bryant but Duckworth stepped up to take up the slack.

And, with Moore back in the third quarter, Bryant went on a 20-4 run to take control of the game. Logan Davis scored 6 of her 8 points in the second half as did Taneasha Rhode who also grabbed 17 rebounds in the game. 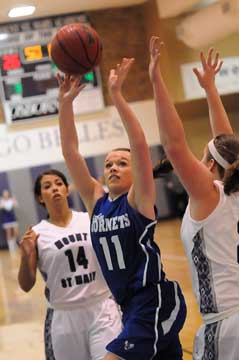 Courtney Davidson and Moore each finished with 6 points. Davidson gathered six boards all in the second half.

“For us to score 20 points in a quarter, we had a lot of those buckets in transition,” Matthews noted. “It was all because of our defense and rebounding. We were able to translate that into some easy opportunities on the other end.”

Duckworth knocked down a pair of 3’s along the way and converted all four of her free throws. She also collected five offensive rebounds.

“Peyton Weaver came in and really gave us some quality minutes when Kiara had to go out early,” the coach added.

The win improved the Lady Hornets to 13-9 overall this season, 5-3 in the 7A/6A-Central Conference, tied for third place. 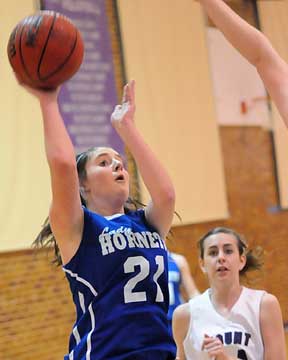 “It was just a great team win,” he stated. “There have been a lot of really good teams that have gone into Mount St. Mary’s and got beat. It’s a tough place to play. And four our kids to go on the road and win, I think that’s just a great win for our kids.

“Hopefully, it’s a sign we’re continuing to improve, continuing to get a little tougher,” Matthews added. “To only allow 14 points (in the second half) on the road in this conference, I think says a lot about our kids. They’re starting to execute game plans.

“We saw that some against Central,” he said, referring to the team’s previous win at home.

“They’re starting to execute and they’re starting to play the scouting report. To hold their best player to 12 points — I thought that was really good. Two of those came on a breakaway layup then four came on offensive rebounds. So, really, in the halfcourt, she scored 6 points. And she’s such a good scorer, does such a great job of getting to the foul line and makes everybody else around her so much better. Not only did Dezerea guard her well but then I thought the other kids we wanted to key on, we did a good job against them too.