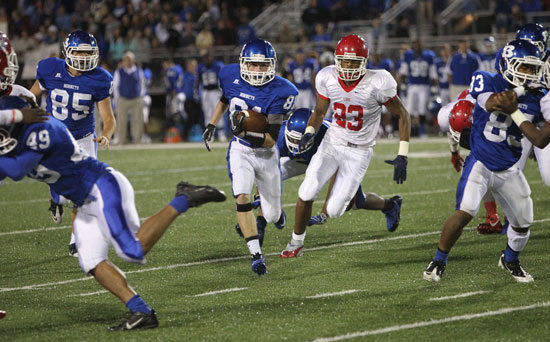 Hornets overwhelm Lions in the first half 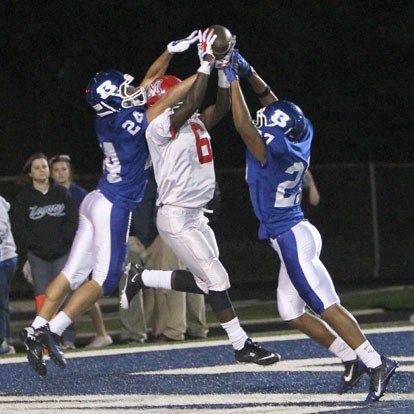 There’s a lot to be said for taking care of business.

For instance, when your football team is playing an opponent it figures to beat handily and they do.

It’s not always a given.

Certainly, the Bryant Hornets thought that was the situation when they opened the season against the Benton Panthers a week ago and that they didn’t take care of business. The teams tied, 14-14.

This week, the Hornets made quick work of the Little Rock McClellan Crimson Lions piling up a 42-0 halftime lead and finishing with a 49-21 victory in which just about everyone that suited up got to play.

Now McClellan, a struggling Class 5A program, is not Benton — the Class 6A Panthers were better than the Hornets probably thought they’d be and a quick look at their schedule indicates they may be 7-0-1 going into a week eight showdown at Lake Hamilton. But, nonetheless, the Hornets were efficient and effective in dismissing the Lions, scoring on their first six possessions and holding McClellan to two first downs and 56 yards of offense in that first half. 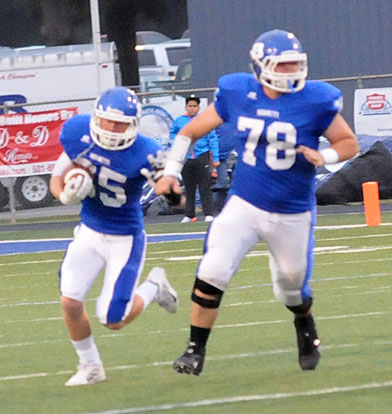 Once a conference rival that actually held a series edge over the Hornets, McClellan was not scheduled for week 2 initially. Bryant was supposed to get a return date with Little Rock Central. But when BHS head coach Paul Calley was making out the schedule, everything was in flux because of the school district’s lawsuit against the Arkansas Activities Association had yet to be resolved. Had Bryant won the case, the Hornets would be back in the South Conference again this year, presumably playing the same schedule as in 2013 with Conway, Central and Catholic their non-conference foes.

The suit was filed to keep Bryant from having to be in a 7A/6A-Central Conference that not only included Conway and Catholic but Russellville, Van Buren, Alma, Greenwood and Siloam Springs.

As it turned out, the ruling went against Bryant so Conway and Catholic became conference games to be schedule in week 4 or later, the Salt Bowl returned to being the season opener since it was no longer a conference game. Calley was left scrambling for a week 2 opponent because, while the jury was out so to speak, Central had contracted with Fort Smith Northside to play in week 2, moving the Bryant-Central contest to week 3. 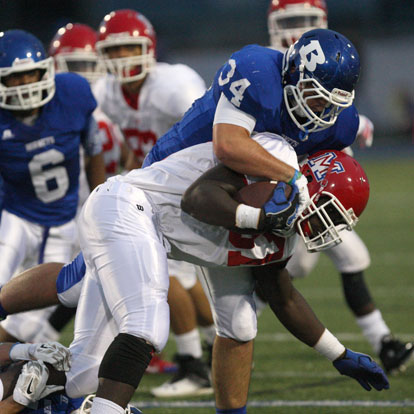 Hayden Knowles (34) makes a tackle for a loss. (Photo by Rick Nation)

McClellan was the only team Calley could find that was looking for a week 2 foe other than some teams in northwest Arkansas. With trips to Siloam and Van Buren on the slate already, the cost of a third long trip made that problematic.

Enter the Lions, trying to build back to the program it was in the 1990’s and early 2000’s under second-year head coach Maurice Moody.

That process continues. The Hornets had them overmatched. Of course, a lopsided win is always great, giving reserves a chance to log some varsity playing time.

In the first half, junior quarterback Gunnar Burks scored twice and tossed a TD pass to senior Quinton Royal, senior running back Kylon Boyle ran for two scores and senior quarterback Brandan Warner picked up 6 points. In the second half, Seth Tucker dashed 30 yards for a seventh TD.

The Hornets amassed 467 yards of offense including 307 on the ground with 10 different backs carrying the ball. Five different quarterbacks completed passes. As a group, they were 13 of 16 for 160 yards. 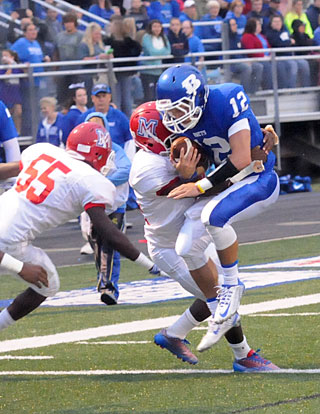 Brandan Warner (12) tries to fight through a tackle. (Photo by Kevin Nagle)

Defensively, so many players got in on tackles that the leading tackler, defensive end Hunter Fugitt led with six including two for losses. All three of Cameron Murray’s stops were for losses. Sophomore Hayden Knowles was in on three tackles and recovered two fumbles. Jordan McDonald and Tanner Austin also recovered fumbles for the Hornets.

On the opening drive, the Hornets cruised 61 yards in six plays, highlighted by Paul Tierney’s 18-yard run on the speed sweep and Warner’s 22 yard pass to Royal. Burks carried in from the 3 for the touchdown.

Jaylon Peterson and Kenneth Buffington had runs of 19 and 11 yards, respectively, as the Lions picked up their first two first downs on the subsequent drive. They got to midfield only to fumble. Knowles recovered.

The Hornets worked on the passing game, which produced just 40 yards against Benton, and Warner completed three consecutive passes to Tierney, Evan Lee and DeAmonte Terry. As a running back, Terry crashed 17 yards to set up Boyle’s 1-yard plunge into the end zone.

Alex Denker added his third extra point to make it 21-0 with 2:52 still to play in the first quarter. 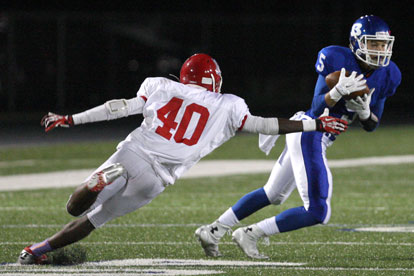 And when McClellan didn’t use enough time on their next series, resulting in another punt, it left Bryant enough time for another TD march. They covered 67 yards in four plays, overcoming a holding penalty along the way. Warner and Lee hooked up for 20 yards to open the series. From the 49, Warner kept on the read option and dashed to his touchdown.

Knowles recovered another fumble on the first play of the second quarter and the Hornets’ offense was in business again. After a pair of procedure penalties, Burks broke a 24-yard run to the 1. Boyle got the 6 from there.

Another Lions punt gave the Hornets their next possession at their own 38. Again, five plays covered the ground. Burks threw a 14-yard pass to Austin Kelly then Sevonte Turner sliced 25 yards to the 17. A play later, Burks threw to Royal for the 9-yard touchdown and it was 42-0 with 6:59 left in the half. 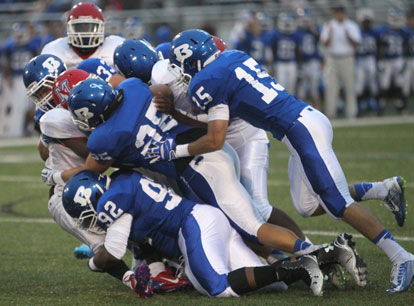 When the half ended, Madison Schrader had moved the Hornets within 12 yards of another touchdown, a drive he highlighted with an 18-yard run and a 23-yard pass to Kelly.

The second half started with McClellan’s Ezekiel Baldwin returing the kickoff 87 yards for a touchdown. On the extra-point attempt, a bad snap forced Pierre Strong, the holder, to make a run for it and he got to the corner in time to make it 42-8.

Moments later, fumble on the handoff of Bryant’s first play of the half was picked up by Travoris Akins who scooped and scored from 30 yards out. Jesus Martinez kicked the extra point and before the Lions had run a single play on offense, they’d put 15 points on the board. 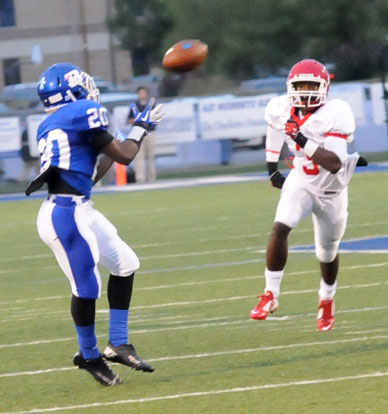 DeAmonte Terry hauls in a pass. (Photo by Kevin Nagle)

Of course, the half started with the sportsmanship or mercy rule in effect. Except for timeouts, the clock ran continuously.

The Hornets were forced to punt for the only time but, three plays into the Lions’ possession, quarterback Dalvion Childs fumbled. McDonald recovered. Behind Terry’s running and a 10-yard pass completion from sophomore Beaux Bonvillain to Landon Smith, the Hornets drove to the Lions’ 34. Bonvillain then hit senior Michael Martindale with a flat pass that the receiver turned into a 31-yard gain. Tucker’s scoring dash followed on the next play as he traipsed the right sideline.

McClellan added a 53-yard touchdown pass in the final five minutes. Childs connected with Buffington on the play. It was the lone pass completion of the night for the Lions.

A try for two resulted in the fumble that Austin covered. A tussle in the end zone resulted in a McClellan player being penalized 15 yards on the kickoff and being ejected from the game.

The kickoff rolled to the 3, however. With 3:43 or so left, Jarret Jacobs took over at quarterback and completed a 13-yard pass to Najee Hunt to get Bryant out of the hole but the McClellan players wrestled the ball away from Hunt at the end of the play.

The Lions took a timeout to try to get another score on the boards but three passes from the 20 fell incomplete. Martinez came in on the last play of the game to try a 36-yard field goal but it was wide of the mark. 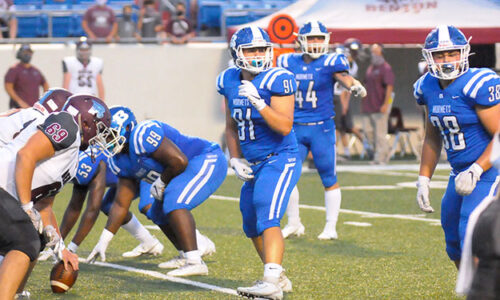