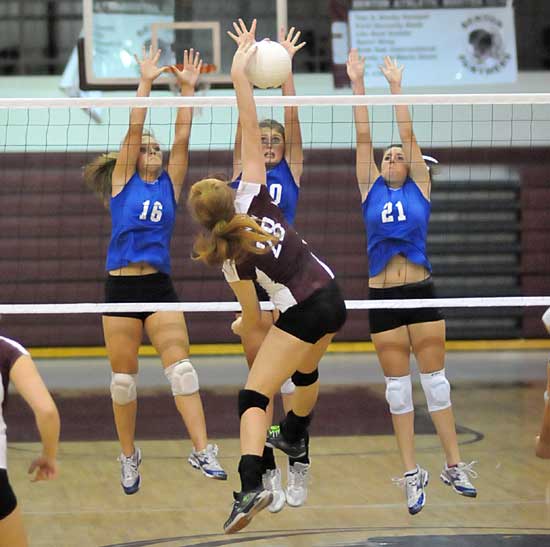 BENTON — If it’d been a regular-season match, the Bryant Lady Hornets would’ve opened the[more] season with a 3-2 win. 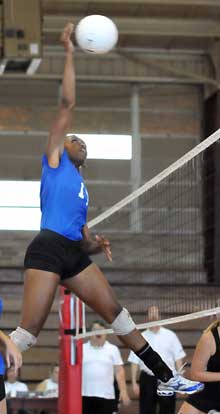 But then that would’ve been against one team and in one gym. Instead, they were competing in a preseason jamboree hosted by the Benton Lady Panthers in which they played one game apiece against five different opponents in two different facilities.

“It’s good to make this the first game but it’s hard when you can’t get that rhythm going,” commented Lady Hornets coach Beth Solomon. “When you switch teams, one game to 25 and you’re switching gyms. It’s kind of hard to get that rhythm.

“But this is to get them kind of going,” she added. “The first game out, it never looks great.”

The Lady Hornets fell behind 0-4 in the very first game against Little Rock Christian and never quite overcame that deficit. In fact, they outscored the Lady Warriors, 22-21, the rest of the game but absorbed a 22-25 loss.

They bounced back with a 25-16 win over 7A/6A-Central Conference rival, Mount St. Mary, pulling away after the game was tied 14-14.

Those games were played in the Benton field house. They then moved to the Benton Arena and, after a brief break while another game concluded, they took on the rival Lady Panthers. Bryant build a 19-12 lead only to have Benton rally for a 24-26 win.

After easing to a 25-19 win over Malvern, the Lady Hornets finished up back in the field house with a 24-20 decision over Little Rock Mills in which a few of the younger players got into the action.

In assessing her team’s overall performance, Solomon stated, “One thing we’ve really got to work on is using our hitters better, choosing the hitters that are on and using them. I don’t feel like we used our middles near enough tonight. A lot of our sets weren’t on, a couple of games our passes weren’t on. We’ve just got to put it all together. And we will.”

The Lady Hornets officially open the season on Thursday, Aug. 25, at Fountain Lake.

“We’re definitely going to start focusing more on our defensive coverage as far as covering the balls that are off,” the coach continued. “We’re pretty good at getting the balls that are hit, actually hit. But, the off-speed balls, the tipped balls, that kind of stuff. Covering our hitters is a big thing right now. And tonight they weren’t very vocal and that’s one thing that we’ve really got to fix but it’ll come together.” 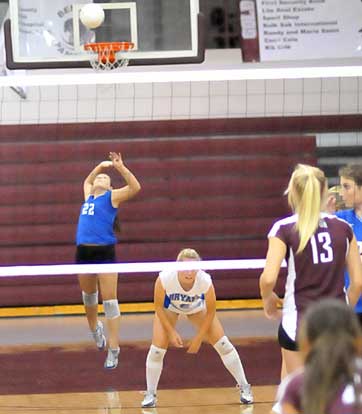 In the opening game, the Lady Hornets got back into the contest behind kills from Brooke Howell and Alyssa Anderson. The lead was trimmed to 6-7 but Little Rock Christian surged to keep the upper hand.

Bryant made a late run as well. Trailing 16-21, they scored on a kill by Peyton Thacker and blocks by Brianna White and McKenzie Rice to make it 21-22. Little Rock Christian broke serve to make it a two-point lead then Anderson’s kill regained control for the Lady Hornets before the Lady Warriors finished it off with the last two points.

In the second game against Mount, the teams took turns putting together runs. The contest was tied at 6 when Bryant pushed out to a 13-8 lead with Howell serving up an ace, McKenzie Rice and Anderson producing kills and White scoring off a tip.

The Belles countered with a run to tie it at 14 but a wide serve cost them control and the Lady Hornets built a 21-15 margin. Britten Hays contributed a kill as did Howell and Anderson. An ace by Anderson helped out as did a scoring block on which White and Hannah Rice combined.

Mount broke serve but couldn’t retain it as Bryant, with Hannah Rice in service, closed out the victory.

And the Lady Hornets took that momentum into the game with Benton. They led most of the way. Benton pulled even at 10 then Bryant scored six unanswered with Lauren Reed serving through much of that surge. She had an ace along the way while Anderson contributed points off a pair of blocks.

Benton eventually tied it at 20. Anderson and Courtney Davidson combined on a block to snap the tie and a wide hit by Benton had the Lady Hornets up 22-20. It was eventually tied at 24 before Benton won on a pair of late kills.

After a break, the Lady Hornets played even with Malvern up to 7-7 then took control of the game. Howell came through with a pair of aces and Thacker combined with Hannah Rice on a scoring block. McKenzie Rice had a kill and the Lady Leopards were in a hole they couldn’t climb out of.

Likewise, though they tied the game at 11, 13 and 14, Mills never could manage a lead after inching ahead 8-7 then 9-8. The Lady Hornets pulled away after it was tied at 14. Howell served up an ace, White scored on a block and McKenzie Rice had a kill.Malvern errors helped Bryant put it away late, though McKenzie Rice contributed an ace along the way.