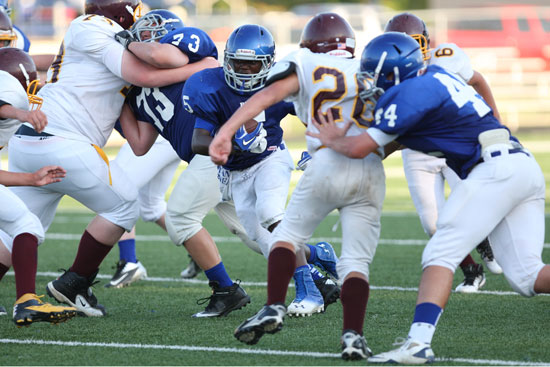 The Bryant White Hornets eighth grade team of Bryant Middle School was inside the red zone three[more] times against the Lake Hamilton Wolves eighth graders at Bryant Stadium Thursday night. Another time, they were at the lip of the red zone (inside the opponents’ 20). 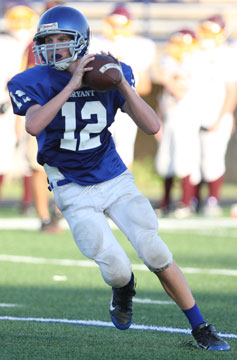 Unfortunately, turnovers and big losses kept them from putting points on the board and, though Lake Hamilton committed three turnovers of its own, the Wolves were able to take advantage of a short field for one score then drove the length of the field after another Bryant White miscue forging a 16-0 win.

Bryant White opened the game with a drive from its own 48 to the Lake Hamilton 22 behind the running of De’Amonte Terry and an 11-yard pass from Beaux Bonvillain to Jake East. But, on a fourth-and-4, Bonvillain had to scramble to cover a bad snap and the Hornets turned the ball over on downs.

Lake Hamilton drove to the Bryant 19 but fumbled. Though Bryant recovered at its own 18, the very next play, a fumbled pitch cost the Hornets possession at 11.

The defense rose up again and, on a second-and-8 at the 9, forced quarterback Andrew Bennett to cough up the ball and Marvin Moody recovered for the Hornets. 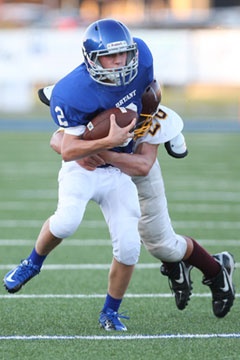 A pair of solid runs by Cameron Coleman had the Hornets out to the 26 but another bad snap resulted in a loss back to the 9 and, after an incomplete halfback pass by Terry, the Hornets were forced to punt.

The resulting kick was downed at the Bryant 32 and, in two plays, Lake Hamilton put up the first points. Noah Rengstorf scooted 17 yards for the touchdown. And when Bennett threw to Dexton Robertson for the conversion, it was 8-0.

Bryant came back with the help of a nice return on the kickoff by East. A 19-yard dash by Terry on a third-and-9 sparked the drive. Austin Despain added a 9-yard run and the Hornets reached the Wolves’ 15. On a third-and-5, Terry broke a run to the goal line but the ball got loose and Lake Hamilton recovered in the end zone for a touchback with just :42 left in the half.

Bryant’s defense created another opportunity early in the third quarter when Landon Smith intercepted a pass at the Lake Hamilton 36. A pair of Terry runs picked up a first down then Bonvillain connected with East again for 13 yards to the 11. Trying for the end zone on the next play, however, Bennett jumped in front of the throw and intercepted at the goal line. 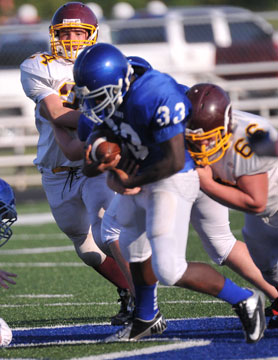 Lake Hamilton then marched 86 yards for a second score. Rengstorf broke a 19-yard run early in the drive then Johnathan Buss added totes for 17 and 10 yards to the Bryant 28. The Hornets’ Garrett Misenheimer combined with Terry to drop Buss for a 4-yard loss and, moments later, an illegal block in the back, pushed the Wolves back to the Bryant 36.

A third-down pass from Bennett to Rengstorf picked up 7 then Rengstorf got behind the secondary on a 29-yard completion on fourth down to make it 14-0. Bennett’s pass to Ramar Freeman set the final score with 6:54 left to play.

Bryant threatened to answer. After another good kickoff return, this time by Despain, Landon Smith, in at quarterback, dashed for 11 yards. Coleman added a 20-yard burst but then a fumble lost 13 stripes.

Smith came back with a 20-yard completion to East and a run by Terry had the Hornets 11 yards away from paydirt. Smith kept to inside the 5 but the gain was nullified by an illegal block. Moments later, Smith tried to go to the end zone only to have Bennett intercept at the 3.

He returned it out to the 29 and the Wolves melted the final 3:13 of the game to sew up the win. 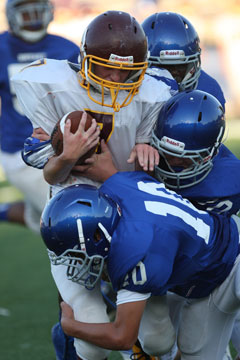 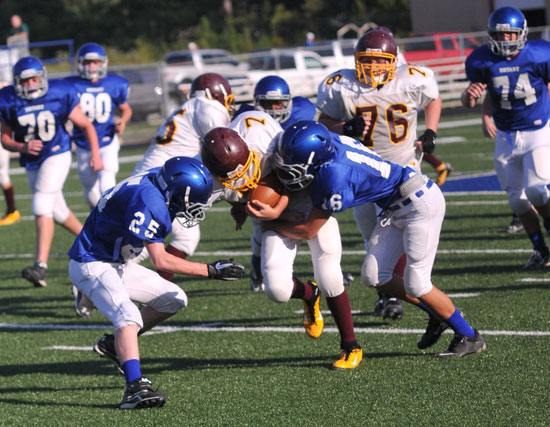