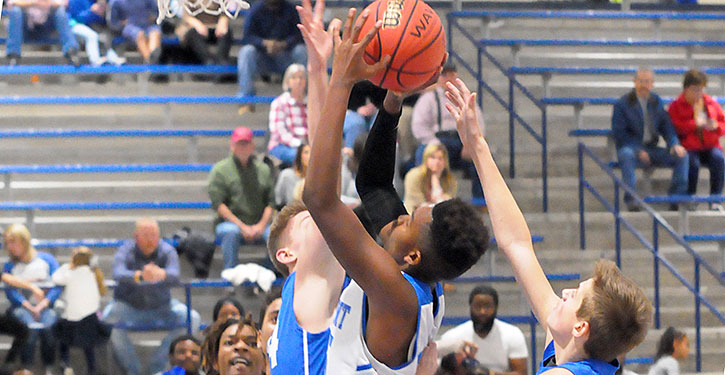 Nichols hit four 3-pointers in the second half including three in the third period to spark Bryant White. He finished with six rebounds and three assists.

“Before the game, I asked our guys to shoot the ball if they were open,” said Bryant White coach Richard Wrightner. “I think we have been a really good defensive team, but I wanted us to have a great game offensively as well. I believe we did just that. We were aggressive on the boards. We took good shots and we shot the ball with confidence.

“Defensively, we gave up a few more shots than we wanted to, but we answered right back,” he added. “Our boys did really well. I am proud of them.”

“I thought we played well at times,” said Bryant Blue coach Steve Wilson. “And we shot the ball well at times. We seemed to give up a lot of points in spurts when they got more aggressive with their press.”

Bryant White held an 8-6 edge at the end of the first quarter. Vinson and Gilmore each had 5 points in the second quarter as the lead grew to 20-15. Billingsley and Skelley each popped a 3.

Going into the fourth quarter, the White lead was 36-26 with Nichols accounting for 13 of hits team’s 16 points. Billingsley hit another 3 and Lamb had 4 points, Thompson 3 in the quarter.