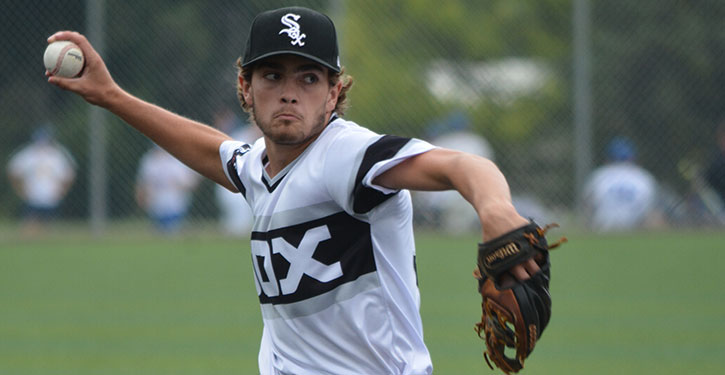 So, when the Senior Black Sox came up against the Senior Pirates in an elimination game at the 2018 Senior Legion State tourney at Hendrix College on Sunday, it figured that Dillon might have their number again.

But, perhaps, the familiarity the Pirates gained last weekend benefitted them. Starting with junior players Blake Chambers and Cole Dawson at the top of the Senior lineup, Russellville put together four hits and a walk to rush to a 2-0 lead.

With the bases loaded and no one out, however, Will McEntire relieved for the Sox, picked off the runner at third and struck out two to escape any further damage. He wound up combining with Boston Heil and Logan Catton in shutting the Pirates out on two hits the rest of the way and Bryant rallied for a 7-2 victory as they lived to play another day.

Russellville never got a base-runner past first the rest of the game.

The Sox will take on the rival Little Rock Vipers at 5 p.m., on Monday in another game of survival. The winner of the game advances to the losers bracket final against Fort Smith Sportman at 8.

Sheridan, which won the winners bracket finals on Sunday night, 1-0, over Fort Smith awaits on Tuesday in the championship round as the last unbeaten team in the tourney. Monday’s survivor will have to beat Sheridan twice to earn the State title and the state’s bid to the MidSouth Regional Tournament in New Orleans next week.

Sunday’s games were delayed by the threat of rain that never really came. So, the game that would pit Bryant and Little Rock, originally scheduled for Sunday night, was moved to Monday while the first game of the championship round was shifted from Monday to Tuesday.

Bryant and Little Rock have split four games this season with the Vipers winning in the championship game of the Zone 3 tournament at Bryant to gain the top seed from the league to State.

But both teams lost in the opening round: Bryant 10-1 to Fort Smith and Little Rock 2-0 to Russellville.

On Sunday, after McEntire’s Houdini act in the bottom of the first, the Sox scored four times in the top of the second to gain the upper hand. They wound up with 10 hits against Pirates’ hurlers Brayden Myers and Carter Thessing.

Logan Chambers, Matthew Sandidge and Scott Schmidt each had two hits. Chambers and Catton each drove in two runs and Sandidge knocked in one.

Schmidt got the second-inning rally going with a one-out single to right. With two down, Sandidge came through with a base hit to left. Coby Greiner followed with a grounder up the middle that Dawson, the shortstop got to behind the second-base bag. But the ball ricocheted off his knee and the bases were loaded for Chambers.

On a 1-2 pitch, Chambers ripped a single to right to drive in two. And when the throw home from right sent Russellville’s catcher, Thessing up the third-base line, Greiner, who had stopped at third, took off for home, just evading a lunging tag by Thessing.

With Chambers taking second on the play, the Sox had a 3-2 lead. Catton lined a single to center of a 3-2 pitch to make it 4-2. It was the fifth two-strike single of the inning for Bryant.

Jake Wright singled then he and Catton tried to work the double-steal. Wright drew a throw as he took second, but Dawson cut in front of the bag and fired back to Thessing at the plate in time for Catton to be tagged out on a bang-bang play that Bryant manager Darren Hurt disputed briefly.

As it was, the Sox had a lead.

McEntire struck out two more in a 1-2-3 second. After the Sox were retired in order in the top of the third, Bryant’s big right-hander set down the first two as he reached 29 pitches. Pulling him before he passed 30 will keep him eligible to pitch again on Monday.

In fact, none of the four Sox pitchers threw more than 30 pitches. Boston Heil, who took over for McEntire, got an out on his 30thpitch in the bottom of the fifth. Catton wound up getting the final out of the game on his 30thpitch.

Heil walked a pair of batters along the way but he didn’t allow a hit.

Catton took in the fifth and got the final out on a sweet back-handed defensive play by Konnor Clontz, who had taken over at second at the pitching change.

The Sox chased Myers out of the game in the top of the fourth when Logan Grant drew a walk, stole second and scored on a Sandidge double.

Thessing came out from behind the plate to take over on the mound for the Pirates. He fanned the first batter he faced but Chambers singled to left on a 3-2 count. He stole second before Catton’s sacrifice fly to right made it 6-2.

Thessing kept the Sox off the board until the seventh when, with one out, Wright walked and stole second. With two down, Grayson Prince came in as a pinch-hitter. His grounder to second drew an errant throw to first and Wright hustled all the way home for the final tally.