SHERIDAN — Over the last two years, the Bryant Hornets had defeated the Sheridan Yellowjackets by a combined 80-21, two losses in a stretch in which the Sheridan program had gone through three coaches and notched one win in 23 games. Bryant fans and players expected another cakewalk when the two teams met at Yellowjackets Stadium on Friday, Sept. 19, a dangerous notion in any circumstance.

Especially when you combine that lack of respect with the fact that the Hornets were still recovering from the emotional, unprecedented 34-34 tie with the arch-rival Benton Panthers, they continue to be ranked among the top 10 teams in the state and their starting lineup was mixed and matched due to injuries.

Add to that the fact that this Yellowjackets team is much better than the two previous teams and no game on their schedule means much more to the them than the one against Bryant, as well as the fact that their new coach is a former Benton Panther — well, it’s a wonder the Hornets escaped with a 24-14 win.

“Our kids have to realize we’re in the front riding the white horse and people are shooting at us,” stated Hornets head coach Paul Calley. “We’ve got to be ready to play every week. There’s no easy games.”

Once again, the Hornets had to adjust on the fly, offensively, and it took awhile to find the right plays to combat Sheridan’s defensive scheme. Like most other teams Bryant plays, the Jackets made major changes to its defense and because of the new coaches there, the Hornets’ staff was left guessing what to prepare for. As usual, they just tried to prepare for everything.

But for all of the above reasons, and perhaps others, the Hornets were unfocused in practice during most of the week prior to the game.

Once the game began, the adjustments in tactics and attitudes took awhile to take.

“I let Coach Floyd signal in plays so I had more time to make adjustments and do the things I used to do, as far as making changes on the sideline, things like that,” Calley related. “It kind of freed me up. We made some adjustments and called some things that ended up helping us. We scored a touchdown on one and had a couple of big gainers on two more. Sheridan had a good scheme against us. We’ve got to do a better job of picking up what the defense is trying to do to us.”

The scoring play was huge, a 53-yard touchdown pass from Scott Peeler to Richie Wood. Wood provided much of the yardage with his run after the catch. The TD snapped a 14-14 tie with 4:20 left in the third quarter.

Wood had already come through in a big way for the Hornets, returning the second half kickoff 82 yards for a touchdown to give his team their first lead at 14-7.

The touchdown came one play after a holding penalty, one of eight called in the game between the two teams. It had negated a 15-yard run by David Lister.

“We still made too many mistakes,” Calley said. “The penalties hurt us. It seems like every time we’d hit a big play, we got it called back. We ran the ball decent and we were balanced. We threw it 24 times and ran it 23 times. A lot of times, we found ourselves in long-yardage situations, though, where we had to throw.

“I thought we were slow with our no-huddle,” he added. “We didn’t get plays called and run as quick as I’d like. In order for us to get more snaps when we’re playing against a ball-control offense, we’ve got to get up there and execute and get our plays in. We only ran 47 plays. We’ve been running 70.”

Sheridan tried to shorten the game, stay close and win it late. And their ground game was impressive against the patchwork Bryant defense. Safety Bryan Griffith had to make a team-high 16 tackles.

The Jackets wound up rushing for 250 yards in the game, led by fullback Kris Persons’ 128 on 20 totes.

Sheridan mustered the only scoring threat in the first quarter, marching from its 37 to the Bryant 2, highlighted by a 41-yard gallop by Persons. But the Bryant defense made a stand and when a fourth-down pass was knocked down in the end zone by cornerback Todd Bryan, the Hornets took over.

The game remained scoreless until late in the half. Sheridan put together a 77-yard drive to paydirt. A third-and-13 pass from Zac Corbitt to Nick Baker picked up 26-yards to get the Jackets in the red zone. Josh Easterly eventually scored from the 2 with 1:54 left in the half.

Buoyed by a good kickoff return by Brandon Butler, the Hornets responded. A 29-yard reception by Blake Zuber reached the 15 but a holding penalty pushed the back, negating a scramble to the 9 by Peeler. But the Bryant quarterback came back on the next play, keeping for 19 yards to the 6. He scored on the next play with :22 left. Bryan kicked the tying extra point.

The momentum stayed with Bryant when Wood shot up the field on the second-half kickoff and the Hornets took the lead.

“That gave us a boost,” Calley noted, “but then we let Sheridan go down and score to tie it up. Anytime we get the momentum, we’ve got to keep it.”

Indeed, the Yellowjackets answered with a 79-yard scoring drive that included just two passes. The big one was a 17-yard connection from Corbitt to Aaron Redd, converting a third-and-12 from the Bryant 28.

Eventually, Easterly scored again, this time from the 1 and the game was tied.

“We’ve just got to play hard,” Calley commented. “That’s the key. If you get all 11 playing hard at the same time, good things are going to happen. If you’ve got a couple of people loafing, it affects the whole scheme.”

Sheridan tried an onside kick to get the ball back and it might’ve worked but the ball was touched by a Jackets player before it had gone the required 10 yards. Bryant took advantage with the go-ahead strike from Peeler to Wood.

And the Bryant defense stepped up at that point, forcing a turnover that gave the Hornets a first down at the Sheridan 16. They were forced to settle for a field goal, however, and it was wide left from 27 yards.

“That was disappointing,” Calley asserted.

In turn, Sheridan began to move it again, reaching its 49. On a third-and-1, Persons appeared to get the first down but a holding penalty negated the play and after Bryan knocked down another pass attempt, Sheridan was forced to punt.

Lister reeled off a 12-yard run and, two plays later, Peeler found Zuber for 31 yards to get Bryant in field goal position. They reached the 23 before stalling but Bryan delivered with a 40-yard field goal with 9:08 to play, putting the Hornets up by 10.

Needing two scores and running out of time, Sheridan couldn’t afford to continue to grind it out. On its two final possessions, the Jackets managed just one first down. The Hornets ran out the final 2:57 to nail down the win.

This week, Bryant gets to finally play a home game. They also open AAAAA-Central Conference play against another longtime rival, the Catholic High Rockets.

“We’re going to have to step it up this week against Catholic,” Calley emphasized. “I think they’re physically better than Sheridan. They’ve got a little more confidence. They’ve beaten us twice in JV, so they believe they can beat us.”

The Rockets are coached by Ellis “Scooter” Register this season. He’s an old Bryant nemesis as coach of the El Dorado Wildcats and, prior to that, the Little Rock McClellan Lions. 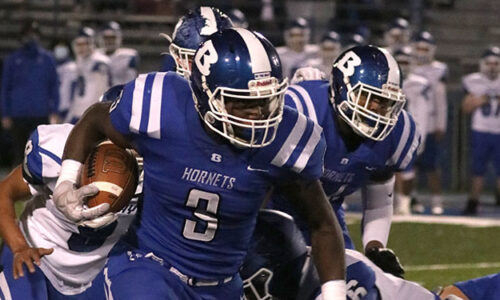