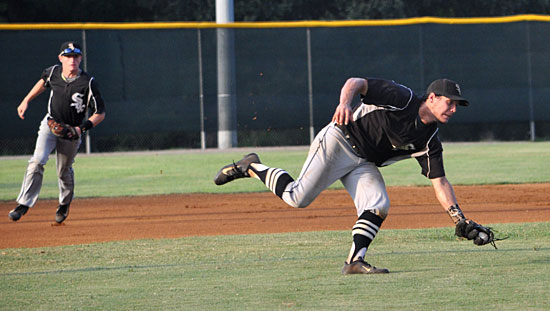 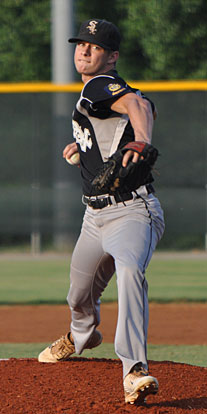 FORT SMITH — Even though the Fort Smith Kerwins Sportsmen rallied for seven runs in the seventh inning to overcome a 4-0 deficit and wound up handing them a 10-4 loss on Monday, the Bryant Black Sox will be playing for the Senior American Legion State championship tonight.

And they may play Kerwins again, though the Sportsmen will have to get past the Texarkana Razorbacks in the 4 o’clock game to get that chance. Bryant (35-7-2) will play the survivor of that contest 20 minutes after its over in a winner-take-all final that will not only decide the State championship but determine the Arkansas representative to the MidSouth Regional Tournament, starting Aug. 6.

For Kerwins, Monday’s game was win or go home — even though the team’s players have been sleeping in their own beds every night of the tourney as the host team. For Bryant, a win would’ve meant that somebody — Texarkana, as it turns out — would have meant they’d had two chances to win the title on Tuesday. Texarkana survived with a 7-3 win to oust Cabot on Monday.

Though the Sox would’ve relished knocking out the Fort Smith team, the security of knowing they were already set for a shot at the title allowed manager Darren Hurt to rest his primary pitchers. Yet, he wound up getting a tremendous start from Trey Breeding, who shut out Kerwins for six innings.

After catching 25 of the Black Sox’ 29 innings over three games in as many hot and humid days at the tourney, Breeding took the mound for just the fifth time this season and befuddled the Sportmen. He didn’t give up a hit until one out into the third inning. After pitching around a two-out double in the fifth, he kept the Fort Smith team off the board in the sixth despite a lead-off triple. 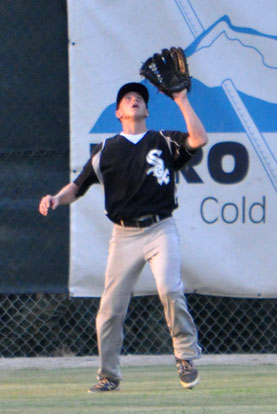 The Sox weren’t exactly knocking around Kerwins’ starter Christian Neves but, as they’ve done so many times this season, they scrapped and battled to build a 4-0 lead. It helped that Neves issued six walks in his 5 2/3 innings.

Bryant got on the board in the third when Logan Allen was hit by a pitch, Seth Tucker sacrificed him to second and Connor Tatum yanked a double to right to chase him home.

In the top of the fifth, Allen crossed the plate again. He walked to lead off the inning and, again, Tucker sacrificed him to second. This time, Tatum pulled a single into right to put runners at the corners. Drew Tipton’s fly to left wasn’t deep enough for Allen to score but, moments later, he raced in on a passed ball as Brandan Warner was drawing a walk.

Neves escaped further damage by getting Blake Patterson to ground out to second.

After Breeding pitched around the double by Mason Edgmon in the bottom of the fifth, the Sox struck for two runs in the sixth.

This time, Breeding drew the lead-off walk, took second on a wild pitch and scored on Jason Hastings’ double to right. Hastings reached third on the late throw to the plate and came home when Dylan Hurt’s grounder to short was booted.

The Sox threatened to get more too. Allen sacrificed Hurt to second and, with two down, Tatum walked. Neves gave way on the mound to Tanner Wiley but Tipton reached on another error at short to load the bases.

Wiley and the Sportsmen escaped, however, when Warner fanned.

In the bottom of the sixth, Jason Hickman cracked the triple into the left-field corner. He held at third as Warner fielded a grounder by Colby Demato, stayed put as Christian Brasher lined out to Hastings in right then was left standing there as Breeding got Will Kiek to bounce out to Warner.

Wiley retired the middle of the Bryant order 1-2-3 in the seventh.

With Breeding tiring, Wiley, Drew Person and Dylan Thurber struck consecutive singles to open the home seventh as Fort Smith dented the plate for the first time. Edgmon was hit by a 3-2 pitch and Breeding gave way to Austin Kelly on the mound.

Kelly got Josh Woolly to hit a grounder to short but, in his haste to try to start a doubleplay, Tipton misplayed the ball. Person scored and the bases remained loaded with the score 4-2.

Kelly struck out Hickman but a four-pitch walk to Demato forced in a run to make it 4-3.

Alex Shurtleff took the mound at that point and, on his first pitch, Brasher cleared the bases with a triple. Kiek’s sacrifice fly on the very next pitch had Kerwins up 7-4. Shurtleff struck out Wiley but the damage had been done.

Wiley struck out the side in the top of the eighth and the Sportmen added three runs in the bottom of the inning. Shurtleff gave way to Beaux Bonvillain with the score 8-4. Singles by Hickman and Demato each drove in a run.

Brasher followed with a grounder to third that Warner turned into an inning-ending doubleplay.

The Sox were again retired in order in the top of the ninth as Fort Smith lived to play another day.