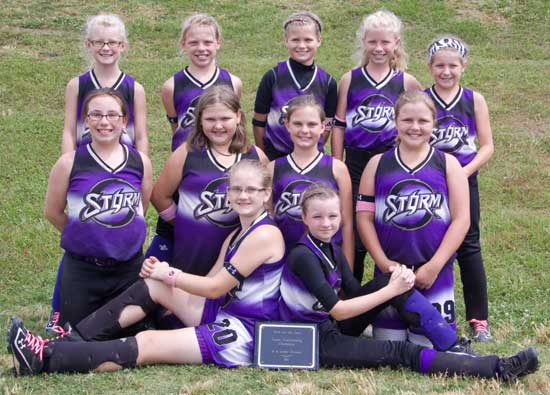 Central Arkansas Storm 10U softball team of Haskell played in the Pitch for the Cure[more] Tournament June 10-12 in the Springdale/Fayetteville area. They won first place in the 10U division for collecting the most donations for the Susan G. Komen Foundation and placed 3rd overall for donations collected. Out of 43 teams in the 10U division, the Storm team finished in 15th place. The team includes, front, Rebekah Thornton and Kaitlyn Farr; second row, Cloie Mitchell, Harleigh McKeehan, Hannah Watts and Taryn Murray and, third row, Kaylee Ryan, Abbigael Davis, Shelby Chavers, Rachel Steele and Molly Pittman. Not pictured are Caitlyn Crain and Aubrie Vocque. The girls are coached by Chad Ryan, Brooks Crain, Trae Pittman and Shane Sheppard. The team extends a very special thank you to all who purchased raffle tickets from the girls.