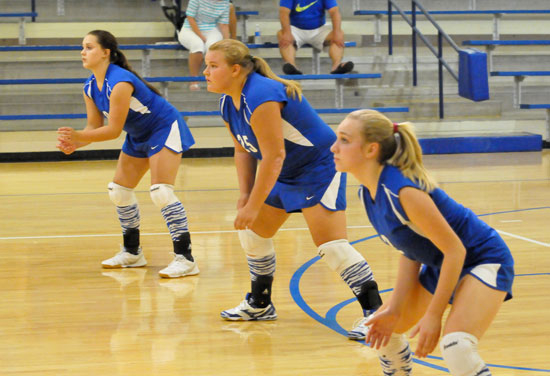 It wasn’t that long ago that the Bryant volleyball program was just a high school activity. In fact, it’s been only within the last 10 years that a freshman then later a middle school program was added.

And it has started to pay off. The Lady Hornets have posted three straight winning seasons for the first time dating back into the 1980’s, including their first conference championship since then last year.

“I think our program looks good for several years to come,” said Bryant High School coach Beth Solomon, who has led her team to those three winning seasons after years and years of losing marks. “Our seventh grade this year, this is one of the first years that we’ve really had a seventh grade group that knows how to move. They don’t just stand still on the court. They actually move a little bit.

“That’s another reason why we wanted to do this, to kind of show, ‘Hey, this is what senior volleyball looks like,’ for these younger ones so they get to see what they’re working towards.”

The Lady Hornets varsity had already won a match at Arkansas Baptist High School and competed in a jamboree at Benton on Thursday. The eighth grade teams from the middle schools had played each other in A and B games on Thursday as well. But it was a tune-up for the freshman team’s opener on Monday against Cabot South.

“I wish we could’ve done this before we started (playing games),” Solomon allowed. “After Thursday night and the first week of school, today was more, for me, the girls still playing the way they know how but having fun. It was more of a fun day.

“I did tell them I didn’t feel like we played as hard today as we should have,” she mentioned. “It was our day to kind of showcase our talents. I don’t feel like we showed that the way we should have. We mixed and matched them. They know they’re playing each other. It was just a day for them to get together and have fun.”

The coach felt it was also good for her team, which is without a senior this season, to see their future teammates on the freshman team.

“You know, our ninth grade group is not bad this year,” she noted. “Seeing that and knowing we’ve got that coming up for next year too was good.”

Freshman coach Julie Long was grateful for the chance to get her team on the floor before the season opener.

“Honestly, the biggest thing was just getting the girls in front of people and letting them get their nerves shaken out a little bit before Monday,” she stated. “Another thing was just kind of seeing what really we need to focus on, what the girls know they can do well and what they’re not very good at. That’s what we just talked about. The biggest thing to get out was, number one, get those nerves out but, number two, just kind of seeing how we’re playing together as a team.”

Asked what she wanted to see improve on Monday night, Long said, “Probably just their movement and they’re communication. Our communication, the first time we played today was not there.”

In assessing her team’s work on Saturday, Bragg said, “I saw a lot of good things today. I think it’s going to be a great season. We’ve got a great group of girls, great parents. It’s very promising.

“The goal was to play together, look at serves,” she said. “The seventh grade has only been practicing for a couple of weeks. Our eighth grade has only had three weeks so it’s always interesting to see when they get out here on a big stage, how they’ll perform.

“I think we came out half asleep today so, hopefully, we’ll have the energy we had Thursday night,” Bragg continued. “They played really well Thursday night when we played Bryant. And that energy wasn’t here (Saturday) and it showed on the court. Hopefully, we can regain that energy that we had for Monday’s game.

“Also, I want them to just stay positive,” she mentioned. “Sometimes things don’t go our way but we’ve got to stay positive throughout.”

Bethel (Bryant Blue) will also play on Monday against Cabot South in an eighth grade game. The seventh grade travels to Conway to play on Tuesday, Aug. 27.

Bryant Middle School (Bryant White) plays next on Tuesday, Sept. 3, at Conway Blue. The seventh grade will be at Conway with Bethel this Tuesday.

Ward liked the improvement she saw in her team since Thursday’s match with Bethel.

“We put in a new system,” she said. “We were a little confused Thursday with our first game so we worked a lot on that (Friday) in practice. It was much better with our rotation today. Everybody knew where they were supposed to be. We didn’t have any hiccups there so I was real pleased with that.

“Our serves are looking fantastic,” she stated. “We’ve got to work on our passing. We’ve got to get better first passes so we can set up something. We’re going to do lots of passing drills this week.

“I was real pleased with our progress, even from Thursday to today,” Ward concluded. “We’ve got a lot of work to do though. But I’m real pleased so far. I think it’s going to be a good season.”