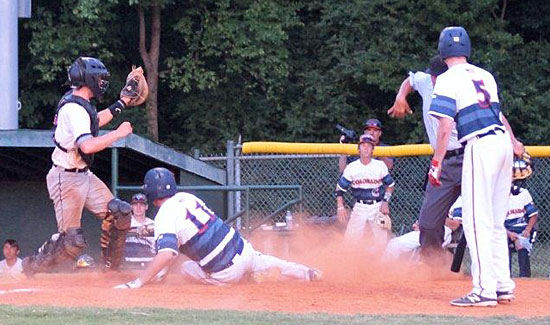 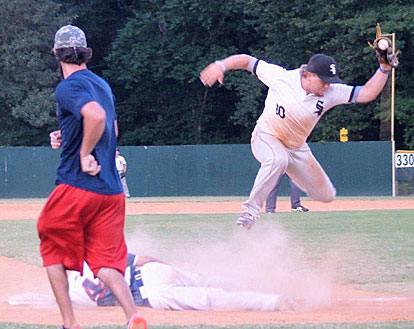 MEMPHIS — Logan Allen scored from second base on a single to right by Garrett Misenheimer as the Bryant Black Sox Senior American Legion team capped off a full day of baseball with a walk-off win, 1-0, in the bottom of the 10th inning on Tuesday.

The game with Team Colorado of Parker, Colo., was an elimination contest in bracket play of the annual Keith Hagan Memorial All-American Classic. And it was the third game of the day for the Sox.

Bryant advanced to the championship round against the Memphis Tigers. The Sox will have to beat them twice on Wednesday to capture the title.

Earlier in the day on Tuesday, the Sox lost to the Tigers 7-0 but came back to oust Batters Box (DeMarini), 5-1. 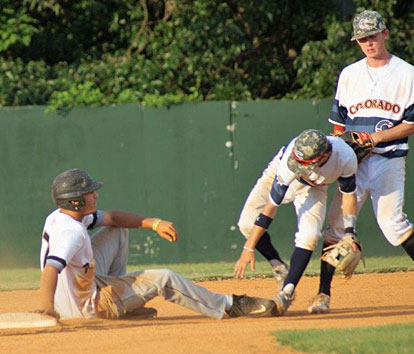 Allen was hit by a delivery from Liam Eddy, the third Colorado pitcher of the game, to lead off the 10th. Jake East legged out a single on a grounder into the hole at short. Eddy tried twice to pick Allen off of second before, on a 2-0 pitch, Misenheimer cracked a liner to right for the game-winning single.

The Sox went through a trio of pitchers as well with Joey Cates, Boston Heil and Seth Tucker combining on the 10-inning shutout, allowing just five hits. Over the first five frames, Cates gave up just one knock but he had to work around seven walks. He fanned four. Heil allowed two hits and a walk with two strikeouts over two frames then Tucker went the last three innings allowing just two hits and fanning a pair.

Cates had to work out of trouble in the very first inning. With one out, he struck Wade Council with a pitch and walked Jordan Stubbings. On a 3-1 pitch to Noah Winkleman, however, Council left early from second trying to steal third. Cates stepped off and threw to third in time for the out. He then came back to strike out Winkleman to get out of the jam. 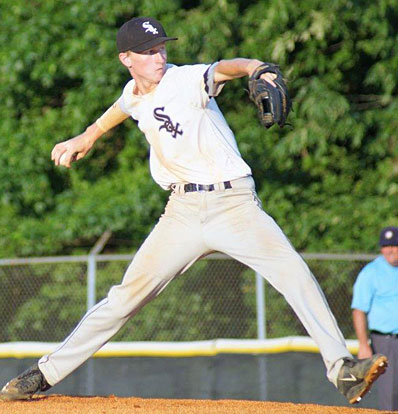 The lone base-runners for the Sox over the first five innings against Jose Treto was a walk to Dylan Hurt in the second, a single by Allen in the fourth and an error that allowed Tucker to reach in the fifth. In the sixth, Treto pitched around a walk to Allen.

In the meantime, Cates pitched around a pair of walks in the third with the help of a doubleplay on a hit-and-run in which Allen charged in from center to grab a line drive then throwing to first before the runner, Zach Bosler, could get back.

Stubbings led off the fourth with a double but was stranded. In the fifth, Bosler and Jimmy Holinger each walked but, with two down, Cates fanned Council to keep it scoreless.

When Cates walked Stubbings to lead off the sixth, Heil was called on to relieve. Winkleman greeted him with a single to right. Dagin Renck, running for Stubbings reached third on the play but, moments later, Heil picked him off third.

With two down, Toby Scoles beat out an infield hit. Winkleman reached third. On a 1-1 pitch to Tyler Gayle, Heil threw over the first and Scoles took off for second. Winkleman broke for the plate but Aaron Orender, at first, took the throw from Heil and fired to Hurt at the plate in time for the out to end the inning in dramatic fashion. 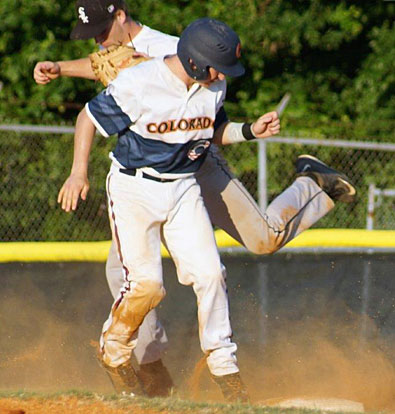 The game went to the bottom of the seventh. Treto walked Misenheimer. After Jeffrey Hastings came on to run for him, Hurt drew a free pass as well. Tommy Drury was called on to pitch in relief at that point. Orender made a bid for a hit but his grounder to flagged down by Holinger. His only play was at third and he got the ball there in time for the force on Hastings.

But a wild pitch moved Hurt to third with the potential winning run. Orender followed up to second. Colorado intentionally walked Tucker to set up a force at every base. Beaux Bonvillain entered the game as a courtesy runner for Tucker as Austin Kelly came on to pinch hit for Cates. Kelly hit a humpback liner that was caught by the second baseman Corbin Geisendorff who quickly threw to first in time for a doubleplay to end the inning and send it to extras.

With Tucker on the mound, Council singled to center but Stubbings struck out, Winkleman popped to short and Justin Olsen struck out to keep it deadlocked. 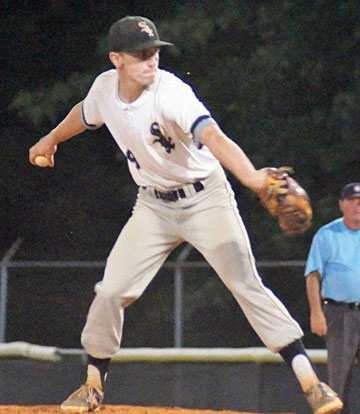 In Bryant’s eighth, Sandidge drew a lead-off walk and Hunter Oglesby sacrificed him to second. With two down, East worked a free pass but Drury escaped with a strikeout.

Tucker worked around a hit batsman in the top of the ninth and, again, the Sox threatened to win it in a walk off in the home half. Hurt led off with a base hit off the glove of Holinger at short, who came up short on a diving attempt. Orender grounded a single to right and, when the ball was bobbled in right, they moved up to second and third.

So, again, the Sox had the winning run at third but, once again, they were denied. Eddy relieved and issued an intentional walk to Tucker to load the bags with no one out. But he fanned the next three, the first two on borderline called third strikes.

Thus, the 10th inning commenced. Council managed a one-out single for Colorado but Tucker retired the side, leaving him standing at first, and setting up the dramatic game-winning uprising.