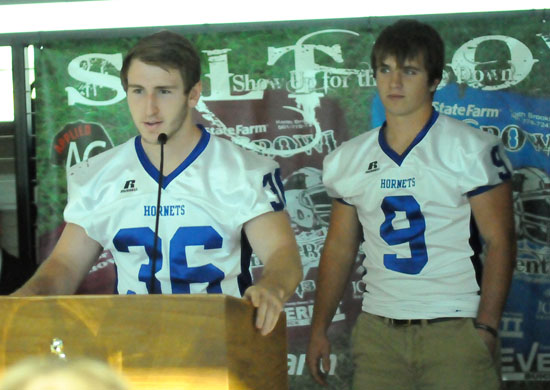 LITTLE ROCK — Bryant seniors Austin May and Wesley Akers joined head football coach Paul Calley, Benton head coach Scott Neathery and players Tarik Beaugard and Jessie Benton at the annual press conference marking the start of Salt Bowl week at the two schools on Monday in the press box at War Memorial Stadium. Former State Speaker of the House of Representatives Shane Broadway emceed the event, which promotes the annual Saline County showdown, which is this Friday, Sept. 27, at 7:30 p.m. 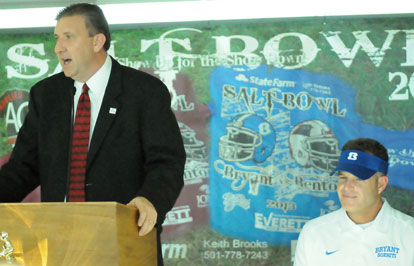 Everyone was careful not to create any bulletin board fodder for the opposition. Most of the talk was about the experience of the Salt Bowl.

“There’s nothing like it in the state of Arkansas,” stated Calley. “I’m thankful that I’m allowed to be a part of it, thankful for what all our sponsors do for us and what they do for the community and how they’re able to help us give back.

“The game itself and the preparation for it becomes pretty hectic,” he added. “There’s a lot of expectations on both sides. But the anticipation leading up to it and all the things that surround this event, it’s almost like a fair atmosphere. It brings both communities together allows us to help others then, of course, compete on the field.

“It’s not always about winning and losing,” Calley said. “That’s not what it’s always about and we’ve got to keep that in mind. Even though winning sure feels a lot better, of course.”

May said, “The Salt Bowl is one of the biggest events during the football season I know. I’ve always attended, even when I was a little kid. Everything goes into it, the preparation. I know, from week one, we have Benton circled on our calendar. 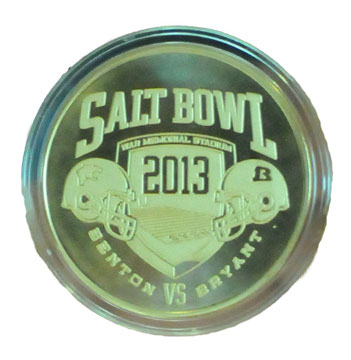 A special coin will be used for the pre-game toss at this Friday’s Bryant-Benton game at War Memorial Stadium. (Photo by Kevin Nagle)

“It’s really good to come out and show our community and everybody on the football team, how we all work together,” he continued. “Our community really supports us and it’s good to see all of them come out. I know a lot of Arkansas football teams don’t get a chance to play in front of 30,000 people, so it’s really big. I know I’ve been looking forward to it since summer practice.”

“To piggyback off what May said, it is a very big deal for our community and us as a team,” Akers said. “Personally, it’s a big deal because I played with Tarik and Jessie in peewee, from first grade through sixth grade. It’s a big deal to go out there and play against them and, hopefully, win. No matter what, though, we’re still going to be cool.

“It’s going to be a good game and I’m just thankful to be able to play in it,” he concluded.

“Everything leading into this week is totally different than any other ballgame,” Neathery told the assembled media. “I do feel like we’re extremely fortunate to be a part of this. I know when I was playing high school football, it would’ve been great to play in an atmosphere like the Salt Bowl. It’s a big deal.

“I’ve got a lot of younger guys that are starting, that are playing a bunch, a lot of sophomores,” he related. “I had my older guys talk to them about the atmosphere, about how you can’t hear yourself think. It really is a bowl game atmosphere. And it’s a big deal for these guys.

“We feel fortunate and we appreciate everybody that works a lot of tireless hours to put this thing on.”

Beaugard spoke next, saying, “Like everybody’s been saying, this is a real big deal for us. I’ve been waiting for this for the longest, probably since we’ve been playing together (referring to Akers). We used to talk about it all the time. Now that it’s finally here and it’s my last one, I know we, the seniors, want to go out with a bang.

“We always think about the Salt Bowl, the Salt Bowl, can’t wait for the Salt Bowl,” he added. “Already this week, school has been crazy about it. It’s a real fun think. I’m just ready to get there, ready for the rest of these days to go through and for it to be Friday so we can play them.”

Benton said, “Like everyone said, we all think about the Salt Bowl. At the beginning of the year, it’s hard to focus on your games. You have to mentally prepare for your other games even though you’re still wanting to think about that one.

“It’s a big deal and we are all excited,” he continued. “Like coach said, we’ve got a lot of younger people that haven’t been out there in the atmosphere but it’s a great atmosphere. I like it more, just being surrounded by more people. I think it’s a great feeling.”

Advanced tickets and t-shirts for the event are currently on sale at Big Red Stores.

The schools both hosted blood drives earlier this month and are about to conclude the annual peanut butter drive in conjunction with the Arkansas Rice Depot.

At the game, a Text to Give program will be active for donations to the American Cancer Society’s annual Relay for Life of Saline County.

On Friday, pep rallies at both schools will be broadcast on Little Rock morning television shows. At 5 p.m., the banks and credit unions of Saline County will once again host “Arkansas’ Largest High School Tailgate Party.” Hot dogs and game programs will be given away and local business booths will be set up on the East side of the stadium.

Gates open at 5:30 with pre-game activities commencing at 7 including the Text to Give. Peewee football teams and cheer groups will be introduced.

At halftime, Chick-Fil-A will host a field goal kick for a year’s supply of chicken. Sign-ups are under way at the Bryant location of the restaurant.

In addition, Everett Buick GMC will host the football toss for a truck. Three people will be given one minute to throw a football into the bed of a truck from 20 yards at the left hash, the middle of the field and the right hash. Sign-ups for the drawing for contestants will be at the tailgate party. Names will be drawn between the first and second quarters.

“We’re looking forward to a great Friday night and another great crowd,” Broadway stated. “By golly, one of these days, we’re going to get 30,000 people.”