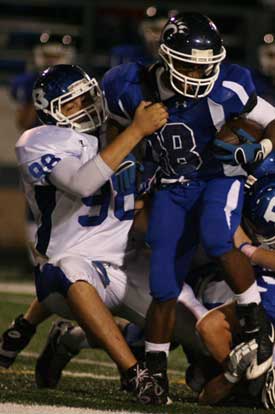 The defensive coaches for the Bryant Hornets, Brad Stroud, Steve Griffith and John Wells, were reviewing video of the team’s scrimmage against Pine Bluff a couple of days after the fact. The players had not yet arrived at the fieldhouse.

A play came up and one of the coaches ran it back a second time.

The play unfolded. It was pass by Pine Bluff with a slight rollout by the quarterback who pulled up and was buried. First by Bryant defensive end James Kidd and tackle Josh Hampton. The other Bryant tackle, Matt Jones, wasn’t far behind.

It was a sack. Great play, everyone agreed.

“You know who made the best play, don’t you?” one of the coaches asked as if he knew and his fellow coaches knew too. 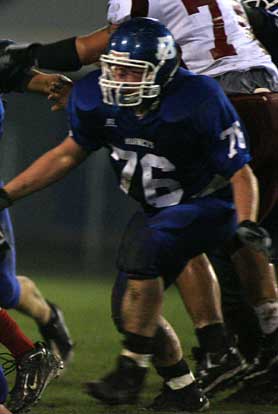 The coach ran it back again. There was No. 52, the other end, Ben Seale. As the quarterback started to roll to his left, Seale took on one blocker then another. He fought them off and stayed level with the line of scrimmage, shuffling outside a bit.

The coach re-ran it one more time for a visitor to see. Sure enough, the quarterback’s rollout was stopped short, leaving him vulnerable to the backside surge from Kidd and Hampton.

Frantically, the quarterback pulled up and looked downfield just as the defenders arrived.

There would be no number on the tackle charts for Seale. No assist. But his coaches sure were pleased.

Assignment defense, solid technique, team play — they’ve been key ingredients to the success that Bryant defenses have had over the years since the program’s turnaround in 1999. They figure to be hallmarks once again this season.

The quartet that was featured in that play — Seale, Hampton, Jones and Kidd, all seniors — are under the tutelage of Griffith, the defensive coordinator, in general and Stroud, the d-line coach, in particular.

“They’re coming along,” Stroud said. “It’s going to be a good group.”

Hampton (6-2, 255) is the star. A three-year starter and an All-State selection as a junior, he has already been getting college scholarship offers. Ouachita Baptist University wants him to continue the pipeline that has developed between Bryant and Arkadelphia. Others have been in touch as well.

“He’s our bell cow,” Stroud acknowledged. “He’s got a lot of want-to. When you put speed and quickness and size together, you’ve got something. He’s difficult to block. They have trouble with him here in practice.” 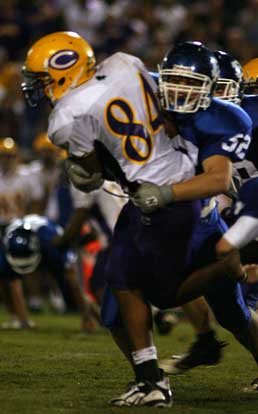 Splitting time between offense at tight end and defense last season, Hampton was in on 51 tackles but, just as importantly, generally forced opponents into a double-team situation that opened up opportunities for the rest of the front seven.

“Matt Jones (5-9, 215) kind of started out slow,” Stroud continued. “He’s coming on. He’s the one technique. He’ll share that position with Cortez Williams (5-7, 232) who’s a sophomore but he’s got what it takes. He’s just a little inexperienced.

“James (Kidd, 5-10, 225) is going to be the five technique,” the coach said.“A couple of these pre-conference games are going to be like the Shiloh Christian kind of game (a 34-14 win in 2002 against the run-and-gun Saints), where it turns into a track meet.”Stroud noted that Cody Perlson (5-7, 165) will be a situational sub at the five technique in that kind of game.

“When some of those guys get winded, I want to just have a revolving door and just keep fresh troops out there,” Stroud added. “I’m hoping Austin Dunahoo and Michael Smith can help us there. I may also move what I’ve got around a little bit.”

“When James wants to, he can destroy a play,” the coach added. “He’s just raw on technique, a work in progress. Ben knows what to do, it’s just reaction time to do it.

“We’re not fast up front like we’ve been in the past,” Stroud summarized. “James can be. And we could be pretty good. We just don’t know yet.”