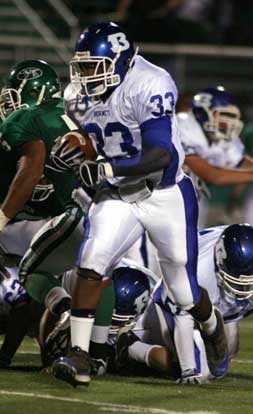 From the outside looking in, the biggest job the Bryant Hornets had to do on offense going into the 2010 season, was to find some way to replace the production of all-time leading rusher Chris Rycraw.

But going into their first game week, the Hornets feel pretty good about their situation at running back. There may not be another Rycraw — but you never know — yet the team is deep at the position with junior Karon Dismuke (5-10, 170), sophomore Jalen Bell (5-7, 151) and senior move-in Stephen Clark (5-10, 200).

In turn, quarterback figured to be set with senior Blake Davidson (6-0, 165), who quarterbacked the Hornets in their stunningly-lopsided win over unbeaten Cabot last season when starter Jimi Easterling was hurt, figured to be step in without a hitch.

But Davidson has been sidelined for much of the pre-season with a sore shoulder. So most of the work had gone to sophomore Hayden Lessenberry (5-11, 185) who has impressed his coaches.[more] 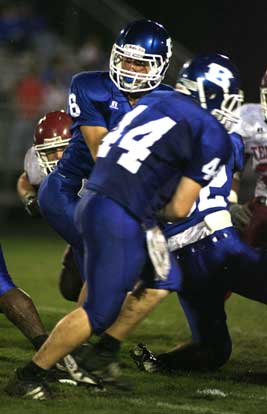 “Hayden Lessenberry is the front-runner to start in the Salt Bowl,” declared Dale Jones, who coaches the quarterbacks and running backs for the Hornets. “Right now, the back-up is (sophomore) Austin Powell (5-10, 150). We’ve played Karon at quarterback a little bit. We’ve got a couple of sets we like to use him.

“The problem we have right now is with Blake,” he continued. “He’s had several setbacks with the tendonitis in his shoulder. He had an MRI this week and the results were pretty positive as far as the outlook. We held him out of throwing again and probably won’t throw again until Monday (Aug. 30). As he goes through the week will determine whether we just go with Lessenberry or we go with both of them. If Blake looks good and he’s ready — he is a senior, he’s been in the system for a long time so if he’s ready to go we may play both of them Friday night.

“It’s been tough for Blake,” the coach acknowledged. “He’s missed out on a lot of reps and he’s rusty right now and his arm’s hurting him.

“But it’s been a blessing for Hayden because he’s had so many reps, opportunities to see live offense and live defense, make the reads in a live game situation — stuff a sophomore doesn’t normally get.

“His mechanics aren’t always great,” Jones mentioned. “You have to stay on him about his mechanics. He’ll get lazy with his feet, lazy with his arm, doesn’t stay on top of the ball. But when he’s on and he’s going good, man, he can play. He can throw the football. And the other thing is, he’s doing more with his feet than, honestly, any of the offensive staff thought he was capable of.”

The coach added that mobility from the quarterback is being worked into the offense.

“We’re going to move all the quarterbacks around a little more,” he said. “We’re real impressed with all of them right now. Austin Powell played good the other night against Pine Bluff. We’re excited about him. If, somewhere down the line, Blake or Hayden gets hurt, we’ve got to have a viable back-up so we’re looking at Austin.

Regarding the running backs, Jones said, “After watching (the video of) the Pine Bluff scrimmage, we looked really good running the ball. We have some security issues with some of our younger guys — ball security — but the biggest thing we have to work on right now with our running backs is pass protection. We had some missed assignments with pass protection. Pine Bluff had some big old guys too that we missed. That’s the biggest thing right now, trying to pick up pass protection with our fullback, with our tailback, making sure we’re going to the right spot and picking up the right guys, making the right step to pick up those guys.

“It’s a lot deeper group,” he acknowledged. “We’re not necessarily deeper at fullback but we do have a lot of running backs. We’ve got two really young guys then we’ve got some experienced guys.

“Stephen is one that transferred in, Karon has been in the program for two years now, so we feel good about him,” explained Jones. “Little Jalen, he’s just a sophomore but, man, he does some amazing things with the ball. You hate to compare a kid to Rycraw but, from a zone perspective, he makes the same cuts as Chris made. He has a vision for when to cut. He’s usually good about making one, quick decision and going with it. He doesn’t do a lot of bouncing.

“Karon is pretty good about zone running and man-on-man,” he continued. “He doesn’t mind sticking his nose in there. He can get elusive and make a guy miss. When he’s running the ball, there is a gear — you don’t see it all the time — but when he made the long touchdown run the other night (against Pine Bluff), he had another gear when he saw that open hole. He made a run against our defense the other day in practice, about a 30, 40 yard run and right when he got in the clear, he had another gear to make sure he got out of there. We’re just tickled with him.

“Stephen — we haven’t had him a whole lot (Clark is also working in the secondary) but when we’ve had him, he never seems to lose yards. He always seems to fall forward, finish it forward, get an extra two or three yards. So we like him from a power perspective.”

Senior Marcus Harris (5-10, 205) returns at fullback. A devastating lead blocker, Harris only rushed the ball two times last year for 11 yards. He also caught a couple of passes for 10 yards. Jones said he figures to be involved more in the passing game this season.

Senior John Reed (5-10, 200) has also proven to be a tough blocker and figures to see playing time when Harris is helping out as a back-up middle linebacker.

Senior Dylan Pritchett (5-8, 195) has been sidelined by a shoulder injury this fall and was held out of the scrimmage against Pine Bluff, but Jones said he too can catch the ball and has a quick first step that makes him a serious threat on the dive. 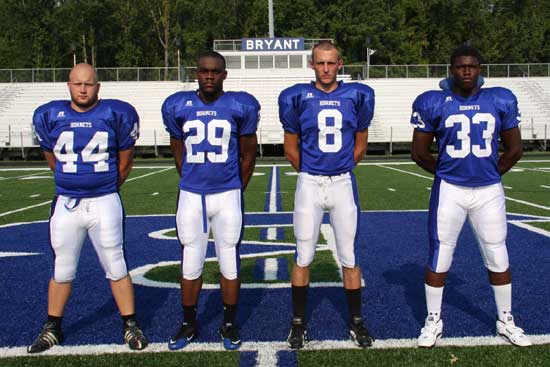