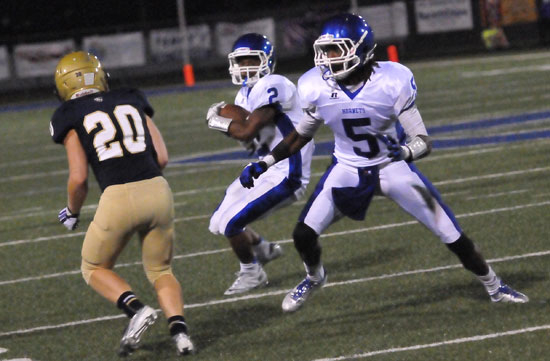 Just about any other year, Bryant Hornets’ wide receiver Brushawn Hunter’s sophomore season in 2012 would’ve been recognized more readily as nothing short of splendid.

Hunter caught 44 passes for 720 yards (over 16 yards per catch) and six touchdowns while rushing for 90 yards in just 16 tries (5.6 yards per try). His 71-yard TD reception was one of the highlights of Bryant’s Salt Bowl win over Benton. He also grabbed a clutch 41-yard shot in the fourth quarter to tie the Hornets’ game at Pine Bluff. Against El Dorado, he caught 11 balls for 158 yards and two scores. 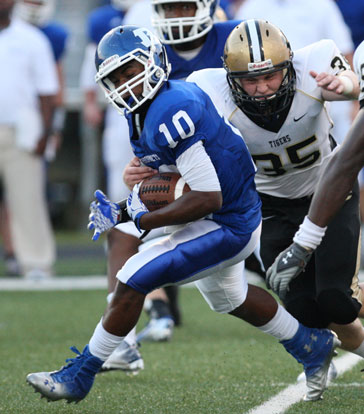 Despite all that, Hunter was overshadowed somewhat by classmate K.J. Hill whose numbers were only slightly better. Hill has since moved to North Little Rock so now Hunter’s the man, a big-play receiver who will be only made more dangerous by an improved running game this season and the ascension of junior Brandan Warner to starting quarterback. Warner and Hunter were a formidable combo on an undefeated freshman team two years ago. Hunter led the team with 112 points, scoring every which way. He caught 19 passes for 469 yards and nine touchdowns, rushed for 557 yards on just 34 carries and scored seven more TDs. He returned a kickoff as well as a punt for touchdowns.

Hunter’s running mate will be senior Devonte Howard who moved to receiver last season after playing quarterback as a sophomore. Howard was third on the team with 26 receptions for 331 yards and three touchdowns including a 58-yard scoring grab against Little Rock Central. In the Hornets’ preseason scrimmage, he turned a 10-yard completion into a 62-yard touchdown against defending Class 7A State champion Fayetteville.

“Those are our two top guys,” acknowledged Bryant offensive coordinator Lance Parker, who serves as the receivers coach. “They provided the bulk of the offense last year besides K.J.

“(Seniors) Austin Vail and Darian Jarrett were not starters last year but they’re going to step up and be starters this year,” he added. “They’ve really matured and they know what I want done and they know how to do it. They come to work everyday and they’re a lot of fun to coach.

“We’re not really, really big but they all know how to run routes, know where to be,” Parker related. “They know what we’re trying to do and that’s half the battle. I think we block well. It’s not just running and catching. It’s knowing where to expect the ball, where you need to sit down, when you need to speed up, how you need to set guys up for whatever concept we’re doing. They listen very well and they’ve taken to the scheme.”

Looking ahead, Parker said, “The 10th grade group has a couple of guys that probably aren’t ready for Friday night but I can see blossoming into good players. There’s Gunnar Burks. There’s Evan Lee. They’ve got potential. There’s Quentin Royal. All those guys, it’s going to be good for them to sit and watch the guys in front of them. They can learn and when it’s their time to play, they’ll be that much better.”