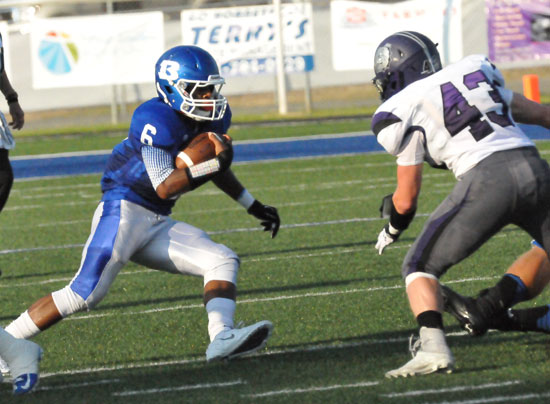 It could be said that, in 2012, the Bryant Hornets running game never quite got off the, um, ground.

Head coach Paul Calley used a lot of different backs to get the 1,067 yards the team managed, less than a third of the total offense for the season. As it turned out, a wide receiver (K.J. Hill) wound up leading the team with 235 yards. Jalen Bell, the starter at the beginning of the season struggled with injury most of the campaign and finished with 224 yards. Third was quarterback Hayden Lessenberry who netted 180 yards after sacks were subtracted.

“Last year,” acknowledged Bryant running backs coach Dondra Harris, “not to say we were one dimensional but we were pass heavy. This year, it’s going to be harder to stop us because we can run and pass. The running backs’ role will be a little bit bigger than it was last year. We’ll run the ball a little more.”

A three-year starter, Lessenberry threw far more passes in 2012 than he had in 2011 or 2010. Of course, as a senior last year, he was able to carry that load pretty well but a good running game forced the other team’s defense to play it honest, cutting down on the aggressiveness of the pass rushers, requiring linebackers to delay their drops however briefly, and making the secondary take a look before rolling into coverage particularly on play-action — a look that can be the difference in an incompletion and a completion, in a short game and a big gain.

The reason the running game will be a bigger factor for the Bryant offense in 2012 is not only talent at the position but more of it.

“We’re developing some depth,” Harris said. “We’ve got four guys that can roll in there and run the ball pretty well.”

Brenden Young (6-0, 180) is a junior who combines size and speed. A former linebacker, he ran on the sprint relay team for the BHS track team this spring. Senior move-in Jarron Wade is the power back at 5-9, 220. His nickname, appropriately enough, is Tank. Junior Kylon Boyle (5-11, 175) is a slasher who, along with Young, got a little varsity playing time last season and showed promise. And sophomore Sevante Turner (5-9, 150) has shown speed and illusiveness.

“Brenden has been getting most of the reps with the ‘ones,’” Harris related. “He played defense last year then moved to running back late — maybe Texarkana week or so.”

Young was also slowed by injury last season between his time on defense and his move to offense.

“Brenden is a great kid, a yes-sir, no-sir guy,” the coach mentioned. “He’s a hard worker always asking what he can do to get better. He idolizes people like Adrian Peterson (All-Pro running back for the Minnesota Vikings). He texted me the other night and told me, ‘Whenever I’m slacking, just say A.P. or Trent Richardson (Cleveland Browns, Alabama Crimson Tide) and I’ll get back on track.’

“Jarron and Kylon are fighting for the number two spot and Sevante has turned it on,” the coach continued. “He’s come on lately. About two weeks ago, he really turned it on, opened some eyes.

“All of these guys are hard workers,” Harris concluded. “I had to push them a little bit early but now that they know what I expect, they go hard.”

Young ran it nine times in varsity play last season, picking up 73 yards and a touchdown. That’s over eight yards a carry. As a freshman, Turner led the Junior Hornets with 775 yards and five touchdowns on 111 carries.