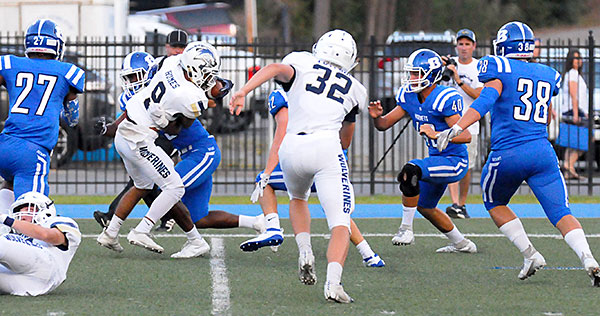 Repetitions — reps in coach speak — are what spring football and summer workouts in team camps and 7-on-7 competitions are all about. They present defensive players with a chance to recognize what’s coming at them, what to look for, how to react and, most importantly perhaps, learning to do all of that quickly, instinctively.

Due to the shutdown for the COVID-19 virus instituted by the state, which cost spring practice and summer camps, the Bryant Hornets are behind in all that.

Of course, so is everybody else.

But few teams have had defenses as tough as Bryant over the last two seasons. Both of the Hornets’ 7A State championship runs included some big-time defensive play, including contributions by some of the guys that are returning.

But it figures to take a while before those guys return to the form they showed last season, and for some of the other guys to develop and step up to fill the holes left by graduation.

“I’ve been very, very fortunate the last couple of years to have probably the most talented position group,” said Hornets linebacker coach Travis Queck. “You take for granted some things.

“We’ve got a very young group, not necessarily age-wise but experience-wise so, for the guys who needed a lot of reps this summer — and we didn’t get it — we’re playing catch-up,” he acknowledged.

Queck welcomes back Hart Penfield and Koby Melton, two seniors who played a lot last year and have been stars on special teams. Junior Gavin Burton played some as a sophomore too.

That was one of the big advantages of the Hornets’ domination last year, building leads time and time again that resulted in the mercy rule going into effect often by halftime. The Hornets were able to go deep into their bench to gain experience for their younger players.

Still, there’s rust to knock off.

“We’ve got a good mentality about us,” Queck said. “They’re not afraid. They’re not shying away from working or shying away from learning. You just take some blows at times early on. But these guys are very capable of being as talented as any group we’ve had once they come together and start putting everything together.”

Penfield, Melton and Burton figure as starters. And when the Hornets got to a three-front Jamarien Bracey, a move-in from Rison, will jump in as the fourth linebacker.

That quartet will be backed by senior Conner Coleman, junior Cameron Booth, sophomores John Ede and Jaylon Brown with senior Myles Aldridge. Senior Demetrius Weston will also get some time at Mike, joining Burton and Ede.

The most experienced grouping on defense is in the secondary, which is anchored by returning starter Austin Schroeder at safety and cornerback Kyle Knox. Twin brother Kaleb Knox played a lot last season. He’ll get the starting nod at the other safety. LaQuav Brumfield will be at the other corner. He also got playing time in 2019.

“Kyle started the whole year,” said Hornets secondary coach and defensive coordinator Quad Sanders. “LaQuav was kind of new to football. It was really his first year getting back into the groove. But he did really good so he’s going to start for us.

Brumfield played in junior high then sat out his sophomore year and was a stalwart on the BHS swim team.

“Schroeder was a starter all year for us last year,” said Sanders. “Kaleb kind of filled in a role where needed. We worked him late at some linebacker last year leading up to the State championship game. He’s learned the defense a lot more so he’s really comfortable back there.”

“Backing those corners up is kind of going to be a whole slew of guys that we can pick from,” Sanders continued. “Starting with Jalun Davis. He’s probably my first option right now at either side.

“Then we’ve got Jaden Newburn and Remulus Herrien — guys that I feel like can get the job done if something were to happen where we lost two corners,” the coach added.

All of those guys are seniors along with Noah Davis at safety.

“Jacknife,” the coach said, referring to Davis’ nickname. “Tremendous ball player, middle of the field guy. He’s a baseball player. He can track it like no other.”

“Then I have a sophomore in Ethan Primus who’s been showing some promise,” Sanders said. “He’s going to be another guy that I can kind of lean on.

At safety, he added, will be another sophomore Malachi Graham. “He’s got tremendous speed but he’s working on the knowledge of the game.”

“We’re deep. It may just depend on who had the better week of practice.”

On the line, the players who got the most time last year were end Rodricho Martin, tackle Andy Scott and Brayden Godwin, who played some inside but will get time at end this season.

“Brandon Jones is a junior that I’m really expecting to be that next defensive end in,” the coach added. “Then I’ve got some young guys. Jaylon Russ is an interior guy with a high motor. He’s going to get some playing time just because of that. Ivory Gilmore is a good pass rusher. Josh Moore, another sophomore, is a good pass rusher.

“Those guys, it hurt them being out in the spring,” Schuler mentioned. “I’d like to see them get a little bit more weight on them but they’re fast, athletic kids.

“Another guy, probably my fifth guy inside is going to be Tyler Mosley, another sophomore that the break hurt. He’ll be ready to go. He just needs more time.”

Overall, the coach said, “I feel like this group can be special, but we just need a lot of reps, a lot of time to get to that point. We’ve got guys who have done it before and then guys that really need to step up. And they can. It’s just when are they going to.”