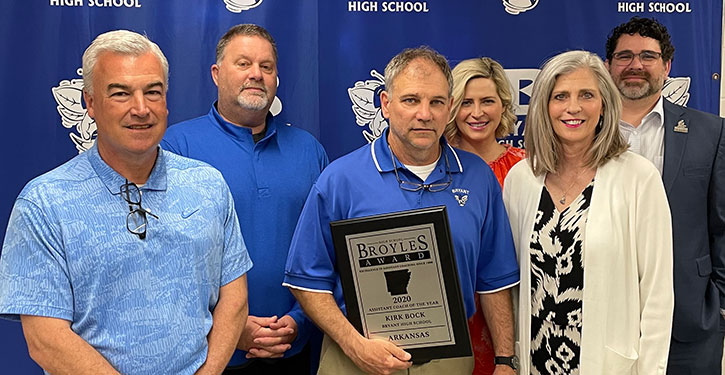 Kirk Bock has been the National Coach of the Year as a baseball coach three times and the coach of the year in Arkansas repeatedly as well.

Now while he was a head baseball coach, he also helped with football. Initially, when he came to Bryant, he served as the offensive line coach for the freshman program. But when Robert Hooks, who came in as an offensive coordinator with head coach Buck James, took a head coaching job at Osceola after one year, James turned to Bock.

Bock had called plays some for Tommy Tice at Harrison when he was baseball coach there and James went back with Bock many years.

Along the way, Bock resigned as baseball coach after leading the Hornets to three State championship in seven years. He became assistant athletic director and focused on being the offensive coordinator for the football team.

It was something that, even in his baseball days, he had wondered aloud about, running an offense full time. He thought he might be able to do it well and, to the surprise of no one, he proved it.

In the last three years, the Hornets have won consecutive Class 6A State championships with an offense that rewrote the school record book.

And, on Tuesday, the family of the late Frank Broyles was in Bryant to present the high school version of the Broyles Award for 2020 to Bock.

The Broyles Award is given annually to high school and college assistant coaches.

“He’s just a winner in everything he does,” said James, who lauded Bock for his work ethic.

Even when he was winning State championships in baseball, Bock would constantly be searching for new and better ways to make better players of his kids. It’s the same way in football.

“Our offensive coaches have had the opportunity to coach some pretty dad-gum good players,” Bock stated. “It’s not ever easy but it makes it a lot easier when you have talent out there.

“The way we work the system with Shane (Clancy) doing the running game and Adam (Pendergrass) and Julian (Jones) working the passing game then I just do pass protection and work with the quarterbacks,” he explained. “And it works out pretty good. It’s a good system.”

Regarding game-planning, Bock said, “We try to use our strengths against their weaknesses and, if our strengths are better than their strengths, we can go that direction also. A lot of times, it’s not. We try to be as good as we can possibly be at what we do. And they’ve still got to stop us.

“As far as the game-planning part, we look at strengths and weaknesses on both sides and try to figure out the best route to take.”

For any given snap, Bock, with input from Clancy, Pendergrass and Jones, makes multiple calls.

“It’s usually three,” he related. “With the RPO (run-pass option) system, there’s usually three different plays in one. The quarterback will check the routes, depending on the coverage. He’ll have three checks going in on three different coverages. We don’t know which coverage they’re going to be in. We have an educated guess. But our quarterback will make that decision just right before the snap.”

And the Bryant quarterback, Austin Ledbetter over the last three seasons, has been great at it. Savvy and football smarts is what it takes.

“It’s huge,” Bock acknowledged. “We started this stuff with Ren (Hefley) then Austin took over from there and I think our quarterbacks coming up are very well educated in what we’re trying to do. Really, the smarter you are as far as that will out-weigh your athletic ability. Just getting us in the right play’s the biggest thing. Then executing from there.”