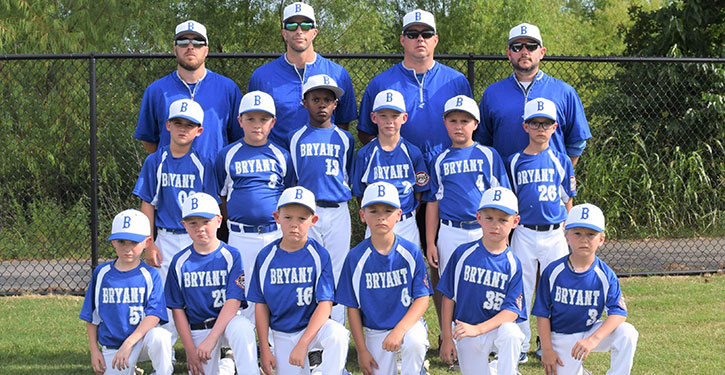 7’s reach championship game but turned back by rival

JONESBORO — For the fourth time in as many tournaments this season, the Bryant 7U All-Stars reached the finals, this time at the 2019 Cal Ripken Southwest Regional tourney at Joe Mack Campbell Park.

With a 17-2 win over the Jonesboro 7’s and a 13-7 win over Faultline of Blytheville on Sunday, Bryant reached the title game. But they ran into the rival Benton All-Stars who captured the championship with a 16-0 victory.

Scoring the maximum allowed seven runs in the first and the third, Bryant started Sunday on the right foot. Jonesboro took a 2-0 lead in the top of the first then never could get another runner past second.

In the home first, one-out singles by Gore, Horn, McNabb, Tolleson, Olson, Trusty and Baxter produced a 6-2 lead. McNabb’s hit drove in a run, Tolleson’s knocked in two, Trusty had an RBI and Baxter chased in two more. When Baker’s grounder to first was misplayed, Baxter scored to make it 7-2.

A lead-off single by Jonesboro was wasted in the second. Bryant resumed the onslaught in the bottom of the inning with a single by Canter. With one out, Lowden drove home a run with a knock to right. He would score on a single by Schultz and it was 9-2.

Despite a single and a two-out error, Jonesboro was unable to dent the plate in the third and, in the home half, Bryant put the finishing touches on the rout.

Consecutive singles by McNabb, Tolleson and Olson produced a run. Trusty knocked in another then Baxter drilled a triple to right-center, making it 13-2.

Horn capped off the uprising with a triple.

The Blytheville team struck for five runs in the top of the first. Bryant countered with four in the bottom of the inning then blanked Faultline in the second, allowing two Bryant runs to switch the lead.

Faultline came up empty in the third and fourth and, in the home fourth, Bryant tacked on three more.

In Bryant’s second, Canter led off with a double to right. The next two were retired but Schultz came through with an RBI single to deep short to tie the game. Gore doubled him in, and Bryant led 6-5.

The fourth-inning outburst was instigated by Baxter’s infield hit. Baker’s single up the middle set the table for Lowden’s two-run double to right-center. Schultz doubled down the line in left to extend the lead to 9-5.

After Faultline whittled a run off that margin in the top of the fifth, Bryant revved up the offense again. With one out, McNabb, Tolleson and Olsen each singled. Olson picked up an RBI. Trusty’s single drove home two and Baxter singled him in to make it 13-6.

Benton erupted for seven runs in the top of the first and Bryant never quite recovered. In the bottom of the inning, singles by Schultz, Gore and Horn loaded the bases but Benton worked out of the jam.

A two-run second for Benton kept Bryant’s hopes of a comeback alive. But base hits by Trusty and Baxter came to naught.

Benton was retired in order in the top of the third and Bryant threatened again to no avail. A one-out single for Lowden and a double by Schultz put runners in scoring position. But Lowden had to hold when Gore’s grounder to third was misplayed. A pop out and a grounder to the pitcher ended the inning.

Benton then blew the game up with seven in the top of the fourth. Olson managed a one-out single in the bottom of the fourth before Benton closed out the win.