SHERIDAN — A four-run rally in the bottom of the fifth brought the Bryant Black Sox AA American Legion team within a run of the Acme Brick Black Cats. But the inning ended with the tying run at third and the Sox were never able to draw even as they absorbed an 8-5 loss in their first pool play game at the annual Peoples Bank Wood Bat Classic on Wednesday night.

Classic with two games on Saturday. They’ll take on Hot Springs Village at 10 a.m. and Searcy at 3 p.m.

Acme struck for a run in the first and three in the second to gain the early advantage. Bryant picked up its first tally in the home second. Kyle Kling singled and, with one out, so did Christian Motes. Drew Brown came up with a grounder to short. An errant throw to first allowed Kling to score.

Jarod Yarborough walked but that was all the Sox could manage.

The Black Cats added a run in the fourth and another in the fifth to extend their lead to 6-1, setting up Bryant’s rally. Brown got it started with a base hit. He was awarded second on a balk. He scored when Yarborough’s grounder to second was booted. With one out, Diego Vargas walked. Jeffrey Hastings singled in Yarborough and Jacob Coppock drew a walk to load the bases.

Kling grounded into a force at second as Vargas scored. He then stole second, drawing a wild throw that allowed Hastings to score. Kling wound up at third but a strikeout ended the uprising.

Two runs for Acme Brick in the top of the sixth set the final score. 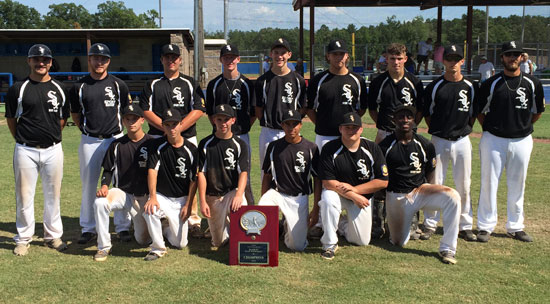