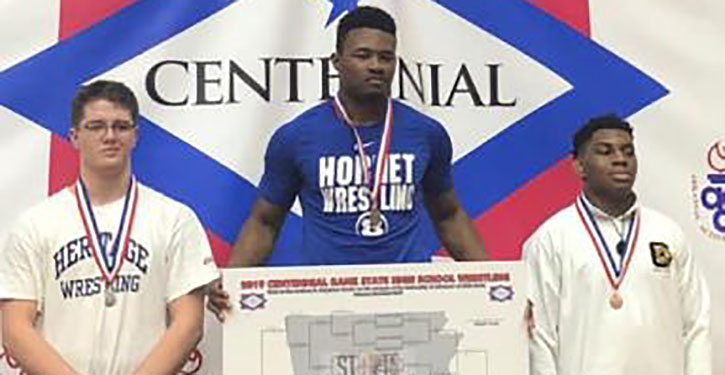 LITTLE ROCK — Ahmad Adams hasn’t been a wrestler for long time but when he got started, he sure took to it. On Saturday, the Bryant Hornet junior, who also starred for the State championship football team, captured the State championship in the 220-pound division of the Class 6A wrestling meet by defeating Chris Pointer of Rogers Heritage in a 5-4 decision.

As a team, the Hornets finished with 71 points, good for 12thplace in the 17-team field. Bentonville won the team title with 263 points.

Senior Austin Trimble, who, like Adams, won a conference championship, wound up third in the 285-pound division. In the third-place match, Trimble won a 7-3 decision over Ho’opono Doctorello of Bentonville West. Trimble, who played along the offensive line (mostly center) for the Hornets’ football team, no doubt tangled with Doctorello when the Hornets football team defeated Doctorello, a defensive lineman and the West Wolverines early in the 2018 gridiron campaign.

The State meet was held at the Jack Stephens Center on the campus of the University of Arkansas-Little Rock.