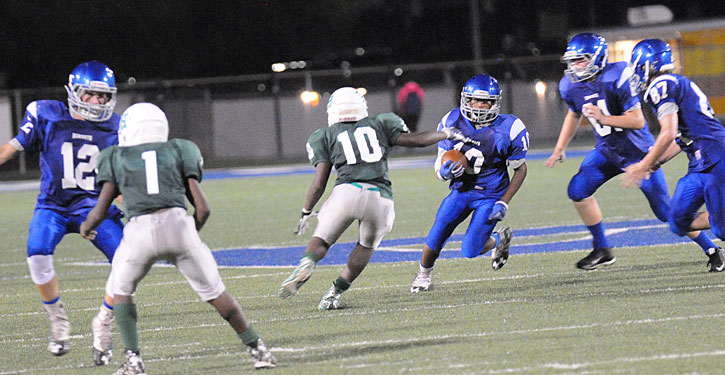 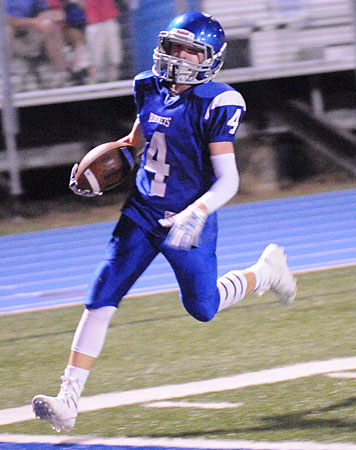 River Gregory steps into the end zone at the end of his 67-yard touchdown run. (Photo by Kevin Nagle)

Much of the night, on offense, Bryant Blue Hornets eighth grade team of Bethel Middle School was faced with a defense from the Pulaski Heights Panthers that was crowding the line of scrimmage with six, seven, even eight in the box. And they were all attacking.

It was a gamble by the Panthers but they were able force the Hornets into lost-yardage on 14 of their 27 total snaps.

But on two plays, Bethel burned them and, behind a defense that was a little more standard but just about as stingy, that was enough for the Hornets to come away with a 12-2 win on Tuesday night at Bryant Stadium.

Bryant Blue’s first big play came with 1:12 left in the first half when quarterback Garrett Wilson found Ryan Riggs wide open behind the defense for a 33-yard touchdown pass. Then, with the Hornets clinging to a 6-2 lead with less than two minutes to go, running back River Gregory, who had been shackled all night, broke a game-clinching 67-yard gallop to set the final score. 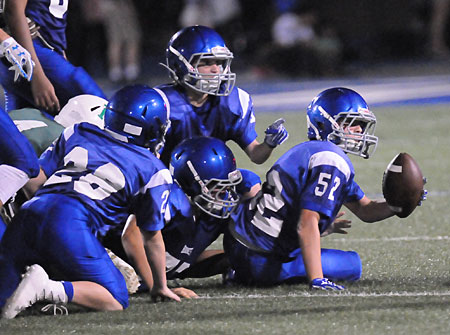 Brayden Godwin (52) shows the official he has the ball after recovering a fumble. (Photo by Kevin Nagle)

“It was definitely a defensive game,” said Hornets coach Josh Akers. “Our defense bailed us out — a couple of turnovers, a good pick there in the secondary to give us a chance to drive back down. We were lucky that we were able to repay them there with a couple minutes to go.

“I’m extremely proud of Coach (Colton) Bond and the defense and what they did in preparation this week,” he added.

Thanks to a strong return of the opening kickoff by Xavier Foote, the Hornets opened the game on offense at midfield but their first two plays lost yardage as the Pulaski Heights’ defense sent more players than the Hornets could block.

Bethel wound up turning the ball over on downs at the Panthers’ 45. 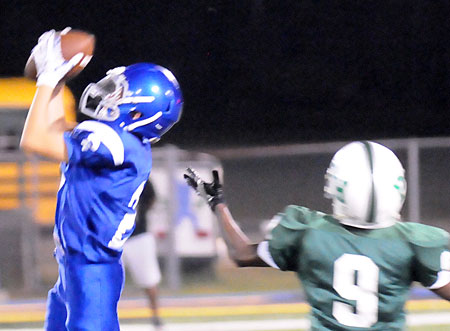 The best drive of the night for Pulaski Heights was the first one. They picked up a pair of first downs and reached the Bethel 26. But a third-down play was stopped cold by the Hornets’ defense and a fourth-down pass fell incomplete.

Bethel lost yardage on two of its three plays in the subsequent series and Baker Gray came on to punt. The Panthers wound up with good field position at the their own 42 but, on first down, Hayden Schrader and Abram Montoya dropped tailback Samuel Franklin for a loss. A second-down pass from Jeremiah Davis to Jordan Woodley picked up just 2 yards thanks to a nice tackle by Riggs. On third down, Schrader sacked Davis for a loss of 8.

Still, the Panthers went for it on fourth-and-17 at the Bethel 35 but that play was spoiled by Parker Elswick who dropped Davis for a 2-yard loss. 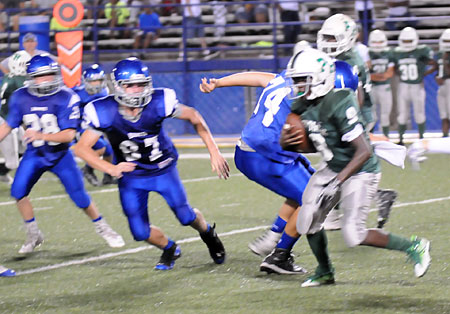 The Hornets took over at their Pulaski Heights 33 and, on second down, Wilson and Riggs hooked up for the score.

“On first and second down, they were sending six or seven every time, probably anticipating we were running between the tackles,” Akers said of the Panthers’ defense. “And it hurt us most all night.

“But they definitely stacked us and limited our rushing yards between the tackles, for sure,” the coach acknowledged. “It was a tough, tough win. It’s hard to get them and this was no different tonight. Hats off to Pulaski Heights, Coach (Ron) Calcagni. They have a very tough football team, very physical. They gave us nothing. We had to earn every inch we got tonight.”

Penfield recovered the onside kick following the TD but Wilson’s 10-yard run was negated by a holding penalty. The next two plays lost yardage back to the Bethel 17. On third-and-33, Wilson was chased out of the pocket and back to inside the 5. Surrounded, he tried to drop off a pass to Gregory. But it was a lateral. Gregory had to grab it or the Panthers could recover for a touchdown. But, after he made the catch, Gregory was tackled in the end zone for a safety, making it 6-2 with :29.6 left in the half.

To start the second half, the Panthers covered the onside kick and, with the help of a face mask penalty, reached the Bethel 34. Fullback Savon Strong, however, never found the handle on a first-down handoff and Godwin claimed the ball for the Hornets.

Gregory dashed for 13 yards on first down but a holding penalty negated the run and the Hornets were unable to dig out of the hole. Gray punted and Pulaski Heights got the ball back at its 42.

On first down, Jack Powell stopped Franklin for a loss. On the next play, quarterback Danny Johnson tried to throw only to have Schroeder pick it off.

This time, Wilson set said on a 34-yard run only to have it called back due to an illegal block. That led to another punt.

As the fourth quarter began, the Panthers, who never punted in the game, ran four plays and turned the ball over on downs at their own 32. But the Hornets were unable to take advantage. Gray picked up 10 yards on first down but then a trio of errant snaps resulted in Pulaski Heights getting the ball back on downs with 4:07 left.

Two plays got the Panthers into Bethel territory but, on a third-and-4, Strong lost the ball again and Frederick recovered.

The Hornets’ frustrations on offense continued when Gregory lost 8 yards then Wilson lost 4. That set up a third-and-22 at the 33. Pulaski Heights, in anticipation of getting the ball back with a chance to win, took a timeout with 1:50 left.

When play resumed, Gregory skirted right end and appeared to be stopped after a short gain. But the Panthers couldn’t bring him down. He broke clear and raced for the clinching TD with 1:36 left.

“We found a way,” Akers said. “That’s all that matters. At the end of the night, we’re ahead on the scoreboard; happy team, happy fans, happy coaches. We’ll take it.” 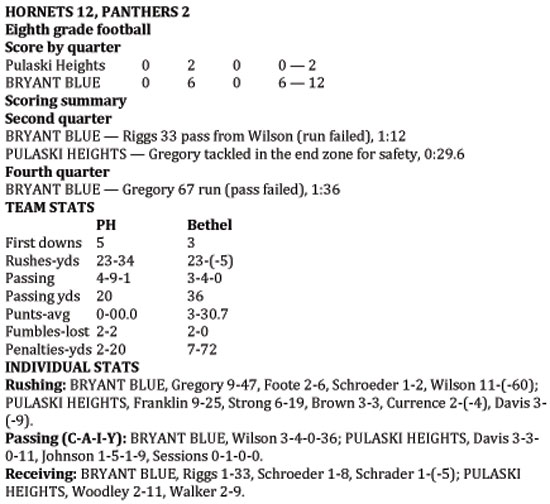