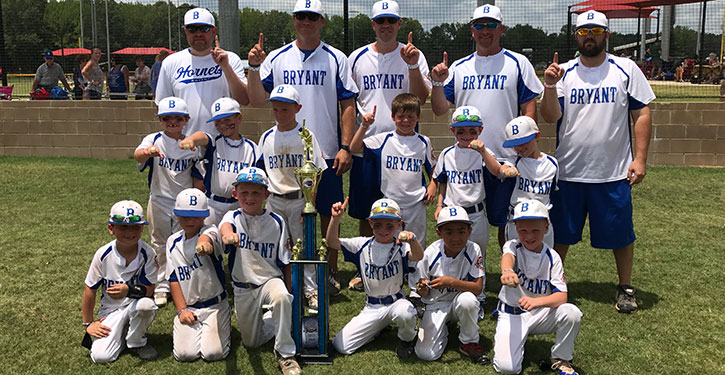 Another championship for Bryant 6-and-under team

CABOT — The Bryant Athletic Association All-Stars will head into the Cal Ripken 6-and-under Regional tournament at Arkadelphia next week with a pair of championships under their belts as they continued an undefeated season today. After winning the T-ball State tourney last weekend, they added the championship of the USSSA State Tournament this week, finishing off a four-game sweep with a 15-5 victory over the Blytheville Chaos in the title game. Earlier this afternoon, the ousted the Walnut Ridge Bombers, 21-6.

A 7-0 start in the first inning put Bryant on the road to victory after Blytheville was unable to score in the top of the first.

Bryant’s Stars actually retired the first seven Chaos batters before the Blytheville team managed a run in the third inning.

To their credit, the Chaos found a way to limit Bryant’s high-scoring offense to just one run in the second with Verdell scoring on hits from Martin and Brothers to make it 8-0.

After Blytheville scored in the third, Bryant scored the maximum number of runs allowed again in the bottom of the third as Lloyd, Jackson, Sory, Hogland, Summers, McCrary and Atkins all crossed the plate to make it 15-1.

Blytheville countered with four runs in the top of the third but it wasn’t enough to keep them in the game as Bryant celebrated the championship.

Bryant had defeated Walnut Ridge in pool play. The rematch didn’t go much better for the Bombers who took a 1-0 lead in the top of the first but never led again. Bryant took its turn and put up a max inning to take a 7-1 lead. Verdell, Martin, Brothers, Andrews, Lloyd, Jackson and Summers each dented homeplate.

Walnut Ridge eked out another run in the top of the second before Bryant maxed out for the second of three times in the contest. This time, Sory, McCrary, Verdell, Robertson, Martin, Brothers and Andrews scored as Lloyd capped off the inning with a hit.

The Bombers scored four times in the top of the third to keep their thin hopes alive. But Bryant turned 14-6 into 21-6 in the home half to put the game away.

Jackson, Summers, Hogland, Sory, McCrary, Atkins and Verdell scored. Robertson had the final hit to nail it down.