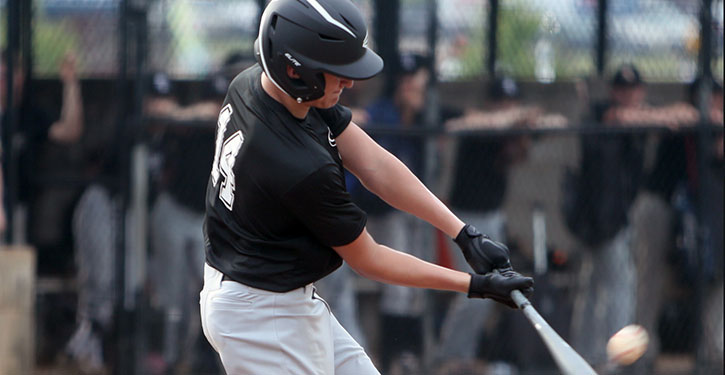 Baseball returned with a bang in Bryant Wednesday night when Aden Palmer smashed a walk-off homer to make the Bryant Black Sox Junior American Legion team an 8-7 winner over the Lakeside Juniors at Bishop Park.

It was the first game for a Bryant team since the high school Hornets came back from Waxahachie, Texas, off a 3-2 win over Midlothian on March 7. After that baseball and almost everything else was shut down to try to curb the spread of the COVID-19 virus.

In a game that was supposed to go seven innings or a maximum of two hours, whichever came first, the time limit had passed with the teams tied 7-7. Lakeside had tied it with a run in the top of the sixth. With one out in the bottom of the inning, Palmer got an inside fastball and yanked it over the fence in left.

In a second game, the Sox were leading 4-2 when the power went out at the park (among other places in town) and the game was called.

The Junior Sox are set to play again next Wednesday against Bauxite at 6 p.m., followed by the season debut for the 17U Sox at Bishop.

“We’ve been out here hitting batting practice,” mentioned Sox manager Darren Hurt. “We’ve had (Sox alums) Jake Wright, Logan Chambers, Logan Allen — we’ve had them all out here. Our senior team and everybody’s been out here and they’ve been talking about the fact that they can’t hit it out of here. I mean, by now, we’d have a home run at the high school field, in batting practice anyway.

“So, then the Palmer kid walks it off today and that’s why all the Senior guys were running into the dugout because they couldn’t believe it,” he chuckled.

Otherwise, the play was a little rough as might be expected. The team has only been practicing for about a week.

“It was good to get out here and play after all this stuff,” Hurt said referring to the virus shutdown.

“We’ve got a lot of work to do with this group,” he added. It was the first American Legion play for the players who are all 15 or 16 years old.

“There are things that you take for granted that they just don’t know yet, that we haven’t gotten to,” the manager continued. “We’ve covered a lot, but we’ve got a long way to go. We’ve got to do better on the mound and things like that. We’ve got a lot of arms. We had two more ready to go. That’s why I hate what happened.

“We’ve been throwing bullpens for a week now and that’s why we treated it kind of like another bullpen today,” he said. “They just haven’t had any game experience. They’re just rusty.

“But, overall, we did get a win,” Hurt concluded. “They scratched around and did enough.”

Gage Horn had two hits. Dynamic lead-off man Jordan Knox was on base three times, stole a pair of bases and scored twice.

Lakin Woods, Luke Bickerstaff, Hunter Holt and Clay Crawford got work in on the mound in the first game then Tucker Dunn, Horn and Carson Kemp pitched in the abbreviated second game.

Woods worked around a double and a single in the top of the first inning then the Sox took the lead in the home half. Knox reached on an error to start the frame. He stole second. Horn beat out an infield hit and when the throw from shortstop got away, Knox hustled home.

The seesaw began to teeter when Lakeside scored twice in the top of the second on a one-out error, a two-out walk and an infield hit. An errant pickoff throw got the second run in.

Bickerstaff walked a batter but ended the inning with a strikeout as Lakeside stranded a runner at third.

Bryant regained the lead in the bottom of the second. A one-out walk to Dunn was the catalyst but pinch-runner Grant Dunbar moved up to second on a groundout by Crawford. Knox slapped an RBI single to right to tie it.

Knox sprinted to second on the late throw to the plate. He followed with his second stolen base and scored when the catcher’s throw to third was wild.

Lakeside took its turn with a three spot in the third. A lead-off single by Brock Prince was the only hit of the frame. Chase Tittle was struck by a pitch then a wild pitch allowed them to move up to second and third. A late wild throw to try to get the man going to third was errant and it was 3-3.

Tittle wound up at third and, after Brennan Browning worked a walk, they executed a double steal to break the tie.

With two out, a hit batsman on an 0-2 count extended the inning. Another double steal made it 5-3.

Kemp beat out an infield hit to start the Sox’ third. Matt Griffe walked and so did Hunter Holt, pinch-hitting for Bickerstaff. A one-out walk to Palmer forced in a run. Brady Brower, running for Griffe, tried to score on Dunbar’s tap to third but was thrown out at the plate.

Lakeside extended the lead in the top of the fourth. Holt’s first pitch struck Yancey Rainwater but he followed with a strikeout of Adrian Aguirre. Toby Douglas beat out an infield hit then Brice Browning loaded the bases with a solid single to left.

Holt and Wyatt Gibson batted to a 3-2 count but ball four forced in a run.

But Prince lined into a doubleplay to keep it 6-4.

The Sox tied it in the home fourth. After two were out, Kemp worked a walk. Griffe was struck by a pitch and, after a wild pitch moved the runners to second and third, Holt came through with a two-run single.

A walk to Brady Brower brought up Palmer who hit the ball hard but his drive to right center was flagged down by Brennan Browning to end the inning.

The Sox took a 7-6 lead in the bottom of the fifth. Crawford singled with one out and took second on a wild pitch. Knox walked then Horn beat out a bunt single to load the bases. Kemp walked again to force in the go-ahead tally.

The Sox, however, stranded three.

In the top of the sixth, Hank Ellison greeted Crawford to the mound with a single to center. But he was forced at second on a grounder to third. With two out, Aguirre was hit by a pitch. The count went to 0-2 on Douglas but the runners were moving on the second strike. An errant throw to third allowed the tying run to score.

Aguirre was tagged out trying to get to third on the play, ending the inning and setting up Palmer’s dramatic blast.

In the second game, the Sox scored in each of their three at-bats, building a 4-0 lead. Without a hit, Lakeside scored twice in the top of the fourth. A two-out single to right was the first hit allowed by the Sox’ pitchers in the game but the inning ended when catcher Gavin Burton picked off the runner at first.

Knox was hit by a pitch to start the bottom of the first. He stole second, went to third on a wild pitch and scored on Holt’s one-out tapper to the right side.

In the second, Brower was hit by a pitch with one out but was forced at second on a grounder to short by L.Hernandez. Crawford singled to left then walks were issued to Knox and Kemp to force in Hernandez.

In the third, Holt led off with a triple to right-center. Bickerstaff walked and stole second. Woods got a bunt down and it was misplayed by the Lakeside catcher allowing Holt to score.

Brower’s bunt single plated a second run to make it 4-0.

Dunn had pitched around a game-opening walk in the first. An error allowed a runner in the second, but Dunn picked him off.

In the third, Horn pitched around a two-out walk, fanning two. But he ran into trouble in the third when Prince and Brennan Browning drew walks. On a double steal, an errant throw to third allowed Prince to score. Bickerstaff robbed Aden Easter of a hit but Browning, who was running on the pitch, was able to sprint home ahead of a relay to the plate.

A two-out walk to Ellison brought on a pitching change. He was greeted by the single which was the first hit for Lakeside. 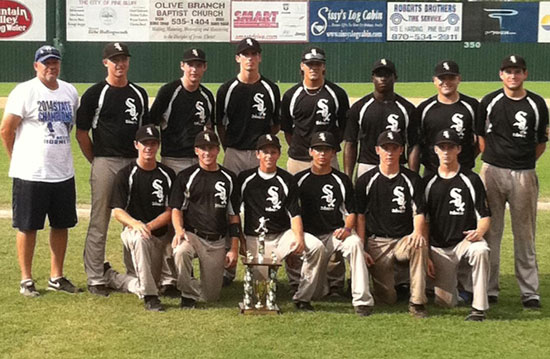