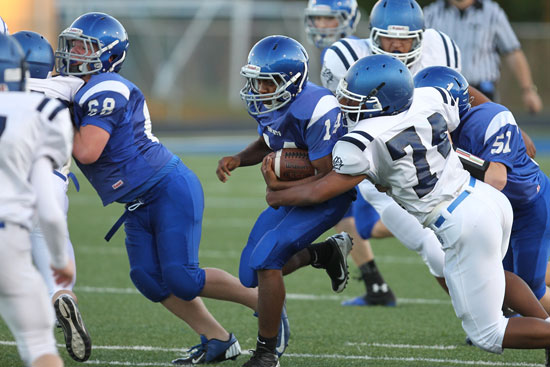 The Conway White Wampus Cats erased a 20-7 deficit to take a 21-20 lead with just 2:26 left in Thursday’s eighth grade game against the Bryant Blue Hornets of Bethel Middle School. 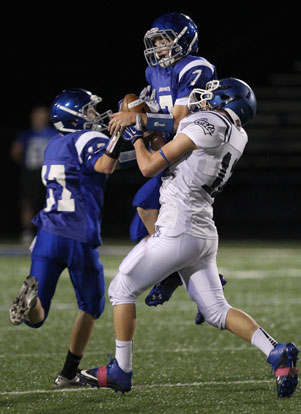 Cameron Vail (7) latches onto a Conway White pass intended for Logan White (12) with Matt Sandidge (17) helping out on the play. (Photo by Rick Nation)

But the Hornets, shutout in the second half to that point, drove 57 yards in three plays, mostly on a screen pass from Cameron Vail that Diante Woodson broke for a 45-yard touchdown with 1:28 to go. With Vail’s pass to Christian Harp for the two-point conversion, the Hornets held a 28-21 lead.

Conway made a bid to answer but with 0:32 left, Vail intercepted a long pass from Garett Fusilier intended for Logan White. When Vail came down with the ball, White tried to wrest it away and the Wampus Cats’ coaches lobbied for duel possession (which would’ve made it a completion) but to no avail.

The Hornets used up the last of the time and extracted the victory, improving to 6-2 going into Tuesday’s season-finale at Benton.

Bethel jumped to the 20-7 halftime lead sparked by Parker Littleton’s interception on the second snap of the game. Sniffing out a screen pass, Littleton stepped in front of the intended receiver and caught the ball in stride with nothing between him and the end zone but green turf.

Conway White put together a drive into Bryant Blue territory but once the Cats made it to the 34, the Hornets defense made stops on third down and fourth down to give the ball back to the offense. Jonathan Smith, Kobi Riffe and Ryan Harris made the stop on third down. On fourth, it was Riffe, Jonathan Santos and Logan Rich.

The Hornets drove to near midfield then, on a third-down play, Smith rumbled 48 yards for a TD, making it 12-0. 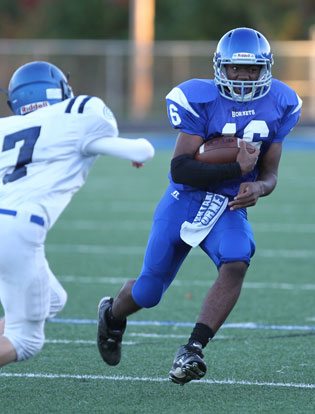 Jonathan Smith (16) maneuvers around a Conway White defender on the way to a 48-yard touchdown run. (Photo by Rick Nation)

After the kickoff, however, Conway White’s Carson Petruccelli broke a speed sweep for 64 yards to get his team on the board. Will Kennedy added the extra point and it was 12-7 with 5:05 left in the half.

The Hornets had their own response, a nine-play, 63-yard drive for points. Behind the running of Woodson and Vail, they reached the Conway White 21 but a run by Woodson to the 15 was negated by a holding penalty. Pushed back to the 31, Vail faked a handoff, rolled slightly to his right then threw back to Woodson streaking down the left sideline on a wheel route. Woodson hauled in the throw and scored.

The second half didn’t start as well as the first had for the Hornets. In fact, Conway White turned the tide by forcing a turnover. White sacked Vail, knocked the ball loose and recovered it at the Bethel 43.

Nine plays later, Fusilier snuck in for the touchdown from the 1, moments after running back Brennan Clark broke a 13-yard run. Kennedy added the extra point and it was 20-14 with 1:32 left in the third quarter.

A pair of holding penalties undermined the Hornets’ subsequent possession and Luke Welch came for the lone punt of the game. 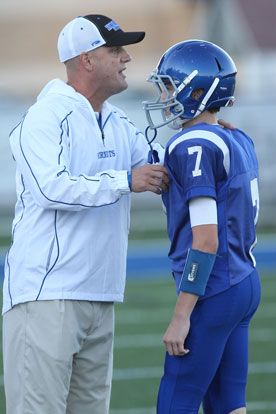 The kick took a Conway White bounce and the Wampus Cats’ offense returned to the field just 14 yards away from tying or taking the lead. The drove to the 26 where, on a third-and-8, Fusilier threw flat pass to White that he turned into a 25-yard gain. Clark carried it over from the 1 and with Kennedy’s kick, it was 21-20.

Woodson made a nice return of the ensuing kickoff and the Hornets opened up at their own 43. Vail kept for 5 yards then threw a 7-yard pass to Jacob Thomason for a first down. That set up the screen to Woodson that he turned into the game-winning score.

Bethel Dance
A ‘Thriller’ of a halftime