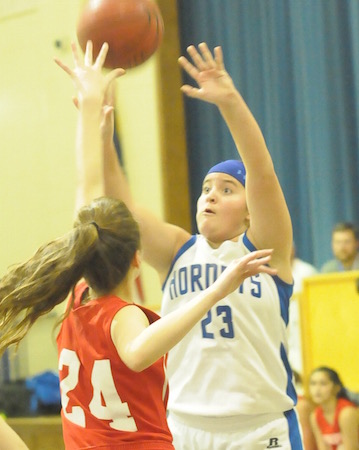 Addison Funk follows through on a jumper. (Photo by Kevin Nagle)

Stifled by the Lady Hornets’ defense, the Lady Panthers didn’t score again until the 5:28 mark of the fourth quarter. By that time, Bryant Blue had piled up a 30-3 lead.

For the game, the Lady Hornets held Cabot North to just three field goals as they cruised to a 36-9 victory at the Bryant Middle School gym.

Ashton Inman led the Bethel team with 13 points. Twin sister Abbey Inman added 6 on a pair of 3-pointers while Addison Funk pitched in with 5. Baylee Hutchison and Meagan Brown scored 4 each with Kattrina Johnson and Ryleigh Laughlin scoring 2 apiece.

Scoring was not the only thing that the Lady Panthers went a long time without but, in addition, they did not commit a foul in the game until there was just 4:13 left in it. The foul resulted in Bryant Blue’s only two free throws of the contest. 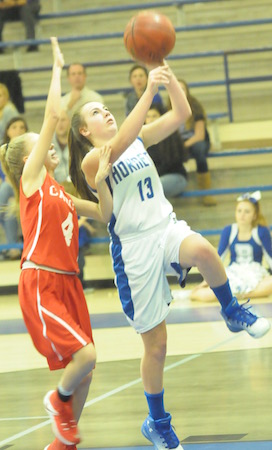 Baylee Hutchison goes up for a shot after getting past a Cabot North defender. (Photo by Kevin Nagle)

Ashton Inman scored 4 of the Lady Hornets’ first 6 points. Funk supplied a layup. Trailing 6-0, Cabot North called a timeout with 4:22 left in the opening period. With 3:01 left, the Lady Panthers scored their only field goal of the first three quarters. After the free throw made it 6-3, the Lady Hornets took advantage of a turnover when Abbey Inman knocked down a 3 from the top of the key.

That made it a 9-3 game going into the second quarter. And less than 30 seconds into the new period, Abbey Inman popped another trey. And when Johnson followed with an offensive rebound basket with 5:06 to go in the half, the Lady Hornets had a lead that was never less than double digits the rest of the way.

Before the half was over, Laughlin added to the scoring then Funk and Ashton Inman drained triples to make it 22-3 at the break.

Cabot North did not score in the second nor third period. For Bethel, Hutchison scored twice midway through the quarter, her second bucket off an assist from Brown. In the final minute of the third, Brown hit a layup and a short jumper to extend the margin to 30-3.

The Lady Hornets, now 5-6 on the season, return to action on Monday, Jan. 23, against North Little Rock. 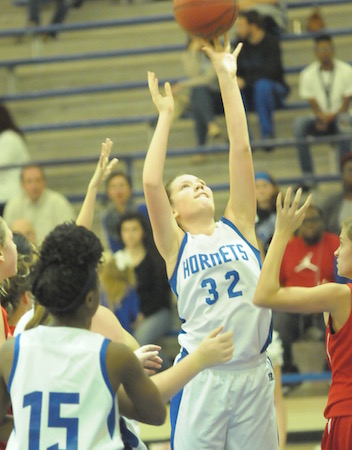 Lexi Feagin (32) shoots over a Cabot North defender as Rachel Eggerson (15) gets into rebounding position. (Photo by Kevin Nagle)