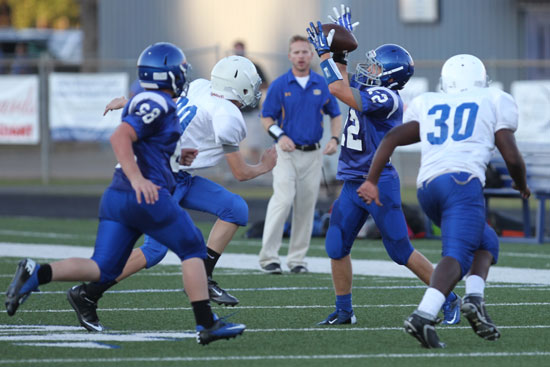 At the first of the season for the Bryant Blue Hornets eighth grade team of Bethel Middle School, Mike Jones was throwing touchdown passes to Cameron Vail. But, since then, Jones suffered a broken left wrist and Vail has taken over at quarterback. Jones has since returned with a padded cast and on Thursday night at Bryant Stadium, he was the one catching the touchdown passes — two of them, in fact, as Bethel built a 21-6 lead over the Junior Charging Wildcats of North Little Rock East. 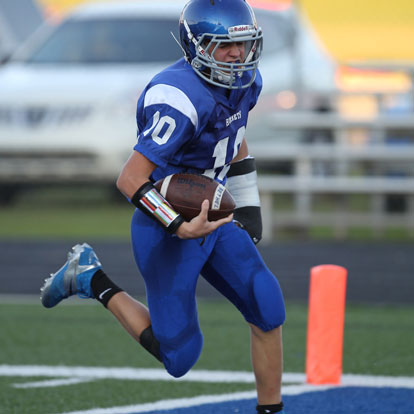 Mike Jones crosses the goal line with one of his two touchdown receptions. (Photo by Rick Nation)

The Cats scored in the last few seconds to make the final count, 21-14.

Thus, the Hornets bounced back from a disappointing loss at Conway the week before and heads into the annual Hornet Bowl next Thursday against Bryant White with a 3-2 overall record.

Bryant Blue dominated the first half. The defense held the Wildcats to a net of just 2 yards of total offense without a first down. And the offense helped running 25 plays to North Little Rock East’s nine offensive snaps.

The Hornets’ frustrations carried over a bit as they drove into the red zone on each of their first two series only to have fourth-down passes fall incomplete. After the defense forced the Wildcats’ third straight punt, however, the Hornets drove from their own 48 to the North Little Rock 33, mostly on Vail’s 11-yard keeper. On a fourth-and-2, Diante Woodson slashed for 3 yards and new set of downs.

On the very next play, Jones ran an out-and-up with Vail pump-faking on the out to draw the defense. He then lofted a perfect pass to his target, who was behind the secondary. Jones caught it in stride and ran it in for the touchdown to make it 6-0 with just :43 left in the half.

On the ensuing kickoff, a pooch kick by Luke Welch was fielded by North Little Rock’s Christian Litton, on of the up-backs. But when a teammate collided with Litton, the ball came loose and Bethel’s Jacob Thomason claimed it at the 32. 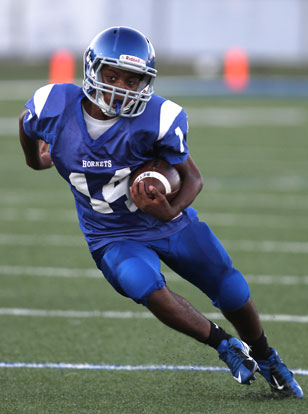 With :39 left, Vail connected with Jones for 10 yards. Woodson had a sparkling run to the 5 negated by penalty and the Hornets wound up running out of time and downs.

But they got the ball to start the second half and picked up where they left off with an impressive 81-yard march in nine running plays. Woodson sparked the drive with a 17-yard bolt. Vail kept for 16 and, after Woodson was shaken up on a 2-yard run, Jonathan Smith came on and powered for runs of 11, 9, 2 and 4. On a second-and-6, Woodson returned and scorned from the 14.

Vail threw to Parker Littleton for the two-point conversion and it was 14-0 with 2:58 left in the third quarter.

North Little Rock East, behind the running of Marcus Christopher answered with a 69-yard scoring drive. The Hornets almost stopped the march, forcing a third-and-9 at the Bethel 48 but quarterback Weston McGhee found big tight end John Matthew Rogers for 14 yards to the 34.

Christopher followed with a 12-yard run to set up his 22-yard touchdown tote.

The Wildcats lined up for a two-point conversion with a shift, another shift then put a man in motion. McGhee threw to Juwan Terry for a successful attempt but in all the shifting, the Cats had done so illegally, starting one before the previous one had set. They tried the run the play again only ran out of time on the play clock during all those shifts, forcing them to call a timeout. When play resumed, they executed the play one more time. But, by then, the Hornets had it figured out and foiled the pass to keep it 14-6. 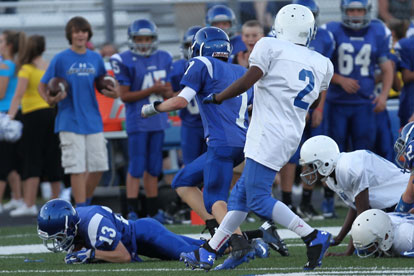 The Bethel offense answered with another scoring drive though the Hornets had to overcome a holding penalty after they reached the 22 behind the running of Smith and Woodson. From the 32, Vail kept for 8 yards to the 24 then, on a third-and-9, he optioned out, pulled up and fired a strike to Jones for the touchdown.

North Little Rock East, with McGhee completing 7 of 11 passes, added the late score. The Wildcats reached the 6 but when Cole Campbell dropped Christopher for a loss, an unsportsmanlike conduct penalty was tacked on against North Little Rock. Another penalty made it third-and-goal from 31 yards out. McGhee got the ball down the left side to Christopher, who hauled the ball in despite tight coverage, for the touchdown.

All the Hornets had to do was field the onside kick and Matt Sandidge took care of that task. Vail took a knee and Bryant Blue had the win secured.