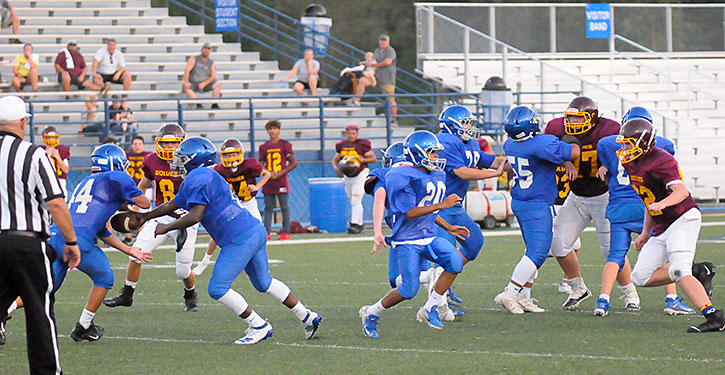 J.T. Allen each ran 70 yards for a touchdown and Jaysean Robinson ran for a score on offense and added a fumble return for a TD as the Bryant Blue Hornets seventh grade team of Bethel Middle School won 22-8 in a half against the Lake Hamilton Wolves’ seventh grade on Monday night at Bryant Stadium.

“Overall, we played okay,” said Hornets coach Colton Bond. “We have a lot of things to clean up. Our mental focus, I felt, was off with the different format.”

The B teams for the two schools played the second half.

“Our young men played well, though,” Bond said. “We just have to continue to get better each week.”

Allen finished with 94 yards on just two carries. His first, a 24-yard bolt, coupled with a 21-yard pass from Jordan Walker to Karter Ratliff set up Robinson’s 18-yard touchdown run. Walker threw to Matthew Glover for the two-point conversion.

Lake Hamilton tied it with a nine-play, 70-yard drive and when the Wolves added their conversion, the game was tied.

On Lake Hamilton’s next series, they ran a toss sweep. Robinson snatched the ball away from the ball carrier and sprinted to the end zone for a clinching touchdown. Walker ran in the conversion to set the final score.

A sack by E.J. Keith ended the Wolves’ last possession.

Ryan Reynolds led the Hornets with three tackles and a pass break up.

The next game for Bryant Blue is the Hornet Bowl against Bryant White on Monday, Oct. 14.