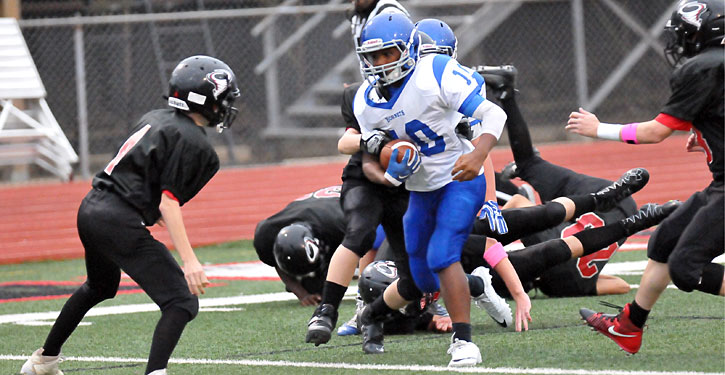 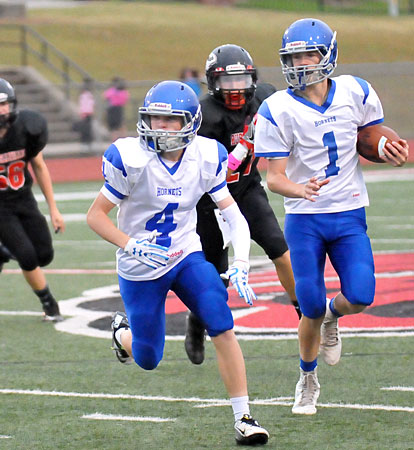 And the Hornets needed every point as they held off a last-minute drive by the Whirlwinds to escape with a 33-27 victory.

That’s 60 points in a game with seven-minute quarters.

The win improved Bethel to 5-1 on the season going into a trip to Conway on Thursday, Oct. 27. It was the fourth consecutive victory for the Hornets since a 22-6 loss to Cabot North on Sept. 8 — a win streak that includes the 12-6 win over Bryant White in the annual Hornet Bowl.

Russellville appeared to be determined to not let Bethel’s top rusher River Gregory beat them. Using a run blitz, they kept him to 16 yards on eight carries. But Xavier Foote contributed a pair of good runs along the way and Wilson wound up the leading runner for the game with 52 yards on 11 runs even though the blitz got to him a time or two for losses on pass plays. 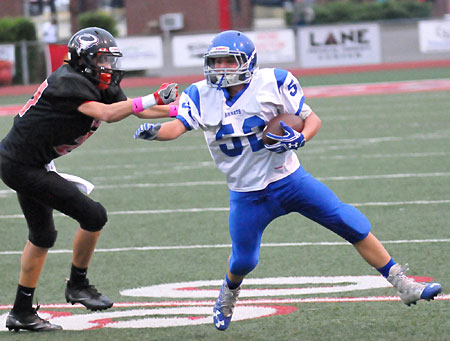 Bethel linebacker Brayden Godwin, evades a tackler as he heads up the field after taking the ball away from a Russellville runner. (Photo by Kevin Nagle)

But the risky defense proved to burn the ‘Winds’ about as often as it produced lost yardage.

Russellville rallied behind the throwing of strong-armed Brayden Whitford, who completed 14 of 23 passes for 227 yards and three touchdowns.

The Hornets built a 14-0 lead in the first quarter but by scoring on their final possession of the first half and their first in the second half, the Whirlwinds tied it at 14.

It didn’t stay tied long, however, as Wilson, with a pass rusher in his face, found Hayden Schrader open behind the Russellville secondary for a 65-yard touchdown.

Brock Funk came on to attempt the extra point but a bad snap sabotaged the hold and it came up short. The play, however, had been whistled dead before the kick. A penalty flag had made the play dead even though it was against the Hornets. The false-start infraction moved the ball back but, from 25 yards away, Funk drilled the extra point to make it 21-14. 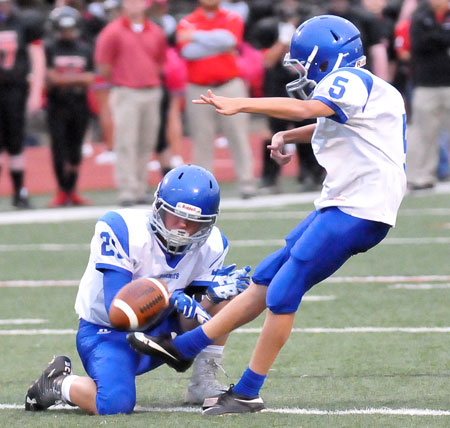 Brock Funk attempts an extra point out of the hold of Hart Penfield. (Photo by Kevin Nagle)

Funk’s kickoff went deep and past return man Blade Satelo, who retreated and picked up the loose ball at the 5. He did well to get back to the 14. On the next play, a high snap got over Whitford’s head. He scrambled to scoop the ball up in the end zone and battled out to the 4.

Two plays later, Whitford was punting out of his own end zone. A short kick was downed at the Whirlwinds’ 37. And the Hornets took advantage to add to their lead.

After an 11-yard run by Foote, a loss, an incomplete pass and a penalty had Bethel facing a third-and-17. Wilson scrambled away from the rush and tight-roped the sideline for 14 yards to set up a fourth-and-3 at the 19.

The Hornets went for it. Wilson targeted Schrader again on a pass down the seam but it deflected off his hands as he reached up for it. Fortuitously, it went right to Ty Bahnks inside the 5. He grabbed the deflection and ran in for the touchdown to make it 27-14. 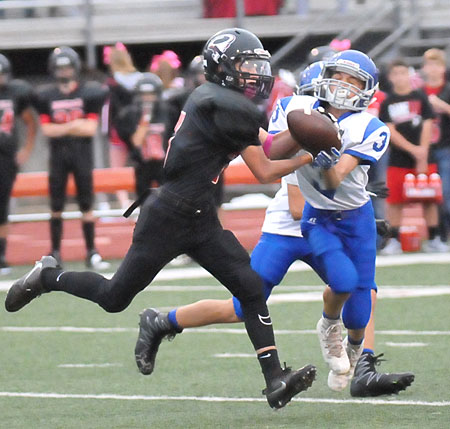 As the Hornets had earlier in the quarter, Russellville answered in short order as Whitford threw deep to Reid Wolfe and it went for a 55-yard touchdown. The extra-point attempt by Caleb Gray was short, leaving it 27-20 going into the fourth quarter.

Foote nearly broke the ensuing kickoff. A squib kick, he picked it up at the 35 and wove his way 39 yards to the Russellville 26. That set up Wilson’s swing pass to Gregory, who avoided a tackler in the backfield and jetted 17 yards for another TD, making it 33-20.

With 5:41 still to play, Russellville started an answering drive in which Whitford went 4 of 5 passing. He appeared to be sacked on a first-and-10 at the Bethel 31 but somehow kept the play alive before throwing to Landon Lefevre on a 30-yard pass that set up his 1-yard keeper for the touchdown.

Gray added the extra point to make it 33-26. It gave the Whirlwinds a path to victory. If they could hold the Hornets then score, they could win on another successful point-after. 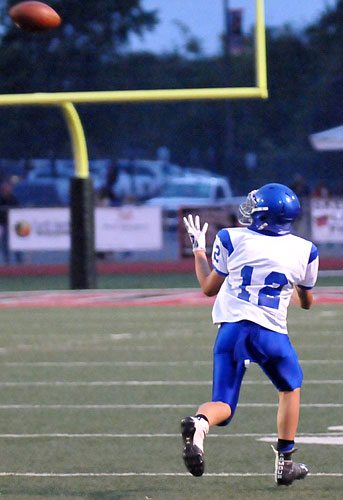 Hayden Schrader caught this pass on the way to a 65-yard go-ahead touchdown. (Photo by Kevin Nagle)

A pooch kick on the ensuing kickoff wasn’t fielded by the Hornets but went out of bounds before Russellville could claim it.

From their own 45, the Hornets tried to run clock but, against the aggressive Whirlwind defense, they lost yardage on the first two plays. Wilson kept for 18 yards to set up a fourth-and-1 at the Russellville 46 with just under three minutes left in the game.

Hoping to put the game away with a first down, the Hornets were unable to convert as Wilson was overwhelmed at the 48.

So the Whirlwinds had the ball at their own 45 with 2:09 in which to score. With that time, they ran the ball effectively for the first time all night. Kobe Robinson and Maurice Rhode each had runs of 12 yards.

From the Bethel 23, however, things got tougher. Braydon Godwin stopped a play for no gain then Whitford appeared to have room to run only to have Austin Schroeder come up from the secondary to make a great open-field tackle for no gain.

A third-down pass to the end zone fell incomplete and, on fourth down, Whitford’s pass towards the pylon sailed beyond the reach of his intended receiver and, with :25 left in the game, the Hornets took over on downs, cinching the victory.

To start the game, the teams traded punts. Thanks to a 49-yard boot by Baker Gray, the field turned over. Russellville’s first possession started at its own 19. The Whirlwinds went three-and-out. Whitford’s punt was close to being blocked by Braden Robinson and it went just 23 yards.

From the Russellville 44, the Hornets drove for the game’s first touchdown. Wilson had a 16-yard run and Foote a 14-yard run, setting up a 3-yard touchdown pass from Wilson to Schroeder.

On the Whirlwinds’ subsequent possession, they appeared to have a first down on a run by Rhode only to have Godwin yank the ball out of the running back’s hands. He took off towards the end zone and, though he was denied, he got the ball to the 28.

A play later, Gregory got loose, scoring from there. Funk added the PAT and it was 14-0 going into the second quarter.

After a series of punts, the Hornets had the ball at their own 35. Wilson threw to Schrader for 10 yards but, on the next snap, he was caught by the Russellville blitz and sacked. A third-down pass was intercepted by Chip Stiles with 1:18 to go.

Russellville worked the ball to the Bryant 36 but, with :33 left, faced a fourth-and-3. Going for broke, Whitford found Brady Burnett for a 35-yard touchdown pass to get the Whirlwinds on the board.

Their TD drive to start the second half covered 63 yards in six plays including Whitford’s 25-yard touchdown strike to Burnett. The extra point tied it at 3:58 left in the third quarter, setting up the seesaw battled the rest of the way. 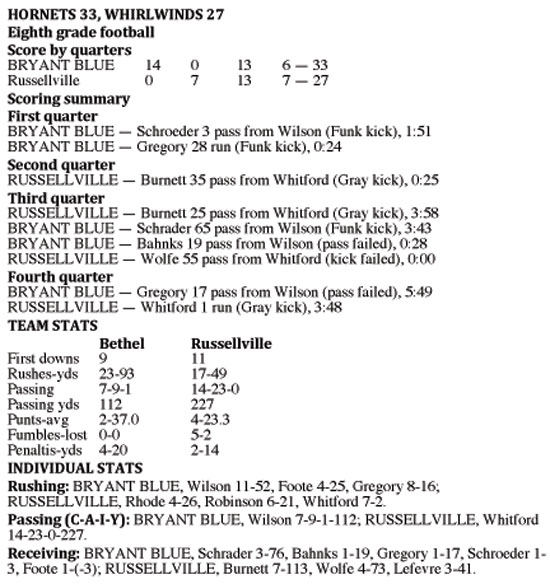