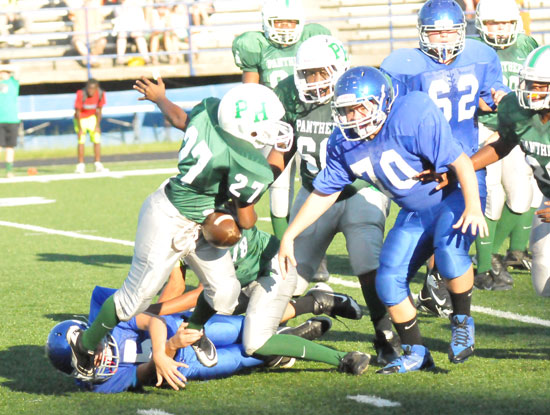 Randy Thomas, playing tailback at times and wide receiver at times, accounted for 220 yards of total offense and three touchdowns and the defense limited the Pulaski Heights Panthers to 55 yards as the Bryant Blue Hornets seventh grade team of Bethel Middle School rolled to a 28-0 win on Tuesday night at Bryant Stadium. 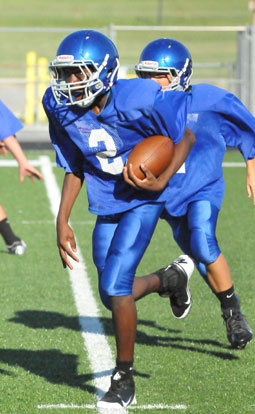 Randy Thomas skirts left end on his way to some of his 75 yards rushing. (Photo by Kevin Nagle)

“Wow!” he enthused. “Wow! We were very physical. I can’t say enough about how well we played on defense. We fly to the football.

“Randy Thomas runs like a gazelle,” he continued. “He has that long stride. It doesn’t look like he’s moving that fast but he’s moving pretty dang fast.”

Thomas picked up 75 yards and a touchdown on the ground on just four carries and caught four passes for 145 yards and two more scores. Quarterback Logan Chambers hit 4 of 5 passes and Tyler O’Neal rushed for 45 yards on six tries. Keethan Hudson picked up 39 yards and the final touchdown on three totes.

“Logan Chambers threw the ball really, really well,” Jones noted. “We’ve been working on that real hard the last six or seven days. He threw it really well. Then Tyler O’Neal on defense and at tailback some, he played really good. I was real proud of the effort. We played all 61 kids we have.”

Of Pulaski Heights’ net of 55 yards of offense, 41 of it came on the Panthers’ last possession when reserves had stepped in for Bethel. The drive reached the Bryant 29 with just over a minute left in the game.

“It was 28-0 there at the end and our first-string defense is begging to go back in because they’re so prideful they didn’t want them to score,” Jones related. “And we put them back in there for a play or two.”

That came after an exchange of turnovers. The reserves forced a fumble that Ben Brown was able to recover for the Hornets with 1:07 left. Moments later, however, Pulaski Heights got the ball back as Quintlyn Rogers recovered at the 9. The Bryant starters came back on defense and, on first down, O’Neal combined with Patrick Karp and Wyatt Hoyt tackled Nathan Garner for a loss. On the last play of the game, running back Seth Watson got down to the 4 but the shutout was preserved.

The Hornets scored on their first three possessions. Thomas had a 22 yard run that set up his 26-yard touchdown gallop with :11 left in the first quarter. On the conversion attempt, however, O’Neal was hauled down short.

Their second possession came after a 15-yard penalty undermined Pulaski Heights’ efforts on offense and Hudson made a stop for a loss. Bryant got the ball back at its own 44 and Chambers lofted a pass down the right side that Thomas ran under at the 30. He raced for the end zone to make it 12-0. His run for the two-point conversion was good. 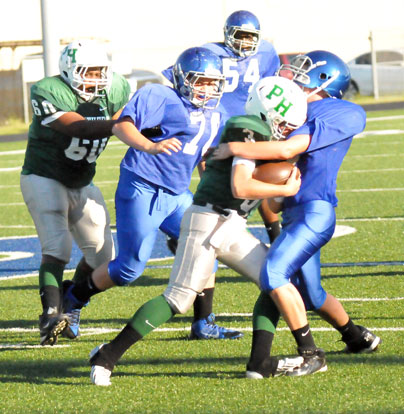 Will McEntire made a stop for a loss on the next series and the Panthers again went three and out. With possession at their own 37, the Hornets suffered a 12-yard loss on a bad snap that Chambers fell on at the 25. On the next play, however, he again hooked up with Thomas on a 75-yard touchdown pass. Thomas hauled in a Chambers throw on a slant pattern to add the two-point conversion.

O’Neal sacked Pulaski Heights quarterback Greyson Tackett to spoil a third-down play and the Hornets ran out the rest of the clock before halftime.

To start the second half, Bryant drove to the Panthers’ 16 with O’Neal contributing a 28-yard bolt but a fumble two plays later cost them possession as Nathan Burns recovered for the Panthers.

Watson picked up 8 yards on a second-down run to set up a third-and-1 at the 20 but the Panthers were denied a first down when Karp and Logan Reed dropped Watson for a loss.

With Jones filtering in reserves, the Hornets marched 43 yards in four plays to post the final score. Cody Conrad and Hudson each picked up 8 yards on consecutive tries. A fumble nearly derailed the march but Conrad covered it at the 33. On the next play, Hudson shot through a hole in the middle of the Pulaski Heights defense and rolled to the touchdown to make it 28-0.

The try for two was foiled when the Panthers’ Jack Foster intercepted Hunter Ulmer’s pass.

The Bethel team is set to play again next Tuesday against Bryant White. 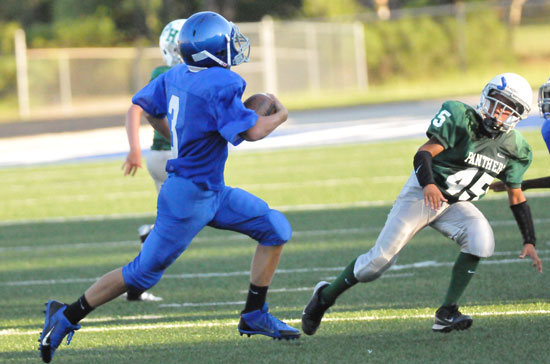 Tyler O’Neal (3) looks for room to get around Pulaski Heights’ Kaleb Farrell (45). (Photo by Kevin Nagle)