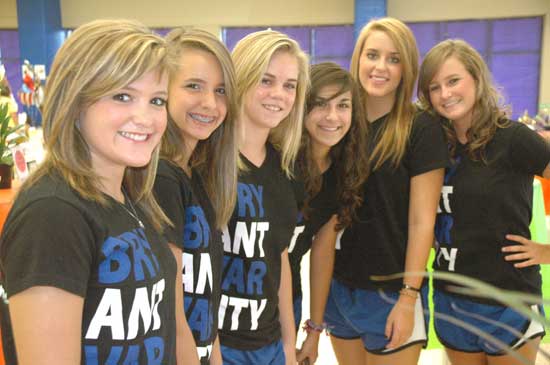 The Taste of Bryant Chamber of Commerce event on Thursday night wouldn't have gone so smoothly if it weren't for the help of the Bryant High School Dance team.[more]

The girls from the team volunteered their time to work on setting up the cafeteria to accommodate all the area food services that were invited to show off their products at the annual event that was sponsored by Everett GMC/Buick. Dance team members set up small tables around the room at which patrons could stand and eat, visit and socialize during the festivities. And they set up large tables for the food vendors who were in attendance, which aided the time factor in the overall setup. They had everything ready when the doors opened at 5:30 p.m. for the community.

"They are doing this for community service hours to raise money to go to a national competition in Orlando, Fla., in February," said Chamber of Commerce executive director Rae Ann Fields. "They worked very, very hard and it was a breeze with that many girls. What would take us a long time, they did it sooner."

More than 15 members of the Bryant Dance team participated in the community service and worked booths during the event serving tea and doing assorted duties.

"We are planning to go to the national dance team championships in Orlando and compete as a large varsity against teams from all over the nation," said dance team member Kelsey Rivers. "We have to raise money for our plane tickets and costumes, because we have a cap of $600 and that was for camp. We have to raise all the money for the rest of the trip."

The dance team has volunteered their services for the Special Olympics, the Arkansas Food Bank and several other organizations.

"We do as many as we can to help out," Rivers said.

The dance team members alternated throughout the day to get the set up complete for the Taste of Bryant through the main heat of the day. And, upon completion of their task, Fields commented on how perfect the room looked for the food vendors.