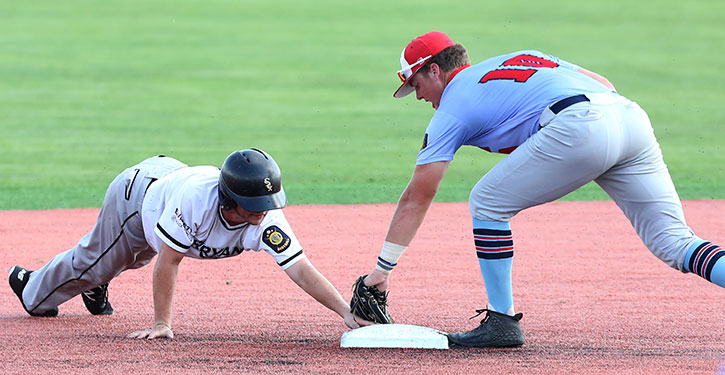 HASTINGS, Neb. — Even if it’s one run at a time, a team with an early lead usually has to tack on as a game proceeds if they’re going to hang on and win. The Bryant Black Sox did just that on Saturday in a tight elimination battle against Fremont, Neb., First State Bank, the champions of Nebraska, at the Mid-South American Legion Regional Tournament.

At first, Fremont was answering when the Sox scored but, a run in the fourth went unanswered and Bryant tacked on runs in the fifth and sixth then held on for a 5-4 win to advance to Sunday’s action.

Fremont finishes the season 35-11. Bryant, now 29-10, will play again at 1:30 on Sunday afternoon against Hastings, Neb., with the winner advancing to play for the championship against Festus, Mo.

Festus lost to Hastings, 5-4, late Saturday night but as the last unbeaten team, advances to the finals against the survivor between Bryant and Hastings.

The Black Sox have faced both teams in the tourney. Bryant opened the event with a 3-2 victory over Hastings then lost a heartbreaker 2-1 to Festus.

The winner of the tournament advances to the Legion World Series in Shelby, N.C. Bryant is hoping to make a return trip after playing there in 2017.

Will Hathcote, making his first start since the State championship game, picked up the victory on the mound with late help from Tyler Bates. Both were resilient, finding ways to get out of jams time after time.

Gage Stark, Noah Davis and Logan Grant each had two hits. Stark knocked in a pair and Grant drove home a key run to make it 5-3 in the top of the sixth.

The game was marked by aggressive base-running. The two teams combined to steal 13 bases, seven for Fremont including four by Austin Callahan who also slugged a solo homer.

The Sox took the initial lead in the top of the first. Logan Catton was hit by a pitch and Cade Drennan singled. With two out, Stark came through in the clutch with an RBI single to left.

In the bottom of the inning, Fremont’s Jackson Gilfry led off with a single. Hathcote fanned Eli Herink and got Callahan to ground into a force at second.

One strike away from getting out of the inning unscathed, the Bryant right-hander surrendered a single to left by Dillon Dix. On a 2-2 count to Mitchell Glause, Callahan stole third. He scored when the throw got through.

Dix wound up at third and Glause walked but Hathcote came back to strike out Nick Herink to send it to the second.

Bryant regained the upper hand in the third when Catton walked and stole second. With two out, Catton stole third then scored on a passed ball before Stark whacked another single.

Once again, Fremont tied it in the bottom of the inning. With one out, Callahan slugged his solo homer.

But Hathcote retired the next two batters to keep it tied.

In the top of the fourth, Davis led off with a single. With two down, he stole second then third, scoring on an errant throw from the Fremont catcher, Nick Herink.

Hathcote followed up by setting down the Nebraskans in order in the bottom of the fourth, finishing with a strikeout.

Logan Chambers opened the top of the fifth with an opposite-field double. After Catton was hit by a pitch, Drennan sacrificed the runners to second and third. Jake Wright was issued a free pass to load the bases and Fremont changed pitchers.

Eli Herink took over on the bump and surrendered a sacrifice fly to Stark to make it 4-2.

A one-out walk to Gilfry gave Fremont a chance to get that run back. Though Eli Herink grounded into a force at second, just beating the relay to first to keep the inning alive.

Herink stole second and went to third on an errant throw. He scored on a wild pitch to make it 4-3.

Callahan and Dix both walked as Fremont threatened to tie the game but, after they worked a double steal, Hathcote and Glause battled to a full count. Hathcote came through with a strikeout to preserve Bryant’s lead.

And the Sox tacked on one more in the top of the sixth. Davis led off with his second hit and stole second. Dillon sacrificed him to third and Grant delivered the RBI single to left to make it 5-3.

Coby Greiner followed with a grounder to third. Fremont got the force at second then Greiner was ruled out as well when the umpire’s cited Grant for interfering in the relay. Despite an extended appeal by Sox manager Darren Hurt, the play stood, and Fremont came to the plate in the bottom of the sixth, trailing by two.

With one out, Brody Sintek singled to right. Hathcote got Donnie Mueller to fly out to Stark in right. But a four-pitch walk to Dawson Glause kept the inning going.

Hathcote gave way to Bates, who walked Gilfry to load the bases. The count went to 3-2 on Eli Herink before he flew out to Greiner in center to send it to the seventh.

The Black Sox were retired in short order in the top of the inning. In the home half, Callahan reached on a third-strike wild pitch, taking second when Drennan scrambled after the ball and threw errantly to first. Callahan stole third and scored on a grounder to Chambers at short by Dix.

Mitchell Glause bounced out to Chambers as well then Bates faced Nick Herink. His first three pitches were balls but he rallied to throw three consecutive strikes for the final out.