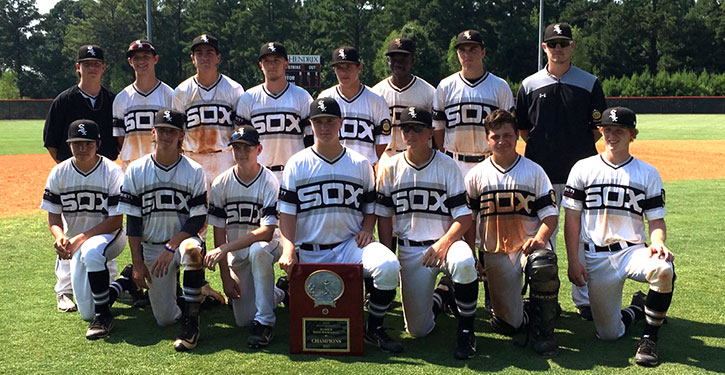 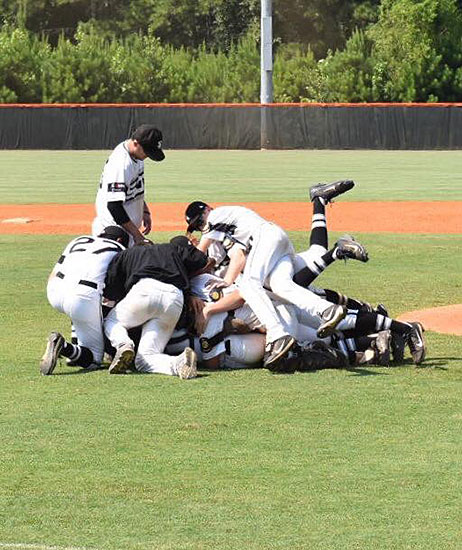 CONWAY — Somewhere along the line, perhaps at the start of the Area Junior American Legion Tournament in Bryant, the Bryant Black Sox Junior team broke through a barrier that both head coach Tyler Brown and Legion manager Darren Hurt had talked about. It had something to do with the will to win but it was more than will, it was a hunger for victory. They explained it like this:

They were the kind of team that would score four runs in the first inning and kind of relax. They’d rest on those four runs holding up instead of fighting just as much to add on, to take advantage of every opportunity to bury the opponent (if they could). At the very least, building insurance through a run here or a run there the rest of the game.

Turns out they got the message and rode it all the way to the Junior American Legion State championship, running through the State tournament undefeated including a 6-3 win in the title round over Texarkana, which was trying to force an “if” game Tuesday afternoon.

And, sure enough, the Sox scored four runs in the first. They didn’t rest on their proverbial laurels. They kept after it and added what proved to be tension-easing (but hardly tension dispelling) two runs in the bottom of the third after Texarkana had cut the 4-0 to 4-2.

Christian Harp, who pitched three innings for Bryant, and Coby Greiner, who shackled Texarkana for the next four, combined with enough Bryant defense (overcoming three errors) to nail it down. Only one of Texarkana’s three runs was earned.

The Sox made hay from five Texarkana miscues and four walks with seven hits on the way to the win. Ryan Lessenberry had a big day with two hits and three runs batted in. Jake Wright was on base three times and drove in a run. Logan Catton and Brayden Lester each had a hit and a walk along the way.

After Texarkana was set down in order in the top of the first, the Sox struck. An error opened the floodgate as Catton reached. He advanced to second on a wild pitch and, with one out, Wright ripped a single to left to chase him home with the first tally.

Harp reached on yet another Texarkana miscue that allowed Wright, who had taken second on the late throw to the plate, to sprint home.

With Jarod Yarborough in as a courtesy runner for the pitcher, Peyton Dillon lined a single to left and Cade Drennan got on via the third error of the inning. With the sacks filled, Lester hit a bouncer to short that resulted in a force on second to retire Drennan. But Yarborough was able to score, making it 3-0.

Lessenberry capped off the uprising with his first hit, an RBI single to center that plated Dillon.

Texarkana opened the second with a triple and a single to plate the lone earned run of the day. After another single, a sacrifice bunt attempt was foiled by Harp, who got after the ball, whirled and threw to Lester at third in time for a force.

But an error followed, allowing a second run to score. With a man at second and one out, Harp got the second out on a fly to Zion Collins in left and a grounder to Catton at second.

Despite a lead-off walk to Catton and a sacrifice by Greiner in the second, the Sox were prevented from adding on right away.

In the third, a two-out single and a walk gave Texarkana a chance but a grounder to Konnor Clontz at short resulted in a toss to Catton at the bag for a force that closed out the stanza.

And Bryant responded. With one out in the home third, Drennan yanked a single to left and Lester drilled a double, setting the table for Lessenberry who came through with a two-run single to right to make it 6-2.

Greiner took over on the mound and Texarkana was set down 1-2-3 in the fourth. In the fifth, Greiner hit a pair of batters and, when they tried a double steal with two down, an error allowed a run to score, cutting the lead to 6-3.

In the top of the sixth, Greiner fanned the first batter. A single followed but a fielder’s choice and another groundout, preserved the lead.

Catton beat out a bunt single to start the bottom of the sixth but, on Greiner’s sacrifice attempt, Texarkana got the out at first then caught Catton trying to sneak his way to third. Wright walked and stole a base but was stranded, setting up the tense top of the seventh.

A single gave Texarkana hope. After a force out on a grounder to Clontz and a fly to Lester in left, Bryant was within an out of the championship.

Greiner induced another ground ball but it was misplayed and Texarkana had the potential tying run coming to the plate. Greiner got ahead 0-2 then the batter fouled off three good pitches. A pair of deliveries off tantalizingly off the plate evened the count before the batter hit a grounder to Clontz at short who threw to Dillon at first for the final out as the Sox’ celebration commenced.