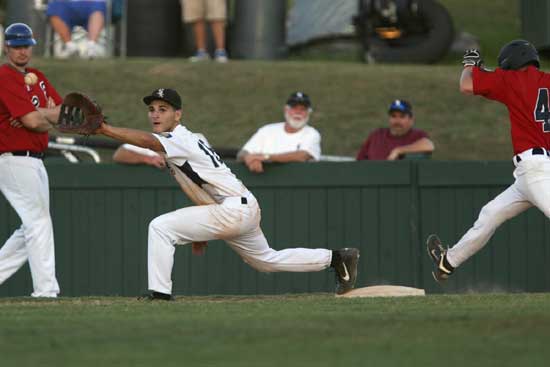 At this stage of the Senior American Legion season, no lead is safe. The teams that are[more] left can all hit well and, with every game going nine innings, sooner or later — often both — runs will be scored. 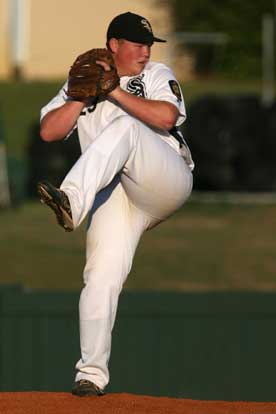 On Sunday, the Bryant Black Sox learned that lesson the hard way. After building a 7-2 lead against the Texarkana Razorbacks, the Sox scored just once over the last five innings. Texarakana whittled on the lead then overtook the Sox for a 10-8 win that secured a spot in the championship round of the Zone 4 Tournament as well one of the league’s two bids to State.

On Monday, the Sox built an 8-1 lead in the first inning against Pine Bluff Simmons in the loser’s bracket final and, sure enough, the Bankers gamely kept scoring, eventually matching those eight runs. But this time, the Sox kept adding on as well and ultimately extracted a 16-8 victory that punched their ticket to State and a chance to take on Texarkana for the Zone tourney title later in the evening.

The weary Simmons team had been playing earlier in the day — much earlier. Their elimination game against Hope on Sunday didn’t get over with until 1:30 a.m. Monday morning.

There were plenty of kudos to go around for the Sox who hammered out 23 hits in the game. Hunter Mayall went 5 for 6 with four runs batted in and Brady Butler, who has developed into the team’s ace on the mound, broke out with the bat (and some defense), socking a two-run homer and two doubles in his first three at-bats. Defensive whiz Ozzie Hurt lashed three hits and so did Tyler Nelson, who was seeing his first playing time for the Sox since June 25 when he began suffering back trouble during the team’s trip to Omaha, not only added three hits but pitched six innings. 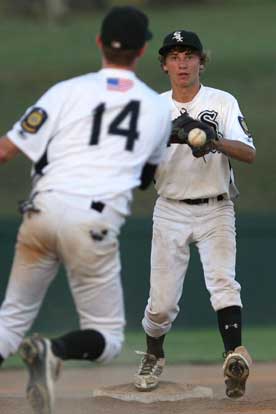 Speaking of pitching, with Bryant protecting a 13-7 lead and closer Dylan Cross resting a tender wing, Matt Neal came on in the seventh inning and put the shackles on the Pine Bluff batters, allowing just one run on two hits over the final three frames to earn a save.

“We came out and just smashed the ball,” acknowledged Sox manager Darren Hurt. “We hit the ball all over against a good pitcher.”

Pine Bluff had innings available from ace Josh Guy so he started the game.

“But he didn’t make it out of the first inning,” Hurt noted.

“I’m very proud of them,” the manager said of his team. “And I tell you, if we go to the State tournament and keep hitting the ball like we have been, we can beat anybody. There’s no doubt we’ve played the best teams. We’ve played a tough schedule, maybe the toughest out there. We’re going to be as tested as anybody. I think we’re ready for the big games.”

Pine Bluff took a 1-0 lead in the first but could’ve had more. Hunter Colson and Justin Dardenne opened the game with singles then a wild pitch allowed them to reach second and third. But Nelson steadied himself at that point and got Nick Hefley to ground out to second as Colson scored. Guy followed with a fly to Butler in right. Dardenne tagged up at third and headed home but Butler fired a strike to catcher B.J. Ellis to nail him for an inning-ending doubleplay. 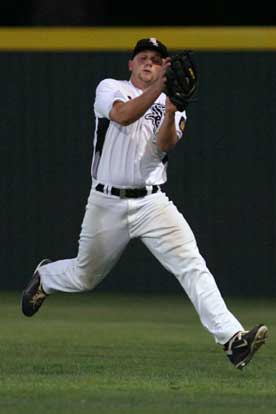 The Sox then jumped on Guy in the bottom of the frame for eight runs. Nelson started the blitz with a single hit and Tyler Brown slapped one as well. Jordan Taylor walked to load the bases then Mayall laced his first hit on a line to right to tie the game. Joiner shot a single to center to snap the tie as Brown and Taylor scored. And on the late throw to the plate, he and Mayall moved to second and third.

With Josh Pultro at the plate, Mayall tried to score on a pitch that got past the catcher but fell victim to the concrete backstop. The ball came back to Pine Bluff catcher Chris McVay who tossed to Guy covering the plate. He got the tag down in time to retire Mayall.

It was, however, the only out that Guy would get.

Pultro proceeded to double in Joiner then, on a 1-1 pitch, Butler blasted his homer to left-center to make it 6-0.

“His name just keeps popping up every time I talk (about the games),” Hurt said of Butler. “That’s because he just continues to step up no matter what I ask him to do.”

Will Jacobs came on to relieve for Simmons but he issued a walk to Ellis and, with two down, Nelson smacked one to the wall in left-center for an RBI triple. And, after Brown drew a walk, Jacobs gave way to Dardenne.

He too received a rude greeting when Taylor lined a single to left on his second delivery, making it 8-1. 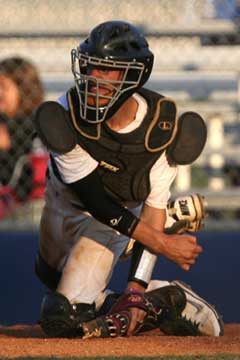 Simmons, however, began chipping away at the lead in the top of the second, scoring twice on a walk to Ryan Bowlin, a double by Scott Scifres and a single by Jacobs.

But Nelson worked a scoreless third, working around an infield hit by Guy. In turn, the Sox added on a run. Hurt opened the bottom of the third with a single to left-center. He was awarded second on a balk and third on a wild pitch. But Dardenne retired the next two batters and had a chance to escape unscathed. He hit Taylor, however, and, on the next pitch, Mayall came through with an RBI single to left to make it 9-3.

Simmons would take advantage of a couple of Bryant errors to plate two runs in the fourth. A two-out, two-run single by Dardenne made it 9-5 and put runners at first and second. But Nelson fanned Hefley to end the rally there.

Bryant answered in the bottom of the inning to maintain its advantage. Pultro singled and scored all the way from first on Butler’s double off the centerfield wall. Ellis sacrificed Butler to third then Hurt lined an RBI single over the second baseman’s head to make it 11-5. 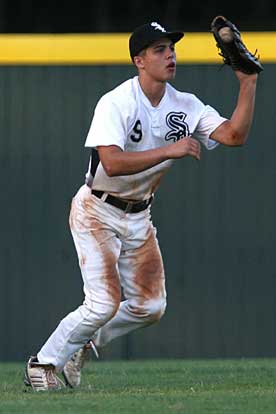 Neither team scored in the fifth with Nelson retiring the Bankers in order. In the sixth, Pine Bluff kept the pressure on with Colson drilling a two-out, two-run homer.

But, once again, the Sox responded. Ellis bounced a single in to left with one out, Nelson shot a single up the middle to send him to third and, after he stole second, both scored on Brown’s double into the leftfield corner to make it 13-7.

Neal relieved in the top of the seventh and struck out two to pitch around Guy’s one-out double. Dardenne surrendered a lead-off double to Mayall in the bottom of the inning and gave way to Colson who got through the inning.

But Neal worked a 1-2-3 eighth and the Sox put the finishing touches on their offensive output in the bottom of the inning. Hurt’s third single got things started with one out. Though he was forced at second on Nelson roller to the mound, Brown and Taylor walked to load the bases once again for Mayall who cracked a two-run single. Joiner’s base hit drove in the 16th run.

Neal issued his first walk to start the top of the ninth but then got a lift from Pultro in center. His diving grab robbed Dardenne of an extra-base hit. Brown then made a sparkling play at third to just nip Hefley at first on a play in which Colson hustled to third. Guy singled to bring in the run but Neal then got Bowlin to bounce to Taylor at short for a force that ended the game.