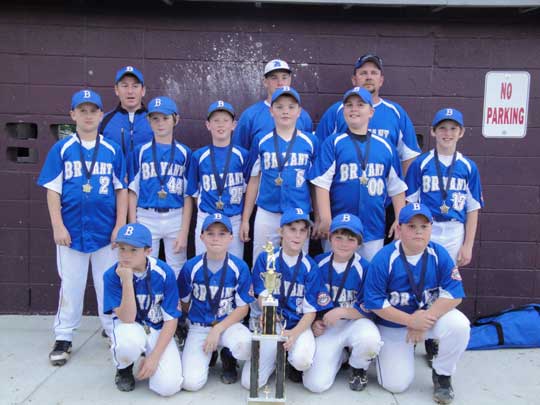 BENTON — The Bryant Hornets 10-and-under baseball team came back through the losers bracket to win the Battle in Benton tournament championship held from Friday, May 8 to Monday, May 10.

The team opened with a 21-0 win over a team called the Mets then suffered a 7-4 loss to the Aces on Saturday. In a rematch with the Mets of Sunday, Bryant won 15-0 to set up the finale, a 24-5 romp over the Arkadelphia 9ers.

In the finale, Kyzer and Schmidt each had four hits while Sandidge and Buck added two apiece as Bryant took advantage of 14 walks.

Arkadelphia broke out on top with a run in the bottom of the first and three in the home second.

Bryant then turned that 4-0 deficit into a 6-4 lead in the third. With two out, Dorsey got the uprising started with a single. Sandidge walked and Schmidt doubled in a run. Hunter Hilson was hit by a pitch to load the bases for Kyzer who drilled a double to plate two.

Hilson scored on a passed ball to tie it then Kyzer followed on another delivery that got past the catcher as Johnson drew a walk. He stole second and scored on a single by Wright.

Johnson, the Bryant starter on the mound, worked out of a two-on, one-out jam with a pair of strike outs in the bottom of the third and the Hornets went back to work in the fourth.

This time, Thompson instigated the uprising with a single. He stole second and took third on an error. With one out, Curtis singled him in to make it 7-4. A balk got Curtis to second then he stole third and, with two down, Sandidge started the hit parade with an RBI single. He swiped second and third then scored on Schmidt’s base hit. Another stolen base and an error got Schmidt to third and he scored on Hunter Hilson’s single to make it 10-4.

A hit by Kyzer and walks to Johnson and Wright force in a run before Arkadelphia could record the third out.

Johnson eased through a 1-2-3 home fourth and the onslaught revved up again in the fifth when Thompson walked and stole second, Buck singled him to third and swiped second and Curtis walked to load the bags. With one out, Sandidge cracked a double to chase home a pair. Schmidt then singled in two more to make it 15-4.

A solo homer by Arkadelphia in the bottom of the fifth trimmed a run off the margin but Bryant’s nine-run sixth blew the game up.

Kyzer started the inning with a double and ended it with another. In between, seven Bryant batters walked. Johnson doubled and Buck singled along the way.

In the first, Bryant took a 5-0 lead. Sandidge walked and scored on Schmidt’s triple. Hilson and Kyzer smacked back-to-back doubles then Johnson tripled to make it 4-0. He scored on a groundout by Wright.

In the second, Dorsey drilled a two-out triple and scored on a passed ball. Sandidge singled and raced home on Schmidt’s second three-bagger. Hilson singled him in ahead of another double by Kyzer, a triple by Johnson and an inning-capping RBI double by Wright to make it 11-0.

In the third, consecutive walks to Thompson, Buck, Curtis and Dorsey produced a run then Sandidge finished it by clearing the bases with a triple.

The Aces rallied for a run in the fourth to tie the game 4-4 then scored three in the fifth to upset the Hornets.

The Aces struck for two runs in the first. Bryant got on the board in the top of the second. Kyzer singled and advanced on an error, scoring on a double by Johnson. A grounder to second by Wright got Johnson to third but, after Thompson walked, both were stranded.

The Aces got the run back in the bottom of the inning to forge a 3-1 lead.

Bryant rallied in the third to take a 4-3 lead. Sandidge was hit by a pitch to start the uprising, Schmidt singled and Hilson sacrificed the runners to second and third for Kyzer who came through with a two-run double to tie it. He advanced to third on a passed ball and scored the go-ahead run on a single by Johnson.

After the Aces tied it in the bottom of the inning, Schmidt led off the fifth with a single. He stole second then third and, with two down, tried to score only to be tagged out to end the inning.

Buck and Curtis combined on a two-hit shutout and the Hornets got three hits from Schmidt include a two-run homer in the third. Hunter Hilson, Kyzer, Johnson, Thompson and Morales each had two hits.

Sandidge walked, stole second, took third on a passed ball and scored on a double by Schmidt in the first. Schmidt stole third and scored on Kyzer’s groundout.

The 2-0 lead ballooned to 8-0 in the second. Thompson singled with one out then walks to Buck, Curtis and Sandidge forced in a run. Schmidt grounded into a force at third that retired Curtis but Hunter Hilson singled in a run then Kyzer cleared the bases with a double. Johnson singled Kyzer in to cap the inning.

In a six-run third, Curtis singled and took second on an error. Sandidge reached on a third-strike wild pitch then worked a double steal that got Curtis home. Schmidt followed with his home run.

Hilson singled and stole second then scored on Kyzer’s double. Kyzer and Johnson both eventually scored on errors.

The Hornets finished off the win with a seven-run fourth that started and ended with singles by Morales. Curtis, Johnson and Schmidt had singles in the inning, Thompson doubled and Sandidge drilled a triple.

Hornets JV team finishes season with win over North Little Rock, 16-3-1 mark
Hornets will be No. 1 seed from Central at State tourney