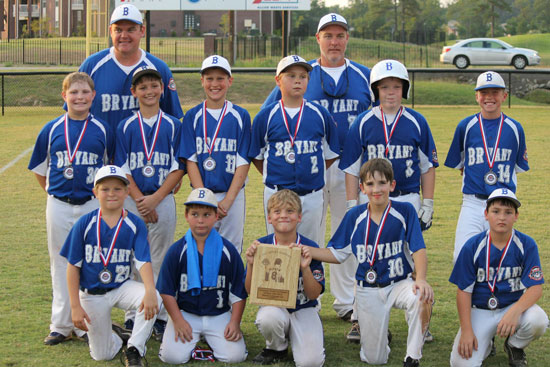 The Bryant Blue League 10-year-old All-Stars absorbed a first-round loss at District Tournament play at[more] Bishop Park but battled back through the loser’s bracket to reach the championship round. They forced a winner-take-all final by avenging their earlier loss to Benton, winning 5-3. But Benton won 10-4 to capture the District title.
Both teams will advance to the South Arkansas State Tournament in Lonoke starting July 6. 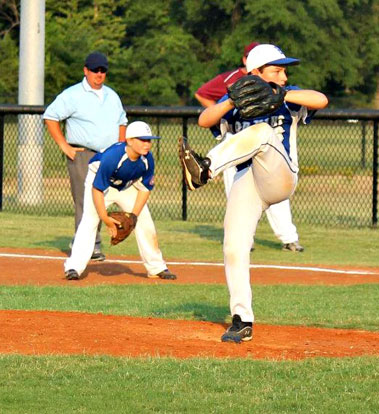 Bryant’s Stars were shutout without a hit over the first four innings while Benton built a 6-0 lead. A four-run rally in the fifth got Bryant back in the game but Benton put it away with four in the bottom of the inning. Bryant put a pair of baserunners on in the sixth when, with two out, Jordan singled and Trimble walked but both were stranded as Benton closed out the victory.

Benton scored four runs in the first and two in the third to establish the lead. Bryant’s first hit was a single by Jordan with one out in the fifth. Trimble bounced into a force at second but Lester ripped a double to put runners at second and third for Foster who singled both home the shatter the shutout. Hall followed with a shot for a triple to make it 6-3. He scored on a base hit by McKim before Benton was able to get out of the inning.

In what may have been the best game of the tournament, the two teams battled through three scoreless innings with Jordan pitching for Bryant. In the fourth, Benton eked out a run and held Bryant.

Benton upped the advantage to 3-0 with a pair of runs in the fifth. Foster relieved and got out of the inning, keeping his team in range for a rally. And they came through in the bottom of the fifth, scoring all five of their runs.

A one-out single by Trimble got things rolling. Lester was hit by a pitch and, with two down, Hall walked to fill the bags for McKim who came through with a two-run double. Prather’s two-bagger tied the game and when Harris ripped the third double of the inning, Bryant had a 5-3 advantage.

Foster struck out two as he retired the side in order in the top of the sixth to nail down the victory.

With five runs in the first and seven in the second, Bryant turned a 1-0 deficit into a blowout win in four innings. Foster and Lester combined to limit Pine Bluff North to one hit, a single to start the game. The run scored after the batter stole second and third and came in on passed ball.

After that Foster struck out five of the six batters he faced. Lester fanned three and walked two over the last two frames. 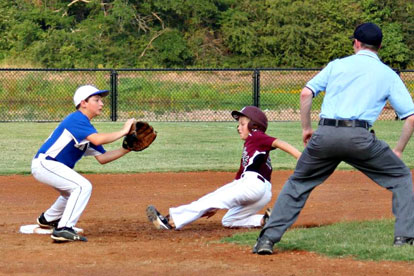 Bryant took advantage of the Pine Bluff pitcher’s struggle to find the strike zone, scoring the first five runs without a hit. The first five batters in the bottom of the opening inning waited out walks then Curtis was hit by a pitch to force in a run. After the first out was recorded, another walk to Jordan forced in a run. Trimble picked up an RBI with a groundout to make it 5-0.

In the second, walks to McKim and Harris started the next big inning. Curtis singled to drive both home then stole his way to third as Prather walked. The duo worked a double steal to get Curtis home then Jordan walked to set the stage for Trible’s two-run triple. Lester came through with a sacrifice fly to make it 11-1. Foster followed with a walk and a stolen base. He scored on a double by Hall.

Hot Springs Village North took a 2-0 lead in the top of the first only to have Bryant erupt for 13 in the bottom of the inning to take the mystery out of the final outcome. An eight-run second made it a totally lopsided victory.

The opening onslaught was fueled by walks initially. Foster walked, stole second and third then, after Hall walked, came home on the front end of a double steal. A walk to McKim brought up Prather whose shot to first was misplayed allowing two runs to score.

Prather wound up at third and came in on a single by Harris. Curtis walked and Jordan doubled in a run. Singles by Trimble and Lester followed before Hot Springs Village could record the second out of the inning. 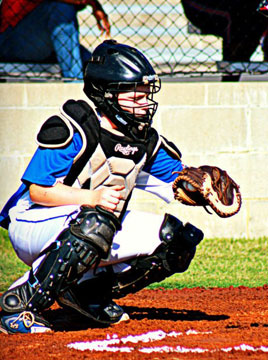 Hall drew another free pass then McKim slugged a home run to make it 11-2. Prather singled, Harris walked and Curtis cracked a two-run double to cap off the inning.

Hot Springs Village scored two more in the top of the second but that was again overshadowed by Bryant. After sending 18 batters to the plate in the first, Bryant sent 12 up in the second.

Lester drew a walk and Foster doubled. St. Clair was hit by a pitch to load the bags and McKim got another RBI with a walk. Prather doubled in a pair and, with one out, consecutive singles by Clendening, Jordan, Trimble and Lester made it 21-4.

McKim smacked his second homer of the game to start the bottom of the third. Singles by Clendening, Jordan and Trimble produced the final two runs.

A seven-run first put Bryant in the driver’s seat as they began their trek through the loser’s bracket. Prather went the distance on the mound allowing runs in the second, fourth and fifth. He finished by allowing six hits. He walked one and struck out six.

A three-run triple by McKim highlight the first-inning salvo. Lester had singled, Foster had walked and Hall had loaded the bases with a base hit to set the table for McKim. A walk to Prather was followed by an RBI single by Harris. Curtis was hit by a pitch then Prather stole home.

With two down, Lester walked and Foster drove in the final two runs of the inning with a single.

After Seabrook scored its first run in the top of the second, Bryant put up two more in the bottom half when Curtis connected on a two-run bomb following a two-out single by Harris.

In the fourth, Trimble singled and stole his way to third then scored on a groundout by Lester to make it 10-1.

With single runs in the fourth and the fifth, Seabrook trimmed the margin to 10-3 before Bryant put the game out of reach with four in the home fifth. Harris provided the crowning blow with a double after Trimble had walked, and Foster, Hall, McKim and Prather had singled.

In the opener on Friday, June 22, a four-run first put Benton in position for the win, though Bryant whittled on the advantage all the way to the end. In fact, the game ended with the potential tying runs on base.

The game was highlighted by Bryant pulling off a triple play to end Benton’s third inning. With the bases loaded, Hall snagged a pop, fired to Cook at third for the second out. Cook relayed to Prather at second to complete the play.

Bryant answered Benton’s uprising in the top of the first with a run in the bottom half on hits by Lester, Hall and McKim.

Benton added a run in the second but Bryant got two. Cook walked, stole second and, after Trimble walked, Foster came through with a two-run triple.

Benton countered with two in the top of the third before Bryant’s triple play. In the home third, Prather walked, Harris singled (but was thrown out trying to stretch it to a double) and Curtis picked up the RBI with a single.

Trimble walked to start the rally. With one out, Foster, Hall and McKim drew free passes for force in a run. A two-out walk to Harris brought home the second tally but Benton ended it there forcing Bryant to strand three.