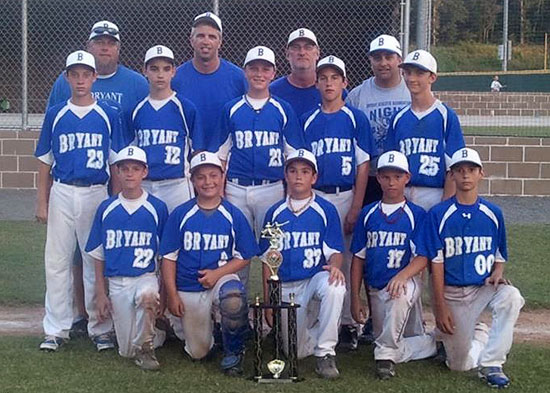 In the first game, McEntire allowed one hit and struck out seven as Bryant whipped Sylvan Hills again, this time by a score of 15-0. Bryant took control of the game in the bottom of the first with seven runs. Two hit batsman, a couple of walks and an error along with two ground outs and three wild pitches made the score 4-0 before Bryant collected its first hit, a single to left by Shepard which moved Greiner to second. Lessenberry then walked to load the bases. McEntire hit a liner that cleared the bases when the centerfielder attempted a diving catch but was unable to keep the ball in front of him.

In the second inning, Bryant tacked on seven more, taking advantage of two errors and a pair of hit batsmen and one walk to go with RBI singles from Chamber and Dupree. The final run came in the third when Mullings walked and scored on an error by the second baseman.

Sylvan Hills jumped out to a quick 4-0 lead in the first as four of the first five batters reached on three doubles and a walk against Chambers. With two outs an infield single plated a run.

After Bryant went 1-2-3 in their at-bat, Chambers settled in, allowing just two singles (with one runner being erased in a double play) over the next three innings. Bryant took over the game in the second smacking six hits and plating nine runs, with an RBI-single from Mullings, a two-run single by Shepard, and a two-run double by McEntire. Bryant made it 13-4 with four more in the third, thanks to hits from Greiner, Shepard, Lessenberry, Dupree and Grant.

Coppock relieved Chambers in the fourth and stuck out the side while allowing the final Sylvan Hill run on a couple of cheap singles and a double to left-center.

Grant took the hill for Bryant in the championship game and struck out seven in four innings. He started the game by fanning the first three batters, each one looking.

In the bottom of the first, Chambers led off and was hit by a pitch. Singles by Dupree, Grant and Coppock, a groundout by Mullings and an infield single by Catton made it 4-0 at the end of the first.

In the second, Grant allowed his only baserunner of the game when he was unable to find the bag while covering first on a grounder to Coppock. In the bottom of the inning, Bryant scored two more. McEntire led off with a walk and Chambers doubled to put two on. Grant’s grounder scored McEntire and Chambers came home on Coppock’s ground ball to second.

In the fourth, Bryant secured a 10-0 run-rule win by adding on four more. McEntire led off with a double to right-center, went to third on a wild pitch and scored on Chambers’ grounder to second. Singles by Dupree and Grant put two then Dupree scored on an error on Coppock’s ground ball to first. Mullings stroked a double to center to bring in Grant and then Catton singled to third to score Coppock and end the game.