BAY CITY, Texas — And they weren’t even supposed to be there.

The Bryant All-Stars, after watching a 9-3 lead disappear, scored three runs in the top of the sixth then held on for a 12-9 win over McComb, Miss., to capture the championship of the Babe Ruth 14-year-old Southwest Regional Tournament on Tuesday.

They will thus advance to the 2010 Babe Ruth World Series in Loudoun County, Va., to be held Aug. 21-28. There, they will open pool play against the host team on Saturday, Aug. 21, at 8 p.m. Their pool will also include the champions from the New England, Midwest Plains and Pacific Northwest Regional Tournaments.They become the second team from Bryant to clinch a World Series berth this summer. The Bryant 15’s will play in the World Series to be held in Monticello Aug. 20-27.

It's the first World Series appearance for this group of players.[more] 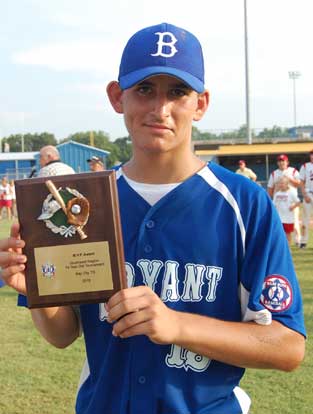 Ashton Green led the offensive outburst for Bryant going 3 for 5 with two home runs and five runs batted in. He was named the Tournament’s Outstanding Player, going 6 for 16 in the tournament with seven runs scored, eight knocked in, a double and two homers. He also pitched a complete game victory over Eagle Pass, Texas, in the winners bracket final on Monday.

The Stars were in a familiar spot on Tuesday. They were the last unbeaten team in a tournament and their championship opponent had to beat them twice to capture the title.

This time, McComb was the team that battled back through the losers bracket to gain the championship shot. But the third time proved to be the charm for Bryant which didn’t even get to the “if” game.

After holding its first three opponents to one run each at the tourney, winning with pitching and defense, the Bryant team out-slugged McComb. The Stars pounded out 14 hits including two each from Dale, Akers, Matthews, Tucker and Thompson. Six of the hits were doubles.

McComb had scored three times in the bottom of the fifth to tie the game 9-9. In the sixth, Matthews and Tucker drew walks and Rutherford was hit by a pitch to load the bases. With Matthews breaking from third, Thompson got a suicide squeeze bunt down that not only allowed Matthews to score but Tucker too, hustling in all the way from second as Thompson was thrown out at first. Green followed with an RBI double to make it 12-9. 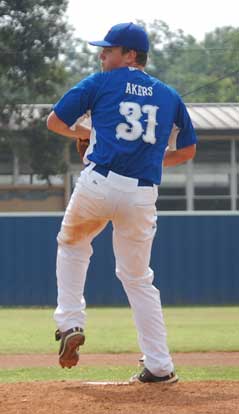 Akers, who gutted it out on the mound in a route-going performance, bore down after that. In the bottom of the sixth, Mike Jenkins singled. Moments later, however, he tried to steal second and Graddy, the Bryant catcher, threw him out.

A strikeout ended the inning and, in the seventh, Akers retired the side in order, finishing in style with his 11th strikeout.

On the very first pitch of the game, Green powered a drive over the fence in left field for his first homer. Dale followed with a single but was forced on a grounder back to the mound by Akers.

With two away, Graddy walked and Matthews drilled a triple to left field, making it 3-0. Tucker’s RBI single got Matthews home.

In the bottom of the inning, however, McComb scored three times on a pair of hits and a walk.

Thompson opened the second with a single to center, advanced on Green’s groundout and, with two down, Akers came through with an RBI double to make it 5-3.

After Akers worked a 1-2-3 home second, Bryant increased the margin. Matthews and Tucker led off with singles to center and, an out later, Thompson bunted in Matthews, beating out a base hit in the process. A pitch later, Green unloaded for a three-run shot to left to make it 9-3.

McComb changed pitchers and the new hurler surrendered another double to Akers but got out of the inning with no further damage.

The Mississippi champion whittled on the lead after that. Back-to-back doubles produced a run in the third. After Bryant was unable to capitalize on a walk and a hit batsman with two down in the top of the fourth, McComb scored two more on three hits to get within 9-6.

Bryant’s fifth included an infield hit by Dale and a two-out walk to Miller but no addition to the lead.

Taking advantage of a walk and an unsuccessful fielder’s choice with three hits, McComb rallied to tie it in the bottom of the fifth and had the go-ahead run at second when Akers got the final out on a pop to Green at short, setting up the answering outburst by Bryant.