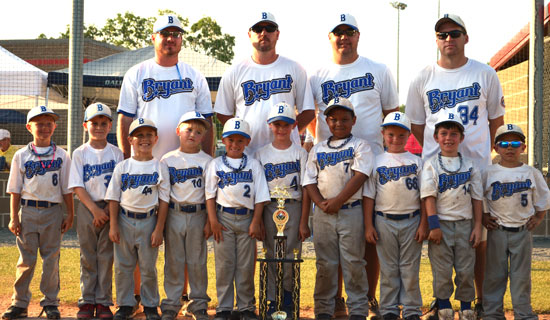 NORTH LITTLE ROCK — After absorbing a 14-8 loss in the opener of the 2013 Elite Gold Ring Classic at Burns[more] Park, a Bryant 6-and-under team fought back with five wins in a row to capture the tournament championship, turning the tables in the final on the Benton team that had beaten them in the opener by the same score.

Bryant bounced back after Saturday’s loss to bury Vilonia 21-5. On Sunday, a 15-0 win over Wynne put them in the semifinals against Sylvan Hills. After a wild 16-15 victory, Bryant advanced to win the final against Benton.

Bryant struck for the maximum six runs in the second inning to snap a 5-5 tie and take control of the title game, tacking on a run in the third and two in the fourth.

The game-turning uprising began with singles from Heidelberg, Speer, McCoy and Thomason, which plated two runs. Though Thomason was thrown out trying to get to second, Davis followed with a base hit and, with two down, so did Schroeder. A triple by Chism cleared the bases and when Allen singled him in it was 11-5.

The opening salvo took off when McCoy drilled a double. Heidelberg had singled but was forced at second on a grounder to third by Speer. Following McCoy’s two-bagger, singles by Thomason and Davis produced runs. Brown bounced into a force at second but doubles by Schroeder and Chism got things revved up again. Allen singled in Schroeder to make it 5-0.

Hits by Speer, McCoy and Thomason produced Bryant’s run in the third. Benton answered with a run then Bryant plated a pair in the fourth. Schroeder singled with one out but was forced at second on a grounder to short by Chism. Allen, however, cracked a single and Martin belted a two-run double to make it 14-6.

Benton scored two in the bottom of the fourth, too little too late.

The key inning in the semifinal game was the third. Bryant trailed 12-7 going in as Sylvan Hills had maxed out both of the first two frames. Bryant scored six in the top of the third to gain the upper hand then held Sylvan Hills scoreless in the bottom of the inning.

Bryant tacked on three in the fourth to make it 16-12 then held on as Sylvan Hills rallied in the bottom of the fifth. Three runs scored and the potential tying and winning run were on base with one out before a pair of infield pops were hauled in by Thomason to end the game.

Bryant grabbed a 5-0 lead in the first. Heidelberg, Thomason and Brown each doubled around singles from Speer and Davis. Schroeder and Allen had singles that chased Brown home with the final tally of the inning.

After Sylvan Hills scored its first six in the bottom of the inning, Bryant regained the edge with a two-run second. Heidelberg, Speer, McCoy and Brown had singles in the inning.

But once again Sylvan Hills scored six in the bottom of the second to pull ahead.

Bryant’s tale-tell third started with hits from Chism, Allen and Martin. Heidelberg popped out then Martin was picked off first. But Speer bashed a double, McCoy singled and Thomason cracked a triple to make it 12-11. Davis singled in the tying run and, off singles by Brown and Schroeder came around to score the go-ahead marker.

Sylvan Hills managed just one baserunner in the bottom of the inning and Bryant went back to work at the plate. Chism singled but was forced at second on Allen’s grounder to third. Martin then came through with a double and, after Heidelberg singled him in, Speer’s two-bagger knocked in the final run.

Sylvan Hills again failed to scratch in the fourth but, in the top of the fifth, Bryant was held down for the only time in the game, setting up the dramatic finish.

Making quick work of Wynne, Bryant scored six in the first, six in the second and added three in the bottom of the third to put it out of reach.

Speer ripped a two-run homer to start the scoring in the first. Heidelberg, who had led off with a single, scored on the blast.

McCoy, Thomason and Davis each singled ahead of Brown’s double and a two-run triple from Schroeder to complete the inning.

Chism and Martin doubled on either side of a single by Allen to start the second. Heidelberg and Speer ripped doubles before McCoy unloaded on a two-run homer to make it 12-0.

Davis tripled in a run in the third after Thomason had singled. Brown added a base hit and, after he was forced at second on Schroeder’s grounder to short, consecutive hits by Chism, Allen and Martin sewed it up.

A six-run second broke open a 3-3 tie as the Bryant team outscored Vilonia 18-2 over the final three frames.

The first three runs of the game came as a result of Heidelberg’s double, McCoy’s triple and singles from Thomason and Davis.

The first max inning began with a single by Allen. Martin, Fischer, Heidelberg and Speer ripped consecutive doubles and Thomason legged out an inside-the-park homer.

Davis singled and scored on Schroeder’s triple in the third. Chism singled in a run then the double barrage began again with Allen, Martin and Fischer coming through with consecutive two-baggers. Heidelberg made it 15-4 with his base hit.

Speer tripled to lead off the fourth and McCoy slugged a two-run homer. Hits by Thomason, Davis, Schroeder, Allen (another double) and Martin capped off the scoring.

Vilonia managed a run in the bottom of the inning but it wasn’t enough to keep their hopes alive for a comeback.

Bryant had a chance to match that six and stay alive in the top of the fifth but was held to a two-out single by Allen.

The early lead for Bryant was the result of a three-run first and a two-run third after Benton had pulled even at 3-3. Bryant’s first included singles by Heidelberg, Speer, Thomason and Schroder along with a double from McCoy.

In the third, Speer doubled and McCoy, Thomason and Davis followed with singles.

Bryant tied it in the top of the fourth when Allen and Martin singled, moved up on a grounder by Fischer and scored on a triple by Speer with two down. McCoy singled him in.