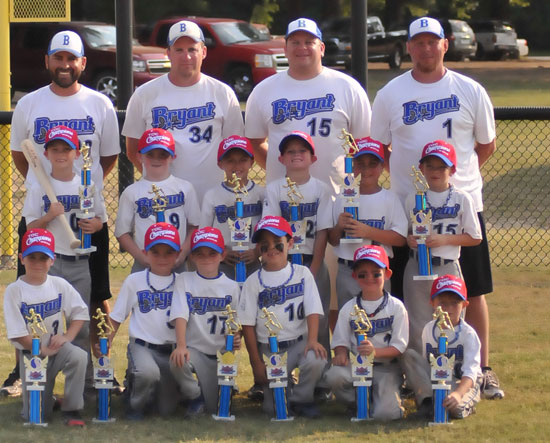 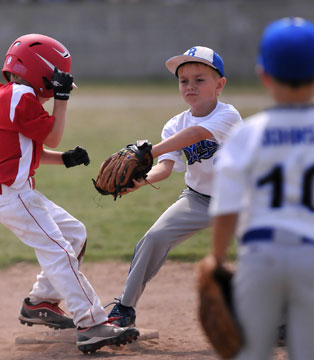 In the finals, the Bryant team defeated the rival Texarkana Vipers in a rematch of the championship game the previous week in a tourney at Lake Hamilton. This time, Bryant prevailed 15-8.

The semifinal match was against the Texarkana Razorbacks, a team Bryant has played in four championship games over the spring. In a tremendous defensive game, Bryant won 6-4.

In the first game of bracket play, the Bryant 6’s were challenged by the Bryant 5-year-old team. The 6’s advanced with a 21-5 win. 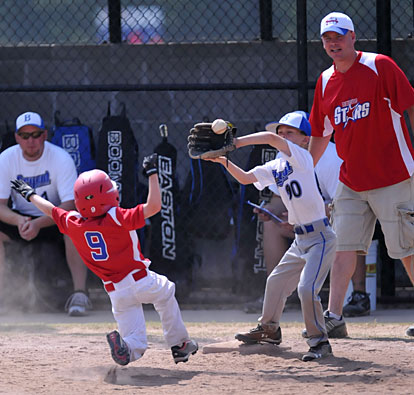 Carson Kemp was named the MVP of the 6-and-under Division.

Bryant’s first was keyed by a triple by Catton. It came after Hunt singled, Nagle doubled and Kemp drove in a run with a base hit. With the game tied 3-3, Hill cracked a two-out RBI single to put Bryant ahead.

After Texarkana regained the edge, Bryant’s game-turning uprising started with consecutive singles by McClellan, Palmer, Speer, Schroeder and Johnson. Hunt grounded into a force at second but picked up an RBI. Nagle singled and, with two down, Catton cleared the bases with another triple, making it 10-6. 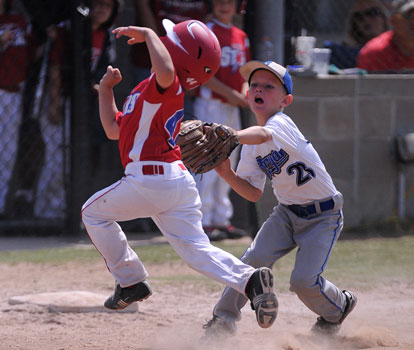 Bryant held the Vipers to one run in the top of the third and got that back in the home half on hits by Crawford, McClellan and Palmer.

Texarkana trimmed a run off the lead in the top of the fourth, making it 11-8 then Bryant put the game away in the bottom of the inning. Nagle singled but was forced at second on a grounder to Kemp. Catton, Hill, Crawford and McClellan singled before Palmer doubled.

Bryant’s first-inning uprising began with a one-out single by Hunt. Nagle, Kemp and Catton began with consecutive doubles to make it 3-0. 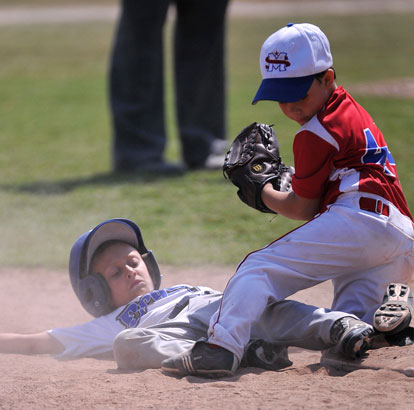 The Razorbacks trimmed a run off the lead in the second and, after holding Bryant in the bottom of the inning, made it 3-2 with another run in the third.

Bryant got a runner to third in the bottom of the inning but Texarkana escaped with the lead still just one run.

In the fourth, the Razorbacks just sent four batters to the plate and could not score before Bryant retired the side, setting up the clinching outburst in the bottom of the inning.

Stovall doubled to get the inning started. Hill singled then Crawford chased both home with a triple. McClellan’s single made it 6-2.

Texarkana opened the fifth with a pair of hits to get to the top of the lineup. A groundout to first was followed by a hit that drove in both runs but when the batter tried to stretch the single to a double, he was thrown out at second. The game ended moments later on a flyout.

The Bryant 6’s scored the maximum of seven runs in all three innings to advance past the Bryant 5’s, who got three of their runs in the first and two more in the bottom of the third. 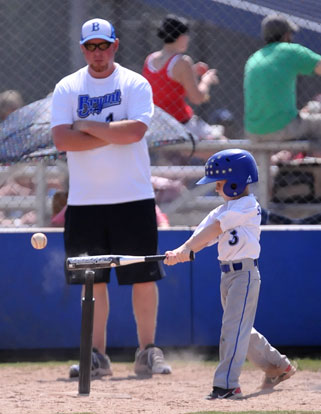 The opening salvo by the Bryant 6’s was instigated by Johnson, Hunt and Nagle cracking singles. Kemp doubled then so did Catton who was thrown out trying to stretch to a triple.

But Stovall hit a triple to keep the inning going and, after Hill and Crawford singled, McClellan ripped a three-bagger.

In the second, Palmer, Johnson and Hunt had hits ahead of Nagle’s triple. With one out, Catton, Stovall, Hill, Crawford and McClellan cracked consecutive doubles to make it 14-3.

Palmer started the third with a double and Johnson followed with another two-bagger. Hunt singled ahead of another double by Nagle. Base hits from Kemp, Catton, Hill and Crawford maxed out the inning.

Bryant gradually built a lead of 8-3 over the first three innings before blowing the game out with seven in the top of the fourth. Cabot rallied for four in the bottom of the inning but it wasn’t enough to stay alive with the seven-run maximum. 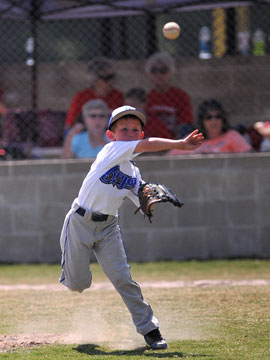 A three-run first put Bryant on top to stay. Doubles by Johnson and Hunt produced the first run and, with two out, consecutive singles by Catton, Stovall and Hill got the other two runs in.

Cabot scored twice in the bottom of the inning but Bryant got those runs back in the top of the second. Palmer and Speer had singles to start the inning. With one out, Johnson drove in run. With two down, Hunt’s base hit made it 5-2.

Bryant retired two Cabot players on the bases including one at the plate to keep Chaos off the board in the home second. Bryant countered with three in the top of the third. Kemp opened the inning with a single then Catton had a hit, though he was thrown out trying to make it a double. Stovall doubled, Hill singled and Crawford doubled to make it 8-2.

The Chaos was limited to one run in the bottom of the inning, setting up Bryant’s game-breaking fourth. Schroeder doubled to begin the onslaught. Johnson and Nagle had singles then, with two out, Bryant banged out five straight hits including a double by Crawford to max out the inning.

Cabot’s four run in the bottom of the inning was not enough to get the game to the fifth.

In three innings, Bryant made just two outs, scoring seven in each frame to bury Maumelle in the tourney opener.

The first inning was highlighted by triples from Hunt and Stovall. Kemp, Catton and Palmer had doubles.

In the second, Speer singled but was forced at second on a grounder to third by Schroeder. That was the first out of the game for Bryant. Johnson followed with a single then Hunt popped out. It was all hits after that. Nagle tripled and Kemp doubled. Singles by Catton and Stovall and doubles by Hill and Crawford finished out the frame.

Palmer, Speer, Schroeder, Johnson and Hunt each had singles to start the third then Nagle smacked a triple. Kemp’s double, Catton’s single and a final two-bagger by Stovall completed the romp.