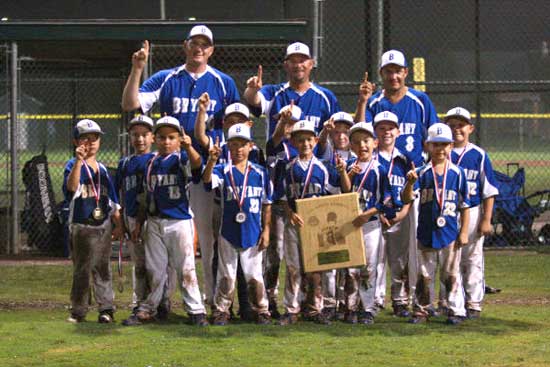 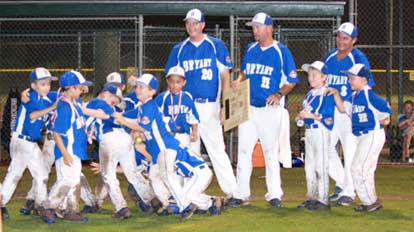 In the championship game, Bryant fell behind 2-0 in the top of the first then took the lead for good in the bottom of the inning. McDonald and Dreher singled then Parker picked up an RBI with a groundout. Thompson singled to tie the game then took second on a base hit by Barrett. Greiner’s grounder to first resulted in a force at third but Martin beat out an infield hit and Seelinger cracked a two-run single to center to give Bryant its 4-2 advantage.

Neither team scored in the second and Orange Grove came up empty in the third, giving Bryant a chance to extend the lead in the home half of the inning. Consecutive singles by Dreher, Parker and Thompson produced two runs. Barrett bounced into a force at second but he scored the third run of the inning on a base hit by Greiner, making it 7-2.

The Texas team eked out a run in the top of the fourth then Bryant blew the game open with a five-run outburst.

Highfill opened the uprising with a single but was forced at second on a grounder to short by Morrow. McDonald’s hit brought Morrow around then Dreher plugged the gap in right-center for a double to set the table for Parker who found the gap in left-center for a two-run double.

Thompson singled in Parker and, after stealing his way to third, came home on a base hit by Barrett.

Orange Grove rallied for three runs in the top of the fifth to keep its faint hopes for a comeback alive but the game concluded when Bryant put it out of reach in the bottom of the inning. Hits by Seelinger, White and Hatman loaded the bases. Orange Grove fended off the end by nabbing both Seelinger and White at the plate on consecutive taps to the mound by Highfill and Morrow before McDonald singled in Hatman to finish it.

Bryant ended Junior Deputy’s hopes by staking out an early 3-0 lead then holding on when the Little Rock team pushed across two runs in the fifth inning.

It was a defensive gem of a game as both teams made play after play.

Bryant managed a run in the first. McDonald singled but was forced at second on Dreher’s grounder to short. Parker’s base hit sent Dreher to second but then he was forced out at third on Thompson’s grounder. But Barrett singled to center and Parker came around to score.

In the second, Martin beat out an infield hit and advanced on Seelinger’s grounder to third. White then knocked in the run with a base hit and, after moving up on Hatman’s infield out, Highfill slapped a single to right to chase him home with the third run.

Bryant threatened to add to the lead in the fourth when Dreher, Thompson and Barrett had hits but Junior Deputy worked out of the mess.

Meanwhile, Little Rock only managed to get a runner as far as second once over the first four innings. In the field, two runs were in and a runner was at first but he was thrown out trying to steal for the second out of the inning then Bryant retired the next batter to close out the victory.