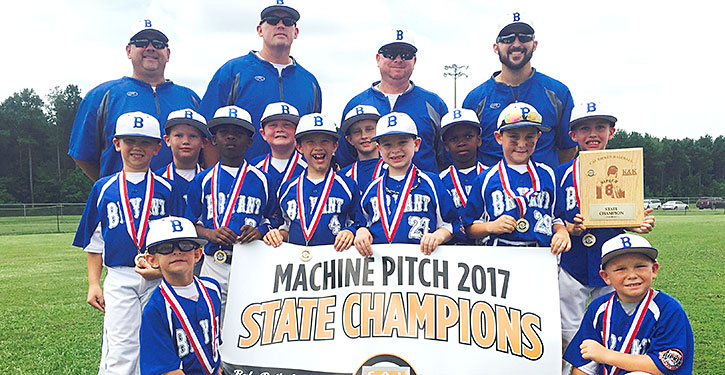 A day after the two teams played into extra innings before Bryant rallied for a dramatic 2-1 win, Bryant made quick work of Sylvan Hills in just four innings behind plenty of hitting and lots of good defense.

Bryant will advance to the Regional Tournament in Picayune, Miss., starting July 13.

Bryant scored the maximum of six runs in the first inning to set the tone. Kelley led off with an infield hit and Thomason did the same, setting the stage for Abrahamson’s double to left that drove in Kelley. Hunter singled in Thomason and Abrahamson scored when an errant throw was made on the play. Hunter scrambled home when Brown grounded out, making it 4-0.

Hyder started the offense again with an infield hit. Markham and Evan Hill followed with base hits as Hyder scored. With two down and runners at second and third, Garrett Hill got a bunt down and beat it out for a hit as Markham scored to cap the inning.

Sylvan Hills managed a pair of base-runners in the bottom of the first but Bryant got a force at second on a grounder to Thomason at second. The second out came on strikes then A grounder to Kelley at short ended the inning.

After Sylvan Hills grounded out three times around a two-out single, Bryant commenced to score some more in the top of the third. Hits by Hyder and Markham were followed by a bunt from Evan Hill. He reached safely and when the Sylvan Hills pitcher threw the ball away, Hyder scored and Markham made it to third. He scored moments later when Clary grounded into a force at second.

Garrett Hill singled and, after Drake bounced out, Kelley blooped a single to center to plate two, making it 14-0.

A strikeout followed by grounders to Abrahamson at first and Hyder on the mound made quick work of Sylvan Hills in the bottom of the third. But when Bryant was held scoreless in the top of the fourth, Sylvan Hills still had a chance, however unlikely, of a comeback.

In the bottom of the fourth, Thomason caught a pop up and Hyder fielded a grounder for the first two outs. A pair of hits followed before a grounder to Kelley at short for a force at second ended the game.