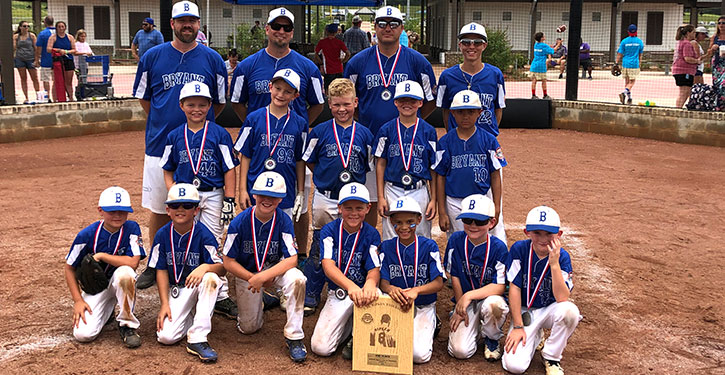 Bryant 8’s reach title game, edged out by Fairhope, Ala.

DAPHNE, Ala. — With a 12-9 win over the host Daphne All-Stars, the Bryant All-Stars earned a shot at the championship of the 2019 Cal Ripken 8U Regional Tournament on Sunday against the Fairhope, Ala., A team.

And it was a barnburner.

In the battle for the title, Bryant held a 6-4 lead going into the final inning, but Fairhope rallied for three runs in the bottom of the fifth to walk-off with a 7-6 victory.

Bryant took a 1-0 lead in the top of the first. Lloyd doubled and, with two out, Robertson singled him home.

They made a bid to get more when Verdell singled but Jackson ground into a force at third to end the inning.

Fairhope was unable to score in the first two innings and, in the third, Bryant pushed the advantage to 6-0. With one out, Summers and Lloyd singled. Martin grounded into a force at second then Robertson reached base. Verdell and Jackson singled to set the stage for Atkins’ triple.

In the bottom of the inning, Fairhope scored four runs to get back in the game.

Though they both threatened, neither team scored in the fourth. In the fifth, Robertson belted a two-out double to left and Verdell singled to left but both were stranded.

In turn, Fairhope managed a one-out single but nothing else. So, the game went to the sixth with Bryant in the lead. With one out in the top of the inning, McCrary singled to left but, with two out, he was forced at second.

But the first four Fairhope batters got on base, tying the game at 6. The final run scored as Bryant got the first out and the game was over.

Over the first two innings, Bryant built an 8-0 lead. In the third, Daphne cut that to 8-6. But the Alabama team could get no closer in the fourth and Bryant tacked on two in the bottom of the inning. In the fifth, Bryant got a run home to make it 12-6.

Daphne started a comeback in the top of the sixth. Three scored and another runner was on base before the final out came as Bryant held on for the win.

In the first, Lloyd singled to left with one out then Martin plugged the gap in right-center for a triple. Verdell singled him in to make it 2-0.

In the second, Atkins got things revved up with a single then McCrary belted one down the left-field line that went for a homer and a 4-0 advantage. McPherson and Young followed with base hits and Summers doubled. Lloyd’s single, Robertson’s double and a base hit by Verdell made it 8-0.

After Daphne got six in the top of the third, Bryant’s fourth began with a single by Summers. He was forced at second on a grounder by Lloyd but consecutive singles by Martin, Thompson and Verdell made it 10-6.

In the fifth, Rue doubled and scored, setting up Daphne’s comeback, which fell short in the top of the sixth.