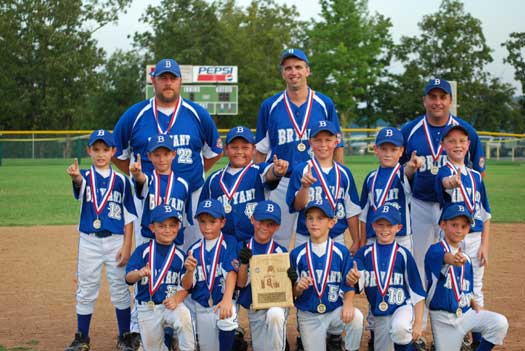 The Bryant 8-year-old All-Stars overcame their struggles at the plate and made a gritty comeback with three runs in the final inning to steal a 3-2 win over the Sylvan Hills Bombers in the finals of the state tournament on Wednesday night. Sylvan Hills had lost their first game in the tournament by a 3-1 score to Hamburg and then won nine straight games in the loser’s bracket to reach the championship game. Hamburg finished third.

The Bryant 8s and the Bombers had previously met in the finals of a Father’s Day tournament back on June 21, with Bryant rallying from a 15-9 deficit in the fifth inning to win a wild 16-15 slugfest by scoring two runs in the bottom of the sixth. But right from the start, it was obvious that in this championship game that runs were going to be scarce as both team demonstrated excellent defense.[more]

The Bombers leadoff batter rapped a clean single to right field but was thrown out at first by right fielder Will McEntire who charged the ball and threw to first baseman Nathan McFarland. The play helped prevent a Sylvan Hills rally as the next batter singled to center and the Bombers eventually left a runner on base to end the top of the first. Bryant went quietly in their half of inning, wasting a single by Logan Chambers.

Sylvan Hills broke out on top with a 1-0 lead in the second as they collected back-to-back singles to start the inning, with both runners advancing on steals and the lead runner then scoring on a ground ball to McFarland at first. Bryant again failed to score, stranding Logan Grant who had singled with one out.

The Bombers threatened to score in the top of the third as they had runners on second and third with two outs but the All-Stars escaped as the Sylvan Hills number two batter grounded out to second baseman Triston Day. Bryant went 1-2-3 in their half of the frame, with the first out coming on a fine defensive play by Sylvan Hills second baseman Chaz Poppy who drove to his right and speared a hard line drive off the bat of Coby Greiner.

In the fourth, Sylvan Hills collected a single with two outs and the next batter bunted and reached first safely, but the runner from first rounded the second base bag heading to third and was tagged out in a rundown that went from first baseman McFarland to third baseman Grant to shortstop Chambers. However, Bryant again could not push a run across despite a one-out single by Day.

Sylvan Hills picked up a run in the fifth inning. Their first batter reached on a single that fell in front of McEntire in right field, advanced to second on a ground ball to the pitcher, and then scored on a single to center. Bryant had the middle of the order coming up in the bottom of the frame but failed to get a runner on and entered the final inning trailing 2-0.

In the top of the sixth, the Bombers second batter reached on a single to center and advanced to second on a throwing error by outfielder Greiner and then to third on a grounder to pitcher Cade Dupree. He was left stranded as Chamber hauled in a popup to end the inning.

After having only four runner reach base in the first five innings, with none of them advancing past second, things looked grim for the All-Stars entering their final at-bat. However, Garett Nguyen started off the inning with a hard ground ball in the hole between second and third and beat out an infield hit by a step. Jake Cowell followed with a solid line drive single to left field which advanced Nguyen to second base. Greiner then advanced both runners with an excellent sacrifice bunt. Logan Catton followed with single just over the head of the second baseman that scored Nguyen with Bryant's first run of the game and moved the tying run to third. After two failed bunt attempts, Ryan Lessenberry struck out to bring the Bombers to within one out of a victory. Sawyer Holt stepped to the plate and hit a ground ball toward the Sylvan Hill first baseman as Catton broke in front of him heading for second base. The ball appeared to take a bad hop and then skipped past the first baseman as Cowell scored to tie the game, with Catton advancing all the way to third and Holt safe at first. The Bombers manager argued briefly that the ball hit Catton's foot and that he should be out, ending the game with Sylvan Hill as a 2-1 winner. However, the umpire ruled that the ball was not touched and Day marched to the plate with the winning run on third base. Day, the fastest player on the team and the team's leading hitter during the tournament (15 for 20), chopped the first pitch for a swinging bunt that went halfway to the mound and then used his speed to beat the pitcher's throw to first by a step. Seeing the throw go to first, Catton streaked for the plate and beat the first baseman's return throw by a step to score the winning run.

Bryant advanced through the 51-team tournament with a 7-0 record and outscored their opponents by a combined score of 76-12.

Next up for the All-Stars is the regional tournament in Lake Village, Arkansas, which begins on Friday, July 31.