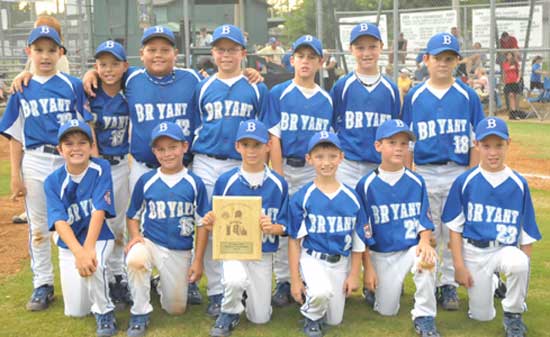 The Bryant 9-year-old All-Star team wrapped up the District Championship with a well-played 6-2 victory over arch rival Benton on Tuesday, June 29, at Ashley Park. 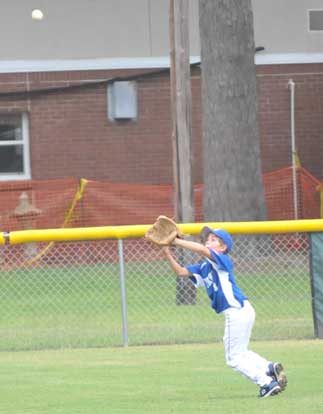 Bryant batted first and immediately put two runs on the scoreboard. Catton led off with a two-strike pop single over the first baseman that landed just inside the foul line. Chambers batted next and quickly fell behind 0-2 before taking four straight balls to draw a walk. Each runner moved up a base on a wild pitch before McFarland popped to short for the first out. With Dupree at the plate, Catton scored on a wild pitch while Chambers took third. Dupree then lofted a fly ball single to center on a 1-2 pitch that scored Chambers. Cowell struck out and Greiner, with two strikes, blooped a single to right to put runners at first and second. Lessenberry was next and, although he grounded out to second to end the inning, he had a nine-pitch at-bat which raised the Benton pitcher’s total to 39 for the opening inning.

In the bottom of the first, Benton’s first two batters grounded out to Greiner at second. The next batter made a bid for extra bases but Catton made a nice running catch in left-center for the third out. 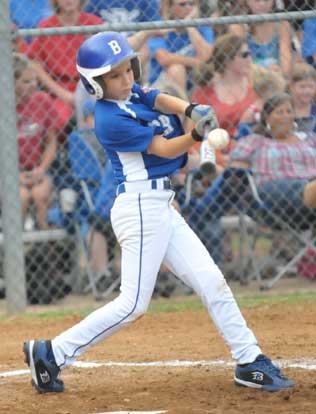 Bryant pushed their lead to 3-0 in the top of the second. With one out, McEntire was hit by a pitch. He moved to second on a wild pitch and then third on Catton’s ground out to the third baseman. Chambers then came up with a two-out double to left that plated McEntire.

In the bottom of the second, Benton scored both of their runs and cut the gap to 3-2 but missed an excellent opportunity to tie the game. The first batter walked and a single moved him to third, with the batter taking second. The next batter hit a pop in front of the second base bag, which Grant dropped allowing the runner on third to score, the runner on second moved to third, and the batter to reach second. Third baseman Dupree threw out the next batter at first for the first out of the inning but the runner form third scored on the throw. With two outs and a runner on third, the next batter hit a sharp grounder to the left of the mound. Pitcher Chambers made a diving stop, which froze the runner on third. His throw to first retired the batter and McFarland’s throw to plate completed a double play as Lessenberry blocked the plate and applied the tag. 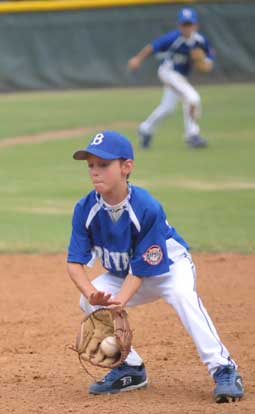 The All-Stars answered right away and got both runs back in the third. Cowell walked and Taylor ran for him and scooted to second on a wild pitch. After Greiner popped out, Taylor was caught stealing third for the second out. With two outs and nobody on base, Bryant rallied. Lessenberry walked and scored all the way from first when Grant laced a double over the third baseman’s head all the way to the corner. McEntire then singled on a ball in the hole to the shortstop which let Grant get to third. On the first pitch to Catton, McEntire sprinted halfway to second, drawing a throw from the catcher that allowed the speedy Grant to steal home and make the lead 5-2.

Benton threatened again in the third but failed to score. After a walk to the number nine batter, the leadoff hitter slapped a single to center but Catton quickly scooped up the ball and made a strong throw to third to nail the runner trying to advance all the way from first. Chambers then retired the next two, including his first strikeout of the night, to end the frame.

Bryant had a chance to blow the game open in the fourth when they loaded the bases with one out on a walk and two Benton errors. Benton brought their infield in and the strategy worked as Greiner hit into a fielder’s choice with Chambers being forced out at home. Lessenberry then grounded to second to end the inning and keep the score at 5-2. 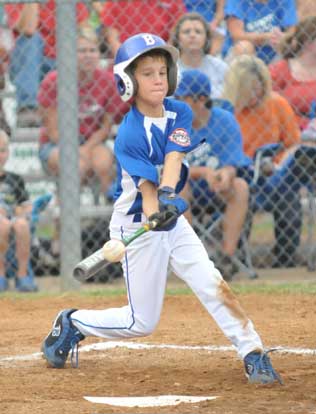 Chambers allowed a walk and a single in the bottom of the fourth but struck out two and got a fly ball to center and sent his team to the fifth inning with a three-run lead. Grant led off with a walk. McEntire laid down a sac bunt to the pitcher. Grant took second and, seeing that the third baseman had not retreated to the bag, made an attempt for third. Benton’s shortstop beat Grant to the bag and Benton’s first baseman made a good throw to retire Grant and end Bryant’s threat.

In the bottom of the fifth, Benton made one last threat. After Chambers retired the first two, Benton collected three consecutive well-hit singles to load the bases. Bryant then ended the inning on a grounder in the hole that shortstop Grant fielded and flipped to third baseman Dupree.

In the sixth, Bryant tacked on an insurance run to make the score 6-2. With one out, McFarland walked. He moved to third on two wild pitches and scored on a big two-out single to center by Holt, who had entered for Cowell in left field in the fourth.

Three outs from a complete game, Chambers retired the leadoff batter on a grounder to shortstop but then walked the following batter and was replaced on the mound by Grant. The next batter fouled off two pitches with a full count on him before drawing a walk to put runners on first and second. Grant retired the next hitter on a come-backer to the mound while the runners moved up a base. With Benton’s dangerous leadoff batter at the plate, catcher Lessenberry made an outstanding defensive play to end the game as he made a diving catch of a foul ball halfway down the third baseline against the fence.

The Bryant 9-year-old All-Stars begin their quest for the state title at 2 p.m. Friday, July 9, at Jacksonville. 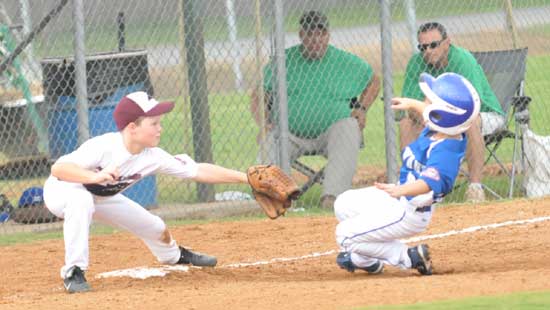 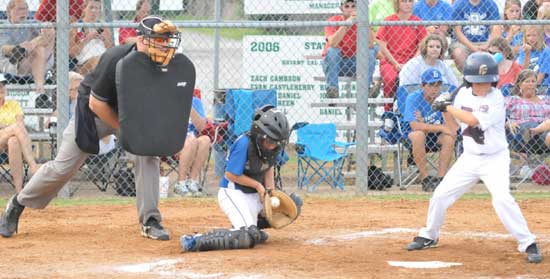 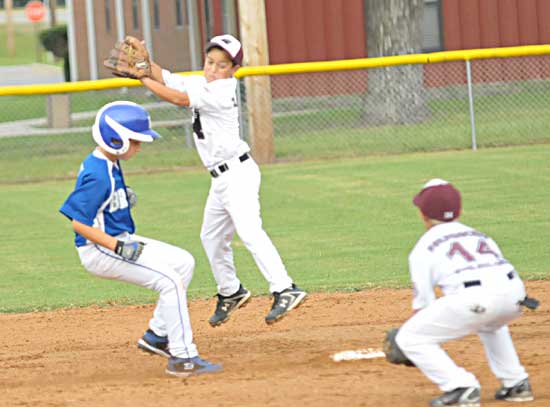 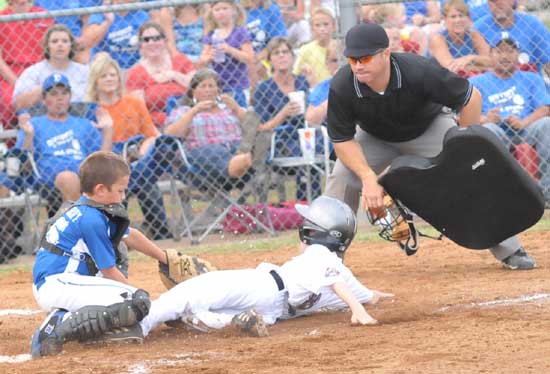 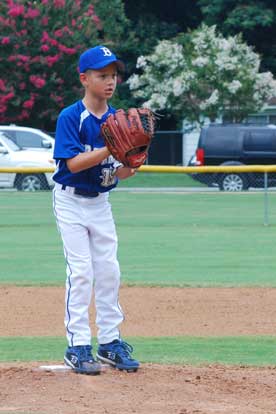 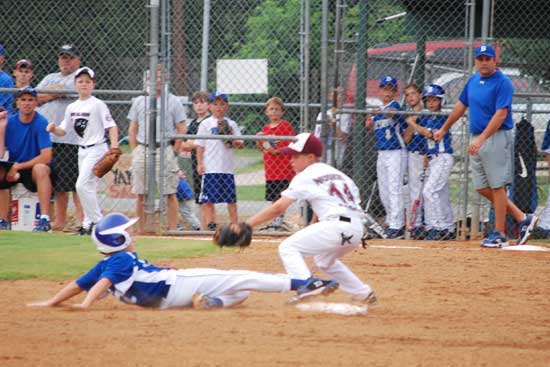