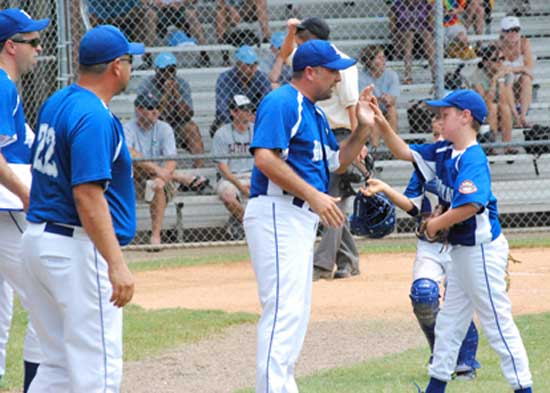 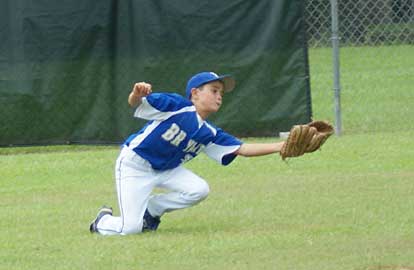 ZACHARY, La. — The Bryant 9-year-old All-Stars’ quest for a regional championship to go along with their state and district titles ended in the semifinals of the 2010 Cal Ripken Southwest Regional on Tuesday, July 27, with a tough 3-1 loss in a pitcher’s duel against Little Rock Junior Deputy.

Although Bryant had defeated Little Rock in each of their four previous meetings this postseason, they had not faced the starting pitcher in this game, who would fan 10 batters while walking four and allowing just one hit. The Little Rock manager said after the game that, although the pitcher had played in every game against Bryant, he had only recently begun pitching again after he recovered from a sore arm.[more]

Starting pitcher Will McEntire turned in an excellent performance, striking out nine batters while allowing just two hits and two walks in five innings. Unfortunately for him and his teammates, the walks and hits, along with Bryant’s lone error, came in succession with two outs and no one on base in the third inning and produced all three of Little Rocks runs. 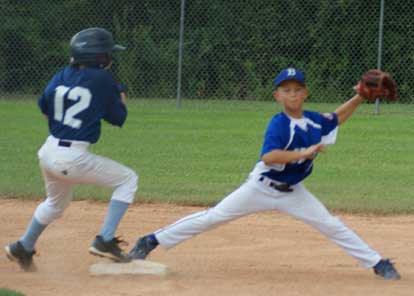 After a 15-minute delay because the umpires were late getting to the game, Little Rock went down in order in the top of the first, as McEntire got a pop up behind the mound that he fielded himself, a swinging strikeout, and a grounder to Dupree at third. In Bryant’s half of the inning, Little Rock’s pitcher needed just 11 pitches to record swinging strikeouts of Catton, Chambers, and McFarland.

McEntire matched that in the top of the second when he fanned the three batters that he faced, two of them swinging. Dupree walked to lead off the second, but Grant popped up a bunt attempt for the first out and then Greiner and Cowell struck out.

In the top of the third, McEntire began the inning with a strikeout, his fourth consecutive, and then got an out on a hard line drive that Catton caught on one knee in center field. After retiring the first eight Little Rock batters, McEntire fell behind their number nine hitter 3-0 before battling back to walk him on a 3-2 pitch. The leadoff batter then walked, also on a 3-2 pitch, and suddenly Little Rock had two runners on. 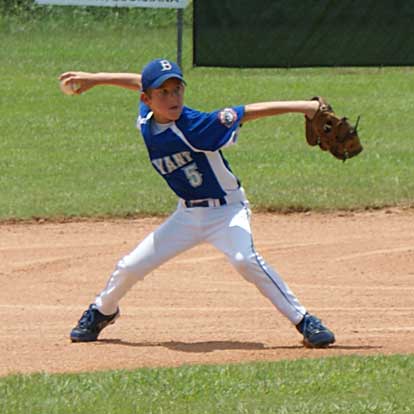 The next batter reached on an error to load the bases as McEntire made a back-handed stab at a hard one-hopper back up the middle, only to have the ball go off his glove and land behind the mound. Little Rock’s cleanup hitter then stepped in and cleared the bases on the second pitch with a line drive double into the left field corner. A bunt single, followed by a stolen base, put runners on second and third, but McEntire whiffed the following batter. However, Little Rock now led by a score of 3-0.

Trying to rally quickly, Bryant scored its only run in the bottom of the third. McEntire led off and the first pitch hit his foot. Lessenberry walked to put two runners on. Catton dropped down a bunt to move the runners up and almost reached on an error as the Little Rock pitcher fired a throw right at the ankles of the first baseman, who made a good play to get the out and keep the ball from going into right field.

With two runners in scoring position, Chambers collected Bryant’s only hit of the game with an RBI-grounder up the middle that was just out of the shortstop’s reach. McEntire scored on the play, Lessenberry moved to third, and Chambers took second on the throw. McFarland struck out for the second out before Dupree walked to load the bases, but Bryant failed to score when Grant grounded back to the pitcher who forced Lessenberry out at the plate. 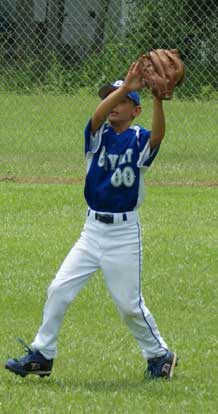 After the rough third inning, McEntire cruised through the fourth with a fly ball to Greiner in right and two strikeouts, with both batters looking at strike three. In the bottom of the fourth, the Little Rock hurler picked up three swinging strikeouts, just as he had back in the first inning. This time the victims were Greiner, Cowell, and McEntire.

In the top of the fifth, Little Rock went down 1-2-3 again. McEntire started the inning with his ninth strikeout and then threw out the leadoff hitter, who attempted to reach on a bunt. A grounder to Chambers ended the inning.

In the home half, Bryant had a grounder to third by Lessenberry and a strikeout by Catton, before Chambers walked to bring the tying run to the plate. But McFarland popped to the pitcher on a 0-2 pitch and the game moved to the final inning.

Grant relieved McEntire on the mound to start the sixth. He plunked the first batter on the helmet to put a runner on, and then got a 6-4 force out on a nice back-handed play in the hole by Chambers at shortstop. The next batter singled sharply to right field and McEntire fired to second base hoping for a force out, but the runner beat the throw and Little Rock had two on. The next batter ripped a line drive at Chambers who made the long throw to first to double the runner off first base. Initially, the base umpire ruled him safe, but after conferring with the home plate umpire who had the better angle, the runner was called out to send Bryant into their last at-bat trailing by two runs. 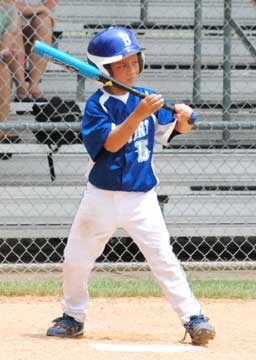 Because he had pitched one inning the previous game, Little Rock’s starting pitcher had reached the maximum of six innings pitched in consecutive games and had to be removed from the game. Unfortunately for Bryant, the new pitcher picked up where the starter left off when he struck out Dupree to lead off the inning.

A sudden rain shower then forced a 30-minute delay in the action. When play resumed, Grant walked on a full-count pitch, but then Greiner struck out swinging for the second out. With one out to go, Nguyen was called on to pinch-hit for Holt, who had replaced Cowell in left field in the fifth inning. On an 0-2 pitch, Nguyen appeared to have foul-tipped a high pitch past the catcher and all the way to the backstop. But the umpire ruled that the bat did not make contact with the ball and that it was a swinging strikeout, which ended the game.

Bryant manager Catton argued briefly, but after the home plate umpire conferred with the base umpire, the call stood and Little Rock had won 3-1.